Does May 21 ring a bell? In 2011, it was the day that should’ve been the last day on earth for devout Christians, according to Harold Camping.

Camping is my favorite doomsday prophet. If he’s not for you, I’m sure he’s in your top five. He used the infallible science of numerology to conclude that May 21, 2011 would be the date of the Rapture®. Good Christians would be whisked off the earth to avoid the horror of Armageddon, the final battle in which the blood would flow as high as a horse’s bridle for more than a hundred miles. Our reality would end five months later. Camping spent $100 million on advertising to warn the world, including putting his message on 3000 billboards. 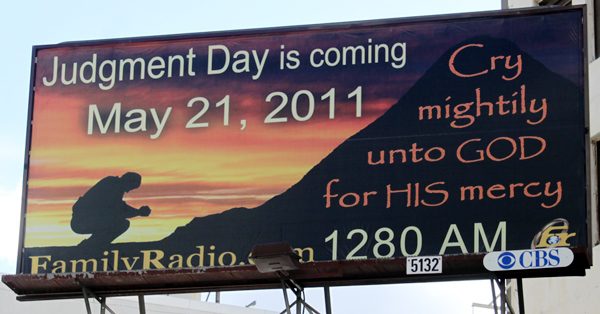 Who could be surprised? Camping was wrong. May 21 came and went and he and his Christian friends were still here, so he declared it “an invisible judgment day” but was certain that the world was still on the chopping block.

If you remember those Bible verses stating that the end would be a surprise and that even Jesus didn’t know it, don’t forget that the Bible can argue for just about anything. Camping found verses that make a convincing argument that Man can indeed know the time of the end.

And then, of all the bad luck, the world didn’t end five months later as predicted. Too little and too late, he finally realized his mistake and publicly admitted it.

While many of Camping’s followers spend their life savings to make themselves right with God, Camping did not dissolve his $100 million radio empire and donate it to the needy in anticipation of the end. It was almost like he didn’t believe his own preposterous story. He didn’t even compensate his followers who had lost so much in believing him.

Camping was recalled to heaven in 2013, perhaps to consult with God on the timing of the End. His Family Radio web site has since scrubbed away all mention of this humiliating debacle.

Camping’s mistake was being specific. He actually tried to make a testable, precise prophecy using the rules that we all follow when demanding a prophecy from the other guy. Christian apologists swoon at feeble biblical “prophecies” like those in Isaiah 53 and Psalm 22, but they’d laugh at them if they came from someone else’s religion. They know what makes a good prophecy, but they can’t see that their favorites aren’t even close.

For more of history’s end-of-the-world prophecies, see this infographic.

Doomsday prophecy must pay well, because it’s still popular among people who are either charlatans or deluded (it’s hard to tell for sure).

Street preacher Ray Comfort assures us that we’re in the end times, though his efforts crumble on critique.

John Hagee has invented a new, timeless Bible prophecy, the Prophecy of the Four Blood Moons. The concept is ridiculous, and the movie didn’t help. Three blood moons (that is: lunar eclipses) have come without incident, and the fourth will come on 9/28/15. Get the popcorn ready and come back here in about four months for some schadenfreude.

Hagee makes clear that this is just grandstanding with his book’s subtitle, “Something is about to change.” If God is giving us a message with these four blood moons, then what is the message? If Hagee is just going to pick some big event after the fact, where’s the prophecy?

I’ll note one final flabby Christian prophecy, this time a Catholic one. Dwight Longenecker (whose analysis I’ve recently critiqued here) handwaved that the Third Secret of Fatima indicated that big changes would happen by May 13, 2017, the 100-year anniversary of the apparition of Mary at Fatima. I’d try to make sense of it for you, but I’m sure I can’t.

You might think that Chicken Little’s false alarms don’t amount to much except to ridicule the Christians who enable and support this kind of thinking. Or you might feel outrage that these ridiculous Christian leaders and their Bronze Age thinking still exist in the twenty-first century. Either way, let’s remember groundless prophecies past and future on May 21, Harold Camping Day.

May 18, 2015
Christians Move the Goalposts When They Can't Win Honestly
Next Post

May 21, 2015 Debate Results!
Recent Comments
39 Comments | Leave a Comment
"I hadn't heard of him before - thanks. Born a year before me so definitely ..."
Michael Murray Irresponsible use of the awesome power ..."
"Barf!"
BertB God’s life is hell
"Baird puppets' number was a good parody of some of the stuff we sang in ..."
SecMilChap God’s life is hell
"Yeah, he died much too young. I often think that if he had lived another ..."
BertB God’s life is hell
Browse Our Archives
get the latest updates from
Cross Examined
and the Patheos
Nonreligious
Channel
POPULAR AT PATHEOS Nonreligious
1