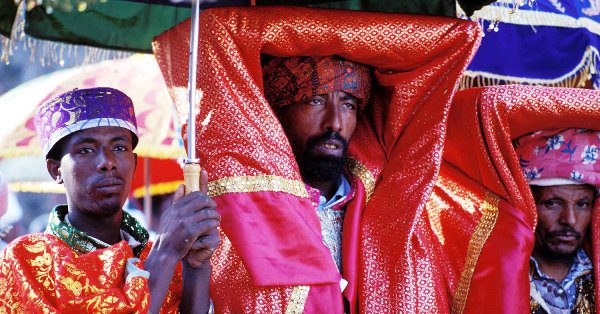 Dwight Longenecker, a Catholic blogger here at Patheos, gloated about the conclusions in “The Facts: Atheism is Dying Out.”

In journalism, that’s called “burying the lede.” No, that’s not really the story. Let’s explore in more detail how religion will change by 2050.

Christianity has been the 800-pound gorilla on the world stage, but Christianity is losing its edge. In 35 years, Christianity will be only negligibly larger than Islam, with 31.4% of world population vs. 29.7% for Islam. Islam is projected to be the number one religion by 2070.

Christianity will increasingly become an African religion. Africa is already the largest Christian continent, with slightly more Christians than North America. But by 2050, North America will have less than half of Africa’s Christian population (1.12 billion vs. 516 million).

This global movement of Christianity can be seen visually on a map showing the changes in Christianity’s center of gravity over time. In 33 CE, the center of gravity began in Palestine. Over the centuries, it moved through Asia Minor and Greece, then gradually westward as Christianity spread through Western Europe. By 1700, it was in northeast Italy, by 1800 in northwest Italy, and by 1900 (with the rise in the Christian population of the Americas) in Spain. By 1970, it had moved dramatically south and was in northwest Africa. Today, it’s roughly centered on Timbuktu, Mali, and it’s expected to continue moving southeast into Africa.

The Muslim fraction of Europe will almost double by 2050 to 8.7%. Islam in North America will continue to be tiny, with 2% of the population.

In Africa, however, Islam will more than double to 960 million. The big winner will be Asia, with 1.74 billion Muslims in 2050. The top four Muslim states will be India, Pakistan, Indonesia, and Nigeria.

The number of people unaffiliated with any religion (which includes atheists) will increase, but as a percentage of the global population, this group will decrease, from 16% to 13%.  This is the statistic that Longenecker was gleeful about.

But there’s more to the story. For most religious groups, the difference between those switching in (adopting the religion) roughly matches those switching out. Christianity, however, is the big loser here, with a net loss of 66 million by 2050. The Unaffiliated will see a net increase of about the same amount. Christianity may not be that sticky a meme after all.

Changes in the United States

Consider projected changes in Christianity vs. Unaffiliated in the United States.

Unlike changes in worldwide statistics, Christianity in the U.S. is the big loser (78% to 66%) and Unaffiliated the big winner (16% to 26%). That is, the Unaffiliated category appears to be winning the only race that one can be proud of winning, the intellectual debate in the marketplace of ideas.

While Christianity can win a demographic race as long as Christians make more babies, movement by intellectual migration does not favor Christianity.

Could upcoming changes in America predict how the whole world will go?

Notice where these worldwide demographic changes are coming from: more babies. Islam will soon surpass Christianity not because Islam explains reality better or because Allah is the one true god, but for no more profound reason than that Muslims are making more babies. (Which is also largely how Christianity became #1.)

The fertility rate is now 3.1 children per woman for Muslims and 2.7 for Christians. One option for Christians nervous about these changes is to have more babies, which is what the Quiverfull Movement is all about (critiqued here).

Demographic changes in religion are now driven by fertility, but as that factor wanes, what will change? Religion will no longer win simply by cranking out a surplus of indoctrinated babies and will have to compete on an intellectual footing.

To see how this may play out, consider world population charts with a sharp upward bend beginning several centuries ago as clean water technology, sewers, vaccines, antibiotics, and modern medicine reduced infant mortality. Modernity slowly brought the birth rate down, but this happened unevenly through the world. The population in Europe and the United States is now shrinking, but it is still growing dramatically in other parts of the world, most notably in central Africa. (Religion thrives where social conditions are poor, which is one reason why Christianity and Islam are spreading in central Africa and Arab countries.)

The drop in fertility rates means that the developing world will follow the West. Might the same secularization predicted for the United States happen there as well? The developing world has adopted Western technologies, they are following Western drops in fertility, and perhaps the United States of 2050—where “no religion” will be a viable and growing option to Christianity—will also be their future.

Whether atheism (or simply None of the Above) will continue to make inroads in Christianity as it’s projected to do in America for the next few decades is unclear. What seems almost certain, though, is that the time of fertility-driven growth will be over.

(Instead of Christianity becoming merely irrelevant, I propose a soft landing for it here.)

Limitations to predicting the future

Let me pause and note that the Pew Research study is careful to list caveats. The conclusions may be wrong if they’re based on flawed assumptions. For example, Pew doesn’t speculate on what social conditions might drive atheism, and Christianity’s future in China is hard to predict.

Father Longenecker (the “Atheism is Dying Out” author) adds his own speculations of events that would change the picture. Some make sense—a global war, natural disaster, or Christian revival in the West. And some are ridiculous—God uses magic to convert Muslims to Christianity or makes birth control pills stop working.

Let me add a few on the atheist side of the ledger. Suppose the Catholic Church figured out that preventing a conception isn’t the same thing as killing anything and lightened up on their antagonism against contraception. Or even allowed abortion. Christian denominations have been fine with abortion in decades past. If the rapid rise of the anti-abortion movement in the United States is possible, the reverse is conceivable as well.

Suppose Islam gets its Enlightenment. Christians can (and sometimes do) find support for regressive policies in the Bible that are out of touch with modern society. If Christians can dismiss nutty stuff in their holy book, Muslims could, too.

Suppose secularism catches on. Maybe there’s a snowball effect waiting to happen, and once enough Unaffiliateds or atheists go public with their unbelief, others will follow their lead—first the doubters who attend church because they feel they must and then other believers who unexpectedly have a new option to consider.

What do we actually want to drive the world’s beliefs?

What’s glaringly missing from Longenecker’s analysis is “Christianity will win out because it’s, y’know, true.” He could argue that true things have staying power and Christianity simply explains the world better.

Nope—he throws in the towel on the intellectual debate and doesn’t even acknowledging it. He’s simply rooting that Christians have more babies. (I’m beginning the see the value in conservative Christians’ recent redefinition of marriage to be all about making babies.)

Longenecker is like a General Mills executive fretting that Cheerios will lose its popularity in the breakfast cereal aisle. His claims that Catholicism explains life’s big questions are as well grounded as that Cheerios does. Without an intellectual grounding, Catholicism falls in with Cheerios as lifestyle features.

Once this baby-driven phase of religious expansion ends in the next few decades so that the effects of intellectual migration are clearer, it will be interesting to see who wins. The early indication doesn’t support religion.

May 13, 2015 The Future of Christianity and Atheism
Recent Comments
532 Comments | Leave a Comment
"Frustrating. Maybe in a month, the birth pains will be a memory? Hopefully that's more ..."
Bob Seidensticker New Testament Manuscript Reliability: the Visual ..."
"Not sure how that worked but I signed up and was given the option to ..."
MR New Testament Manuscript Reliability: the Visual ..."
"I've alerted OnlySky about your not getting notified about the grand opening. I've looked on ..."
Bob Seidensticker New Testament Manuscript Reliability: the Visual ..."
"Hey, everyone! We're live at https://onlysky.media/bseid... !"
Bob Seidensticker This blog is moving!
Browse Our Archives
get the latest from
Nonreligious
Sign up for our newsletter
POPULAR AT PATHEOS Nonreligious
1