The Sin of Sodom was Homosexuality … Or Was It?

The Sin of Sodom was Homosexuality … Or Was It? June 19, 2015 Bob Seidensticker

While on a business trip to Japan in the ’90s, I came across an interesting brand of bath salts. In bold letters across the top of the bag was the word “Sodom.” Salt, Sodom—yes, I see the connection, but that’s not the happiest image to attach to your brand. 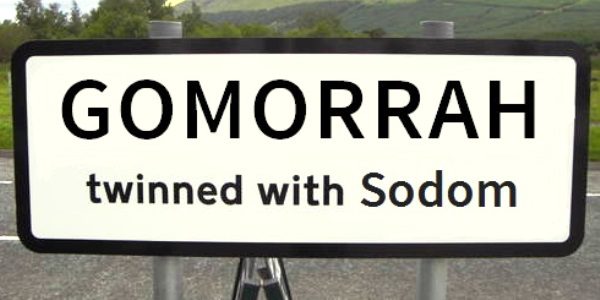 On a Stand to Reason podcast (“The Bible and Homosexuality,” 9/2/12), Greg Koukl unsurprisingly thinks that the point of the Sodom and Gomorrah story recounted in Genesis 19 is that homosexuality is bad—bad enough, in fact, to get your city destroyed.

He kicks around an alternative possibility, that poor hospitality was really the sin of Sodom. Remember that Lot offered hospitality to the two visiting angels, but the men of Sodom threatened their safety. Koukl rejects this option. And if the sin isn’t lack of hospitality, what could it be but homosexuality? Apparently, he can only imagine two possibilities.

He concludes that “the scripture speaks clearly on this … don’t twist what it says.” I agree, both that the issue wasn’t hospitality and that we mustn’t twist the scripture to make it say what it doesn’t.

Koukl looks to other parts of the Bible for their interpretation. One cross-reference is in the book of Ezekiel. In chapter 16, the faithlessness of the Jews is portrayed with Jerusalem being analogous to an adulterous wife. Other cities are likened to wicked sisters, and one of these is Sodom.

What are wicked Sodom’s crimes?

Now this was the sin of your sister Sodom: She and her daughters were arrogant, overfed and unconcerned; they did not help the poor and needy. They were haughty and did detestable things before me. Therefore I did away with them as you have seen (Ezekiel 16:49–50).

If homosexuality were Sodom’s crime, wouldn’t this be the only thing on the list? Instead, we have arrogance, lack of concern for the needy, and unspecified “detestable things.” This gives no tangible support for the Homosexuality Hypothesis.

In fact, it’s pretty clear from the Genesis story itself that homosexuality wasn’t the issue.

1. Lot makes this clear. Lot was a resident, and he understood the townspeople. If the men were all gay, he’d know it, and he wouldn’t bother offering them his daughters as a substitute, which he does in Gen. 19:8.

As an aside: it doesn’t say much for the morality of the city’s most godly man that he offers his daughters as if they were just sex toys. And if this is unthinkable today, why would it be an option thousands of years ago? So much for the idea that morality is objective and unchanging.

Lot also had sex with his daughters (which, despite long lists of forbidden familial couplings in the Bible, is incredibly not forbidden). But somehow, Lot is still the hero of the story.

2. An all-gay city wouldn’t be sustainable. “All the men from every part of the city of Sodom—both young and old—surrounded the house” (Gen. 19:4). So “all the men” were gay? How could there be children if all the men were gay? Such a city would simply die out. And why wouldn’t that be an option for God? Just give Sodom a few decades and let the population fade away.

3. Seriously? A city with all men gay? Homosexuality wasn’t studied when it was taboo, but we now know that only a few percent of society is homosexual. Anyway, why would godly Lot stick around if the city was so detestable? Perhaps for literary purposes?

4. Can we assume that there were no women? There is no evidence that this is an all-male city. “All the men” makes clear that this is not everyone, and so some must’ve been left behind. The straightforward interpretation is that all the men came to Lot’s house, that the women stayed at home, and that the women were mothers, wives, and daughters as in any ordinary city.

5. We have a better explanation. Gang rape is less about pleasure than about humiliating or establishing dominance. That the local men wanted to bully or dominate the visitors seems a better explanation than that they were just eager for sexual pleasure.

As we study the story, however, let’s not dismiss the violence. No one can question that there was significant evil in Sodom (even if it’s just legend) when visitors are threatened with gang rape. But what was the sin of Sodom? This is a story of attempted rape. Yes, it was homosexual rape, but the homosexuality isn’t highlighted as the crime.

Koukl is right that we shouldn’t twist the story, but he seems to be the one with the agenda. Only with a desire to find anti-gay messages in the Bible can we imagine one in the Sodom and Gomorrah story.

What’s also clear is that this has nothing to do with the loving, monogamous, homosexual relationship that is the subject of today’s discussion of same-sex marriage.

Every time you see a rainbow,
God is having gay sex
(seen on a bumper sticker) 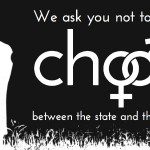 June 17, 2015
Conservatives Will Hold Their Breath to Get Their Way
Next Post 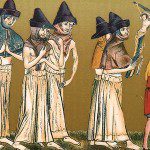