The Kim Davis Discussion Must Include JFK

The Kim Davis Discussion Must Include JFK September 8, 2015 Bob Seidensticker

Kim Davis is the county clerk in Kentucky who prohibited her office from issuing any marriage licenses because, “To issue a marriage license which conflicts with God’s definition of marriage [that is, straight marriage], with my name affixed to the certificate, would violate my conscience.”

That seems odd, because as a candidate she never admitted that she’d pick and choose the laws she’d follow. In fact, she promised to “follow the statutes of this office to the letter.”

Davis justified her reversal by arguing that the “So help me, God” tacked on to her oath of office meant that acting on her Christian beliefs was obligatory and trumped the laws she was promising to uphold. There are two small problems with this: that phrase is not part of the official oath (nor is the Bible you might put your hand on), and if she swore to God to uphold the law, she’s now breaking that oath. (A thoughtful analysis of this is by Noah Feldman.)

An easy solution leaps to mind: if you can no longer perform your job, quit. You could even make a bold statement by saying that a government job that pays $80,000 per year isn’t worth compromising one’s principles. But no, she wants it both ways. She imagines that she gets to apply her personal interpretation of Christianity to her job. So presumably every other government official gets to apply their individual religious interpretations to their jobs?

At least Sharia law isn’t quite so chaotic.

I wonder how deeply Davis has thought this through. The Bible says all sorts of crazy stuff in favor of slavery, genocide, and polygamy. Since she picks and chooses which secular laws to follow, I suppose she feels comfortable doing the same with God’s laws. Jesus himself said, “Whoever marries a divorced woman commits adultery” (Matthew 5:32). Before her current grandstanding, did she enforce that rule, too?

Davis began her job in January, 2015, when she knew that same-sex marriage might become legal within months, but she swore her oath of office anyway. She’s like the pacifist who willingly joins the infantry, knowing that killing the enemy was a possibility. And now that her unit has been deployed to a war zone, this pacifist decides that she won’t do her job.

(Davis had been in jail for contempt, but she was released 9/8/15 with the constraint that she can’t interfere in her deputy clerks’ jobs of issuing marriage licenses.)

We’ve seen this before with JFK

John F. Kennedy ran for president in 1960. Some Americans were concerned that JFK, as a Catholic, would answer to the pope if elected president rather than the Constitution or the American people. One radio evangelist of the time said, “Each person has the right to their own religious belief [but] the Roman Catholic ecclesiastical system demands the first allegiance of every true member and says in a conflict between church and state, the church must prevail.”

In other words, how do we know that JFK won’t do a Kim Davis?

I believe in an America that is officially neither Catholic, Protestant nor Jewish; where no public official either requests or accepts instructions on public policy from the Pope, the National Council of Churches or any other ecclesiastical source; [and] where no religious body seeks to impose its will directly or indirectly upon the general populace or the public acts of its officials. …

I believe in a president whose religious views are his own private affair, neither imposed by him upon the nation, or imposed by the nation upon him as a condition to holding that office.

The U.S. Constitution calls the tune

Here’s the bottom line. God isn’t the chief executive—the president of the United States is. The Bible isn’t the supreme law of the land—the Constitution is.

Be not confused: the United States doesn’t exist and run because God said so; instead, Christians can preach and worship because the Constitution says so. If the law offends you, you can argue that it’s unjust, you can work to have it changed, or you can leave. We have a 100% secular constitution that defines a 100% secular means for making, changing, and upholding laws.

I hear Pakistan puts God first in their law—maybe you’d like that better.

“The sky is falling!”

Conservatives are quick to tell us that this incident is the beginning of overt Christian persecution. A Christian Post columnist said, “For years now I and others have been warning that committed Christians could soon face jail time in America for holding to our convictions.”

To anticipate some jobs that a devout Christian might belatedly realize conflict with biblical principles, HuffPo has a list of jobs to avoid. You wouldn’t want to be a clerk selling mixed fabrics (prohibited), fishing for shellfish (prohibited), or teaching as a woman (prohibited). Are these examples ridiculous? Then ditto a clerk who objects to same-sex marriage (not explicitly prohibited) but has no problem with marrying divorced people (prohibited).

Another Christian Post columnist said, “Every serious biblical Christian will have to consider what to do now—whether a baker being asked to provide a wedding cake for a same-sex marriage against her conscience, a county clerk faced with issuing a marriage license to a homosexual couple, or a pastor being requested to perform a wedding between two women or two men.” Let me answer that for you: the baker is obliged to follow public accommodation laws that prohibit discrimination, county clerks must do their jobs, and the U.S. has laws protecting pastors.

This last one is always on the list, even though pastors are protected, both by the First Amendment and by Supreme Court precedent. Remember Loving v. Virginia, the Supreme Court decision that made mixed-race marriage legal? That is binding only on governments, not pastors. Pastors can and do refuse to perform mixed-race marriages. The same is true for same-sex marriages. Even the Family Research Council (a Christian organization) agrees. Hysteria about constraints on the clergy is popular because it rallies the troops, not because it’s realistic.

This reminds me of Glenn Beck’s hysteria on the eve of the Obergefell decision legalizing same-sex marriage. He declared that there were upwards of 10,000 pastors “that I think will walk through a wall of fire, you know, and possible death.”

Who did he imagine on the other side with the flaming torches?

Rosa Parks was the African-American woman who refused to sit in the back of the bus in 1955. One of Kim Davis’s supporters finds much similarity between the two women. If Rosa Parks shouldn’t have to get off the bus, why should Kim Davis? He asks, “Will Kim Davis be the Rosa Parks of the movement?”

The difference, of course, is that Rosa Parks had her civil rights infringed upon, while Kim Davis is trying to infringe on the civil rights of others. If Kim Davis feels that the Bible has something to say about Obergefell, she can express that view, and every atheist I can think of will support her right to free speech. What she can’t do is impose that outside the law.

Will Kim Davis be the Rosa Parks of the conservative anti-same-sex marriage movement? A three-times-divorced person setting herself up as the arbiter of marriage might indeed be an appropriate saint for this ridiculous up-is-down and Ignorance-is-Strength movement.

Related post: “Being on the Wrong Side of History on Same-Sex Marriage? Worse than You Think.”

If you have to explain,
“I’m doing this out of love,”
it ain’t love.
— seen on the internet 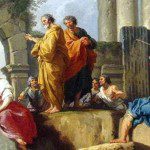 September 4, 2015
How Reliable is Apostle Paul When He Knew Very Little About Jesus?
Next Post 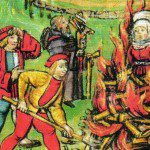