Rationalizing Away the “Canaanite Problem”

Greg Koukl is a polished Christian apologist, but he admitted to feeling inadequate against the problem of evil. He called the Canaanite genocide “the skeleton in our closet I didn’t want anyone to bring up.”

But not anymore. Koukl gives his analysis of the Canaanite problem, with a thorough rebuttal to the problem of evil. He concludes, “I am no longer leery of the topic.” 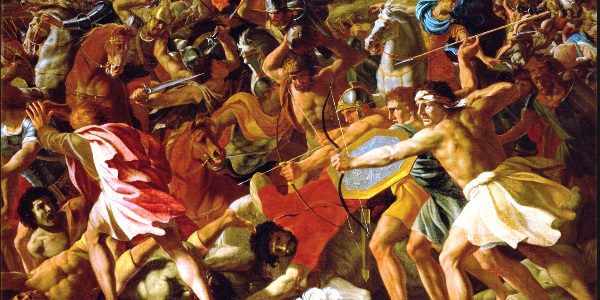 He begins with Dawkins’ famous line, “The God of the Old Testament is arguably the most unpleasant character in all fiction.” He notes in passing,

It seems ironic that an atheist who denies the existence of objective morality can overflow so readily with moral indignation.

And I’ll ask in passing, Where’s the difficulty? Objective morality is in your mind only. Dawkins refers to the regular kind. You think that morality is objective and that we humans can access it? Show us. I’ve seen no evidence.

Koukl then lists some of the bloodthirsty passages in the Bible: God’s command that the Hebrews “utterly destroy” the tribes they will find in Canaan (Deuteronomy 7:1–5), the command that within the tribes that must be destroyed, “you shall not leave alive anything that breathes” (Deut. 20:16–18), and the command that, for the Amalekites, Israel should “put to death men and women, children and infants” (1 Samuel 15:2–3). To see one interpretation of what that looked like, see the painting above.

Tap Dancing for the Lord

First up in Koukl’s explanation is the observation that the Bible must be understood in its context. Military narratives of the time were often exaggerated, so we can’t take God’s genocidal commands literally.

Koukl’s second point: don’t worry too much about God’s demands for genocide, because, despite what the Bible actually says, the fighting must’ve been directed only at military targets and not at families.

No, the issue isn’t how faithfully the Israelites carried out God’s commands; it’s that God himself demands genocide. That the Bible is historically unreliable is secondary to its barbaric portrait of God.

If God did not command the utter and indiscriminate destruction of men, women, and children by Joshua’s armies, but simply authorized an appropriate cleansing military action to drive out Israel’s (and God’s) enemies—then the critic’s challenge is largely resolved.

So this was just a “cleansing military action”? Later, he calls the conquest, “an exercise of capital punishment on a national scale,” and he calls the death of children “collateral damage.” Ouch—talk about unfortunate euphemisms! No surgical strikes for this ham-fisted God. He only has the nuclear option.

Sorry—genocide is genocide. And Koukl’s own Bible selections show that God wasn’t “driving out” the inhabitants but murdering them. Pointing out that the Bible is historically untrustworthy doesn’t get you out of this bind. The issue isn’t what happened, it’s what we learn of God’s personality.

Koukl then takes another approach: the Canaanites actually deserved to die.

God was angry. Indeed, He was furious. And with good reason. Even by ancient standards, the Canaanites were a hideously nasty bunch. Their culture was grossly immoral, decadent to its roots.

Koukl lists divination, temple prostitution, homosexuality, transvestitism, and other sins, but the worst is child sacrifice. I don’t care about a god taking offense at a “sin” that hurts no one, but we’re on the same page with the child sacrifice. His source cites evidence that thousands were killed in total.

But this rationalization runs off the tracks when we consider God’s remedy to a Canaanite culture that sacrifices children: genocide. Is the irony not obvious? God has every child killed in response to their killing a few children … and then has every other person killed for good measure.

Why does God’s palette of options include nothing more refined than would occur to a king of that time? God couldn’t teleport the Canaanites elsewhere in the world? Make their women sterile 50 years earlier? Poof them out of existence? Turn them into birds? He couldn’t create some new land so the Israelites wouldn’t need to steal someone else’s? He couldn’t drown Noah’s son Ham, the patriarch of the Canaanites, to stop the problem before it started? God is looking increasingly like a literary device added to justify the story the Jews told about themselves.

And why imagine that God is all that annoyed about child sacrifice? To teach the stiff-necked Israelites who’s boss, God said:

So I gave them other statutes that were not good and laws through which they could not live; I defiled them through their gifts—the sacrifice of every firstborn—that I might fill them with horror so they would know that I am the LORD. (Ezekiel 20:25–6)

That’ll teach ’em a lesson! Child sacrifice wasn’t an inconceivable horror to God but simply a tool. At one point in the Bible story, human sacrifice by a tribe is justification for their genocide. At another point, human sacrifice is just a humiliation that God himself uses to make a point.

A Plea for Consistency

Koukl finally calls atheists hypocritical when on the one hand they object to God’s brutal sense of justice in the Bible but on the other hand would demand that God act to stop awful events today. How about some consistency, atheists—do you want God to act or not?

Actually, it’s the atheists who are the consistent ones. A “good” god would not demand genocide in the Old Testament and would actively make the modern world a better place. The Sandy Hook school killings? 9/11? The Holocaust? Making God compatible with reality means that he can only be not good, nonexistent, or unjudgeable.

See also “Not Even Hitler Can Help This Christian Argument.”

God, Satan, angels: these were all figments of human imagination.
From now on I could step firmly on the ground that was under my feet
and navigate based on my own reason and self-respect.
My moral compass was within myself,
not in the pages of a sacred book.
— Ayaan Hirsi Ali 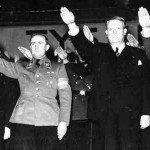 October 13, 2015
Not Even Hitler Can Help This Christian Argument
Next Post 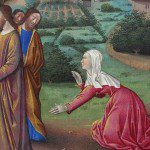