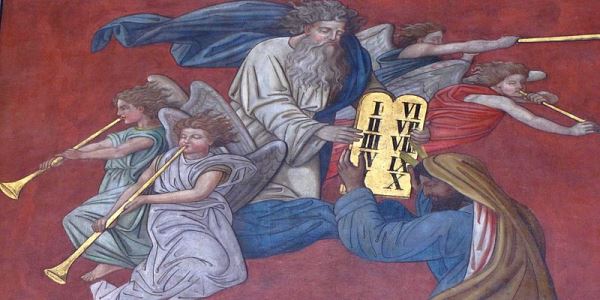 Read part 1 of this series on an American Atheist monument installed on public property in Florida as a protest against a Ten Commandments monument. This post will conclude my response to criticism of the monument.

The right side of the monument lists Old Testament punishments for breaking any of the Ten Commandments. A law is only a law if there are consequences for breaking it—otherwise it’s just a suggestion. Let’s see what the punishments are.

For breaking the “have no other gods before me” commandment:

Stone them to death, because they tried to turn you away from the Lord your God. (Deuteronomy 13:10)

For breaking the “no blasphemy” commandment:

Anyone who blasphemes the name of the Lord is to be put to death. The entire assembly must stone them. (Leviticus 24:16)

For breaking the “keep the Sabbath day holy” commandment:

Whoever does any work on the Sabbath day is to be put to death. (Exodus 31:15)

And so on (the full list is here). Though not true for every commandment, death is the go-to punishment. Death for killing. Death for adultery. Death for sassing your parents.

Let’s review the story. Moses gets the Ten Commandments on Mt. Sinai in Exodus 20, but the anxious Israelites make a golden calf during his long absence. When Moses sees this, he’s furious and smashes the tablets of the law. He gets a new set in Exodus 34. At the conclusion of this list, we read:

And [Moses] wrote on the tablets the words of the covenant—the Ten Commandments (Exodus 34:28).

Critique of the American Atheist monument

Let’s get back to the critique of the monument by Benjamin Wiker. About American Atheists’ use of the punishments to show the brutality of Old Testament Law, he says,

Again, we have monumental ignorance, or at least confusion.

Ouch! Looks like someone is about to get disciplined.

First, these come from the Old Testament Law that is directed at the ancient Israelites themselves.

So the Old Testament is irrelevant today? I’m surprised that we’ve so quickly found a point of agreement. But dismissing unpleasant bits of the Old Testament as applying only to the ancient Israelites won’t work.

God said, “If you obey me fully and keep my covenant, then out of all nations you will be my treasured possession. Although the whole earth is mine, you will be for me a kingdom of priests and a holy nation” (Ex. 19:5–6). In other words, the Ten Commandments and the rest of the law—all of it—is directed at the Israelites. If Christians put up a monument to Ten Commandments that applied only to ancient Israelites, then it’s just as reasonable for American Atheists to put up a monument highlighting the punishments for breaking those irrelevant commandments. (h/t commenter UWIR)

Second, and related, the atheists make no allowance for the moral and theological development that took place from the Old to the New Testament. Jesus Christ transforms the Law by mercy, even while he intensifies and purifies its moral demands.

Moral development? The Law is transformed? What kind of evolving Law is this?

I’d have thought that the omniscient creator of the universe would get the law right the first time. Or does moral action change with time?

Apparently we’re to believe that the Old Testament law was actually version 0.5 because, I dunno, the ancient Israelites were too stupid or barbaric to handle the real thing. And for centuries, the priests just handed out warnings until the Israelites could mature as a culture to handle the message of Jesus.

Nope—Moses came down with the new law, and it took effect immediately. There were no warnings and no slaps on the wrist. The punishment for many transgressions was death, starting immediately. Jesus says this about the Old Testament:

Till heaven and earth pass away, one jot or one tittle will by no means pass from the law till all is fulfilled (Matthew 5:18)

Third, while the American Atheists may disagree with the actual punishments, are they then also rejecting the moral foundation of all of the Ten Commandments? Is the prohibition against murder a bad thing? Against adultery? Against stealing? Against providing false testimony in court?

The Ten Commandments are religious and so are inappropriate for the state-supported public square. There, the U.S. Constitution rules, not the Bible.

And even more difficult for [atheists] to answer, in what way does atheism provide a moral foundation for these prohibitions? Atheism is almost invariably grounded on materialism, and that means that it’s not all that clear about why anyone should or shouldn’t do anything.

You don’t know where moral customs, taboos, and law come from? You can’t imagine a natural source? Take a civics class to learn where laws come from. Read an anthropology textbook to learn about morality. They don’t come from God.

To take one obvious instance, purely non-theistic evolution has one rule: nature works by the survival of the fittest, survival by any means.

It sounds like Wiker is twisting “Survival by any means” into “survival by few means: just the nasty ones.” It’s refreshing to debate a Christian who’s well-versed in what he’s attacking, but unfortunately, that’s not what we have here. “Survival of the fittest” (not a term coined by Charles Darwin, by the way) refers to how well suited an organism is to its environment. It’s the fit of a puzzle piece, not an athlete.

Fourth, as atheists tend to do, the American Atheists are simply lumping all religions indiscriminately together. But a moment’s thought about this would be a real wake-up call for them. It’s not among present-day Jews or Christians that you’ll be seeing calls for death for idolatry or blasphemy, but among Islamists.

Thank God most Christians are not faithful to their Old Testament.

I don’t think beliefs should be hereditary.
— Gregorio Smith (director of “Truth Be Told,”
a documentary film about leaving Jehovah’s Witnesses) 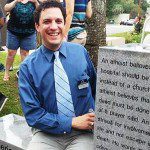 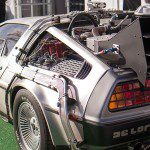