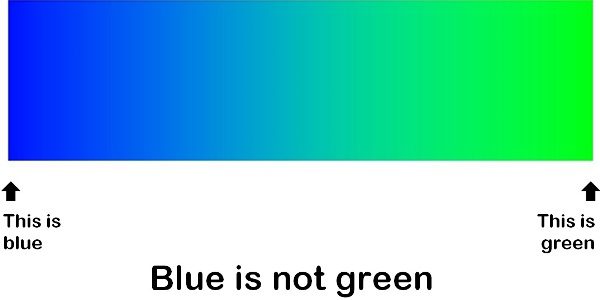 Since conservatives seem determined to get votes by making an issue out of abortion, I’d like to look at some of these arguments. At the Secular Pro-Life Perspectives blog, Clinton Wilcox rejected my spectrum argument supporting abortion. This is a particularly relevant response since he doesn’t use religious pro-life arguments.

My argument is more fully discussed in this post, but I’ll summarize it here briefly.

Consider the above figure of the blue-green spectrum. We can argue where blue ends and green begins, but it should be easy to agree that blue is not green. In other words, the two ends are quite different.

The same is true for a spectrum of personhood. Imagine a single fertilized egg cell at the left of the nine-month-long spectrum and a trillion-cell newborn on the right. The newborn is a person. And it’s far more than just 1,000,000,000,000 undifferentiated cells. These cells are organized and connected to make a person—it has arms and legs, eyes and ears, a brain and a nervous system, a stomach and digestive system, a heart and circulatory system, skin, liver, and so on.

Wilcox begins by praising the argument as having substance rather than simply demonizing pro-life advocates, so we’re off to a good start.

The immediate problem with this argument is that he gives no attempt to argue at what point we actually do become persons.

Yes, it’s important to get the OK/not-OK dividing line for abortion right, but that’s not my interest here. Legislators deal with tough moral issues all the time. Take the issue of the appropriate prison sentence for robbery. Six months? Five years? What mitigating circumstances are relevant? Does it matter if a gun was involved? What if the gun was used as a threat but it wasn’t loaded? What if some other weapon was used? What if someone was hurt?

It’s a person’s life we’re talking about, so the sentence must be decided carefully, and yet penalties for this and a myriad other specific crimes have been wrestled with and resolved in 50 states and hundreds of countries.

The same is true for the cutoff for abortion—it’s a tough decision, but it’s been made many times.

My focus here is not on the cutoff line. I’ll leave that to medical experts and policy makers who have more expertise and interest than I do.

He resorts to the tired old arguments that an acorn is not an oak tree (no, but it is an immature oak tree) ….

Nope. An acorn is not a tree at all. It’s a potential tree, and it may become one in twenty years, but it’s not a tree right now.

It may be true that a brain with one neuron doesn’t think nearly as fast as a brain with 100 billion neurons, but he misses the point that it is still a brain. It is just an immature brain.

No, it is a potential brain.

Analogy to the personhood spectrum

Let’s consider the brain by first considering an analogous situation with water. A single molecule of water does not have the properties of wetness, fluidity, pH, salinity, or surface tension, but these and other properties emerge when trillions of trillions of water molecules come together.

It hasn’t had the chance to develop into a fully mature brain.

He’s right, of course—it will be a baby. But the point is that it isn’t now. A future baby is not a baby. It’ll be a baby in the future.

The vastness of the spectrum

The spectrum argument fails to adequately address the fact that there is a continuity of human development that begins at fertilization and doesn’t stop until after birth. Logically, that suggests that teenagers are “more of a person” than toddlers ….

I addressed this in the original argument, but let me illustrate the issue with a quick round of “One of these things is not like the others.” Our candidates today are an adult, a teenager, a newborn baby, and a single fertilized human egg cell. Okay, candidates, raise your hand if you have a brain. Now raise your hand if you have a pancreas. If you have skin. Eyes. Nose. Bones. Muscles.

Now raise your hand if you have hands.

The difference between newborns, teens, and adults is negligible compared to the single cell at the other end of the spectrum, which has nothing that we commonly think of as a trait of personhood. The commonality across the spectrum is that they all have eukaryotic cells with Homo sapiens DNA. That’s it. That’s not something that many of us get misty-eyed about. Very little sentimental poetry is written about the kind of DNA in the cells of one’s beloved.

What do we call the spectrum?

The unborn may be less developed at the single-cell stage than the 100 trillion cell stage, but it is still a human person at that stage.

Wilcox wants to skirt the spectrum and say that it’s irrelevant or meaningless, but it’s everything to this discussion. A newborn is something that a single cell isn’t. Think of the many words we have for subtle distinctions after birth: newborn, baby, infant, toddler, and so on. Surely English has a label that Wilcox will find acceptable for capturing the difference between the cooing, crying, pooping, sleeping, eating newborn and the microscopic, insensate cell.

Be honest with the facts. Don’t try to pretend that this immense spectrum doesn’t exist.

[Seidensticker’s] comparison of the pro-life argument to PETA’s slogan of “a rat is a pig is a dog is a boy” is simply a false analogy.

Sounds like Wilcox missed my point. PETA tries to collapse a spectrum with this slogan. They want to argue that, no, we shouldn’t put animals into bins along a spectrum (in this case: vermin, livestock, pet, and human). Animals are animals—all the same.

Does Wilcox accept this? If he rejects PETA’s attempt to collapse or ignore this spectrum, then perhaps he sees the problem with ignoring the vast difference between newborn and cell.

Seidensticker’s point about how evangelicals thirty years ago supported abortion is simply irrelevant.

Not to people who bring up Christian arguments! If it doesn’t apply to a secular perspective, fair enough, but I was addressing more people than just you.

I have . . . soundly refuted the “spectrum argument.”

Gotta disagree with you there. You’ve mischaracterized it and sidestepped the argument. If you want to address it squarely, I’ll consider responding to your reaction.

If my oven quits working in the middle of making a cake,
do I call the undercooked mess a cake?
— Nate Frein 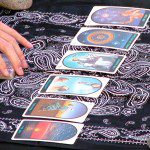 June 29, 2017
Make Your Very Own Prophecy (That Actually Comes True!)
Next Post 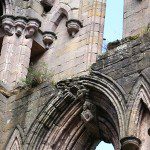 July 8, 2017 God is Always the Worst Explanation: 8 Reasons
Recent Comments
2,012 Comments | Leave a Comment
"This still never cites anything from him, so I'm left at the word of others."
John Grove Lee Strobel’s “Case for Christ”: the ..."
"We have lots of copies of several writings. It is safe to conclude that there ..."
Greg G. Bad atheist arguments: “History is unreliable”
"I think there are traces of "Christians" in the historical record. The epistles and the ..."
Greg G. Bad atheist arguments: “History is unreliable”
"What was the pre 4th century bible you claim predates Sinaiticus and Vaticanus and where ..."
Greg G. Bad atheist arguments: “History is unreliable”
Browse Our Archives
get the latest updates from
Cross Examined
and the Patheos
Nonreligious
Channel
POPULAR AT PATHEOS Nonreligious
1