Can the Star of Bethlehem Be Scientifically Verified? (2 of 2)

Can the Star of Bethlehem Be Scientifically Verified? (2 of 2) January 6, 2018 Bob Seidensticker 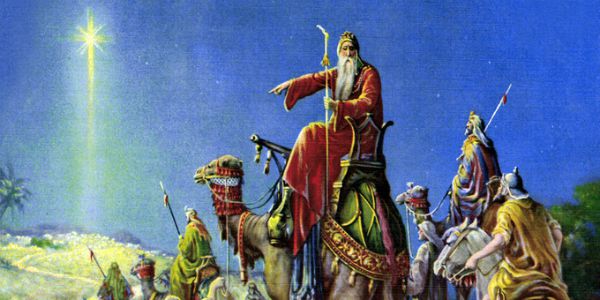 This is the conclusion of a summary of the video The Star of Bethlehem by Rick Larson. See part 1 for the preliminaries.

In part 1, I listed the nine points Larson pulled from the magi/star story in Matthew 2. He claims that Jupiter is the key player in a story that the magi would’ve been able to interpret for its symbolic meaning. He identifies four events in his Bethlehem star scenario that extend for a little over a year beginning in 3 BCE.

From a human standpoint, the stars in the sky seem fixed. Planets, however, gradually move against the fixed background of stars (the word “planet” comes from the Greek for “wanderers”). While they do move, and the magi would’ve known this, the motion is subtle. Only by looking night after night is this motion apparent.

Jupiter had not one but three conjunctions with Regulus (September of 3 BCE, then February the next year, and finally in May). Regulus is actually a four-star system, but the magi would have known it as a single, bright star in the constellation Leo.

Planets farther from the sun than earth (Mars and beyond) sometimes move backwards against the background stars. This is called retrograde motion. For example, Jupiter moves forward for nine months, backward for four months, and then forward again.

The three Jupiter/Regulus conjunctions are because of Jupiter’s retrograde motion. Looking at the symbolic meaning, the king planet Jupiter moved past the king star Regulus three times. Larson sees this as Jupiter crowning Regulus. And this happened in the constellation of the lion, the symbol of Judah (for example, “Like a lion [Judah] crouches and lies down, like a lioness—who dares to rouse him?” [Genesis 49:9–10]). He says that the magi would’ve known that Judah was getting a new king.

2. Revelation and the woman “clothed with the sun”

Revelation is full of unfamiliar symbolism, and Christians argue about precisely what it means. We’ll go with Larson’s interpretation.

A great sign appeared in heaven: a woman clothed with the sun, with the moon under her feet and a crown of twelve stars on her head. She was pregnant and cried out in pain as she was about to give birth. Then another sign appeared in heaven: an enormous red dragon. . . . The dragon stood in front of the woman who was about to give birth, so that it might devour her child the moment he was born. She gave birth to a son, a male child, who “will rule all the nations with an iron scepter.” (Revelation 12:1–5)

The woman is Mary, the child is Jesus, and the dragon is Herod (or Satan in the guise of Herod). On September 11 of 3 BCE, during the Jupiter/Regulus conjunction, the sun and moon are both in the constellation of Virgo. In other words, Virgo the virgin is clothed with the sun and has the moon at her feet (as mentioned in Revelation) at the same time that the king planet is crowning the king star in Judah’s constellation.

Next on the calendar was a very close Jupiter/Venus conjunction on June 17 of 2 BCE, so close that the distance separating them was about the apparent width of either planet. Specifically, they were about 40 seconds apart. (There are 60 seconds in a minute and 60 minutes in a degree and 360 degrees in a full circle. For comparison, a full moon is 30 minutes in diameter.)

The magi would’ve been familiar with conjunctions, and the remarkable thing about this conjunction wasn’t the brightness but the closeness. Conjunctions this close aren’t that rare astronomically, but they would’ve been unusual or unique in the lifetimes of these men.

4. The star stops over Bethlehem

The last element in this lightshow was the stopping of the star (Jupiter) over Bethlehem. Larson says that Jupiter’s switching directions from regular motion to retrograde or vice versa (there are two such switches every 13 months) counts as “stopping.” One of those “stopping” points was December 25 of 2 BCE (though he’s quick to state that this being Christmas day is just a coincidence, since the magi aren’t thought to have visited Jesus as a newborn).

This is an interesting set of facts, but Larson has 20/20 hindsight. He knows what he wants to find, so he scans the possibilities (moving Herod’s death as necessary) to find what he wants. The nativity story is feeble evidence that any magi could or did draw the conclusions Larson would like.

Perhaps you’ve had some questions as you read along. Here are some that come to mind for me.

Those questions and more discussed next in the critique.

It takes a certain maturity of mind
to accept that nature works
as steadily in rust
as in rose petals.
— Esther Warner Dendel

January 5, 2018
Can the Star of Bethlehem Be Scientifically Verified?
Next Post

January 9, 2018 WWJD? The Question with a Thousand Answers
Recent Comments
67 Comments | Leave a Comment
"The classical theists over at Strange Notions may not want to accept that, but that ..."
WCB God’s life is hell
"And 50% of the time makes a coin toss come up heads. On average. Praise ..."
Michael Murray Irresponsible use of the awesome power ..."
"I think you are correct that it isn’t a convincing argument. There was a blog ..."
Maltnothops God’s life is hell
"If you get the chance don't miss it."
Otto God’s life is hell
Browse Our Archives
get the latest updates from
Cross Examined
and the Patheos
Nonreligious
Channel
POPULAR AT PATHEOS Nonreligious
1