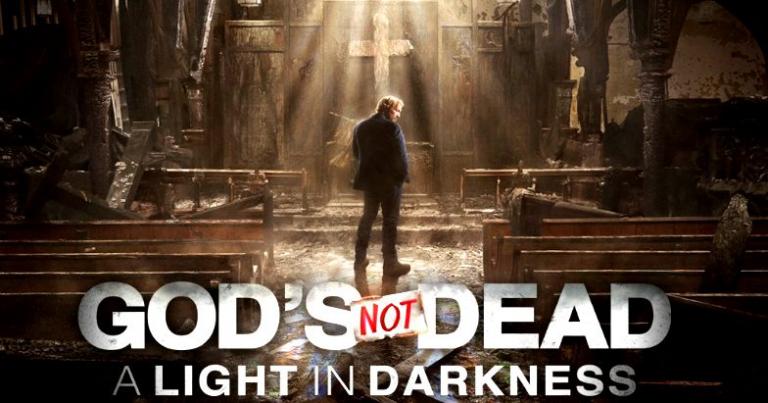 What better way to launch April Fool’s Day weekend than another episode of our favorite soap opera, God’s Not Dead? (For the previous two films, see my reviews of GND1 and GND2.) This is another film from the Christian studio Pure Flix.

We see a story continuity in #3 of this franchise, just as we saw in #2. This time, it’s Pastor Dave’s chance in the spotlight, and Josh (the hero from GND1) is his youth pastor. Like me, you’ve probably been holding your breath since the thrilling ending of GND2 two years ago where Pastor Dave was hauled off in handcuffs for disobeying a court order to disclose his sermons.

But the franchise has grown up. They’ve fired Chicken Little as the screenwriter, and the transparently unrealistic plot is gone. It’s still an overtly Christian film about people working through doubts and struggles, and God (in his own inept and nonexistent way) guiding each person to a stronger faith, but that’s a big improvement.

This is a gamble, and we’ll have to see if box office receipts show that Christians like a realistic story rather than fantasy.

Let me give the background to Pastor Dave in handcuffs. This situation was inspired by a real case in Houston. Conservative groups had filed suit against a new city ordinance supporting the rights of trans people. The city, as a small part of the discovery process for its defense, subpoenaed five local pastors. The mayor later retracted the request, not because it was inappropriate or illegal, but because the conservative groups played the victim and were changing the conversation to an attack on their religious freedoms.

Back to the film: Dave is now out of legal trouble, and the only point of that tiny episode was to identify him and his church as controversial. That puts him in a delicate position with the university, on whose land his church sits.

Pastor Jude (from Ghana), seen in the previous two films, becomes Dave’s assistant pastor. The two of them are leaving the church one night and hear breaking glass. They see someone run away. Jude goes in to investigate, not realizing that the brick broke a gas valve. He turns on the light and triggers an explosion. Dave drags him out, only to have him die in front of the church while the church burns.

Only later does Dave understands Jude’s last words, spoken in his native language. It’s the line that encapsulates Jude’s faith, “God is good all the time, and all the time God is good.” Striving for this simple faith will be Dave’s journey.

The primary subplot involves Keaton. We see her earlier that day, and she’s struggling with her faith. She’s talking, but God isn’t responding. Her boyfriend Adam has happily moved beyond Christianity, and the faith thing has become a problem in their relationship. She wants some distance from Adam to figure things out, and we see her going to the youth group in Dave’s church.

To Adam, the church is breaking up his relationship, and we discover that he was the brick thrower.

But Dave won’t go away quietly. He drives from the university in Arkansas to Chicago to visit his brother Pearce, a social justice lawyer. Though they’ve been estranged, Pearce drops everything and returns with Dave to help save the church. It turns out that their father had been the pastor of St. James church before Dave, and Christianity has caused friction in the family for years.

So, we have Pearce the atheist helping Dave keep his church. This would’ve been a great chance to emphasize Pearce fighting for what’s right regardless of his religious beliefs, how separation of church and state helps everyone, how the ACLU fights predominantly for Christians’ rights, and so on, but I guess that isn’t what a Christian audience wants to hear.

Adam realizes that his vandalism caused not only the destruction of the church but Jude’s death, and he’s consumed with guilt. He confesses to Keaton and asks if God could forgive him. (Omigooness! Do you think Adam’s stony heart is turning toward God?? That would make Jude’s death totally worth it!)

Dave discovers a demolition crew at the church one Sunday morning. (Their primary tool is a bulldozer, probably not what you’d use to destroy a three-story brick building, but whatever.) Dave stalls them with an impromptu church service while Pearce quickly gets an injunction. Whew! They have three more weeks.

Since the beginning of the film, Dave has been delivering groceries to a soup kitchen run by Meg. They gradually become an item, and she takes on the Jude role. Dave becomes increasingly frustrated with the difficulties God (apparently) is throwing in his path, which contrasts with Meg’s simple, strong faith.

To change the public conversation in his favor, Dave gets himself interviewed on local TV and asks people to appeal to the university to change their decision. This works, but it becomes personal when Tom the president gets a brick through his window.

Dave gets an anonymous text saying that it was Adam who threw the brick through the church window. Though we all know that Adam’s act was simply vandalism, and he had no intention of destroying the church or killing Jude, Dave assaults Adam in public. Adam walks away in handcuffs, but Dave has blown his PR advantage, and the university knows it.

Angry Dave lashes out at Pearce, driving him away. Dave is pretty unsympathetic at this point. He returns to that one rock we can all get support from, Jesus as told in the gospels. [Pass the barf bag.]

Keaton is also stressed, feeling Jesus absent from her life. She tells Josh (the youth pastor) about her failing faith, and Josh replies with the film’s only apologetic-ish argument. He says that John the Baptist had been around Jesus, and yet his faith was tested. When in prison, John asked his disciples to visit Jesus to see if he was the One.

Whoops—that was a bad story to use. John baptized Jesus, and he heard God himself say that Jesus was his son. If John had reasonable doubts with that evidence, how can any Christian today, so far removed from the supposed events, believe any Christian claim? But a Christian film can always have faith in modern Christians’ ignorance of what the Bible actually says, I suppose.

Dave walks through the burned-out church and God finally speaks clearly to him: be a light in the darkness (which is the film’s subtitle). He visits Adam in jail, and Adam says that he sent the anonymous text. They hug it out after Dave gives him Jude’s Bible.

Things culminate in a nasty public confrontation at the church, with sign-carrying students separated into groups shouting for and against the church. Pastor Dave and president Tom are both there, and Dave speaks to the crowd. He says that the church isn’t worth the friction that the debate has created in the community. He drops his lawsuit and says that Tom has promised that the new student union to be built on the site will have a place for the youth group to meet (which is hardly a concession, since the youth group would be just one of dozens of student groups that would be entitled to meet there).

This public protest is bizarrely set at night, but the logic is clear when Meg hands out candles, and everyone becomes a light in the darkness.

Keaton is waiting for Adam when he’s released from jail. (Dave had been pushing for leniency, but that wouldn’t have been his call to make. Involuntary manslaughter is usually a felony with a prison sentence of 5–10 years. Ah, well—Hollywood.)

The film wraps up with Dave breaking ground on the new St. Jude’s church. Pearce phones congratulations to Dave, and we see on his desk his old Bible, which has a handwritten note from his parents. And Keaton feels that she hears Jesus again, so she (what else?) texts “God’s not dead” to her friends. To hit us over the head with the point, at the end of the film one of the Newsboys (the Christian group featured in each film) encouraged everyone to share that message on social media.

I stayed through the credits, looking without success for the entry “God (played by himself).” That surprised me, since he played such a large role in the film.

But then I remembered that he made absolutely no appearance in the film, just like in real life.

If there is no God, why do meteorites
always land in the center of craters?
Checkmate, athiests!
— commenter Greg G. 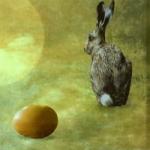 March 29, 2018
Easter Potpourri: A Look at the Crucifixion, Resurrection, and More
Next Post 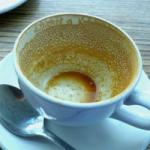