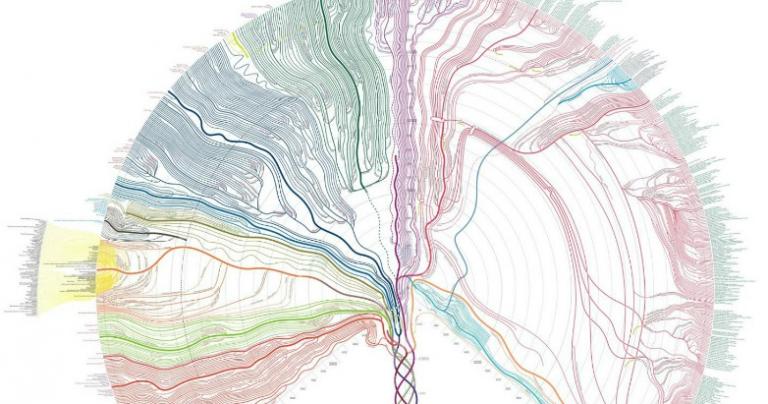 This colorful drawing is a tree of world religions. From a poorly understood past, represented as the twisting vines of ideology in the trunk, the myriad human interpretations of the divine are shown branching out like tendrils on a vine, groping for something to grab on to. Searching, ever searching, they never find, and yet new tendrils reach out with the continuous confidence that they are the one true religion.

The trunk expands into named religions 3000 years ago. Here’s one small fragment (the outer shell is the present day, with modern denominations named in green, and each curved gray ring line represents 100 years of evolution):

The tree details the evolution of the great Asian and Middle Eastern religions. Though it ignores religion from the Americas, Africa, and the Pacific, it makes a heroic attempt at what it does attempt to cover. It nicely documents the complex project that human religion has become.

Example 2: Church’s many views of government

Here again, we see the dramatic differences in the many variant forms of Christianity (in this case, American Christianity). For example,

Don’t forget the Map of World Religions (more here). Contrast the stable map of world religions (Roman Catholics in the red region over here, Hindus in green over there, and so on) with the map of world science, which is just one color. New and better ideas sweep the world of science within a decade or two, but an established religion isn’t interested in better ideas. It already thinks it has the truth and has no interest in changing.

See also: Religions Continue to Diverge—What Does that Tell Us?

Search for the truth

If religious claims were as obviously correct as the claim that the sun exists—that is, if they were firmly grounded in evidence—everyone would quickly agree. But that’s not the world we live in.

Alright then, suppose that religious truth does indeed exist, but it’s fuzzy or cloudy. We see, but as if “through a glass, darkly.” Why then aren’t worldwide religious beliefs at least converging on the truth? It would be like evolution, with false beliefs gradually falling away and correct beliefs encouraged and strengthened, either by divine intervention or because they matched up better with reality.

The tree of world religions above makes clear that religion is doing the opposite—diverging instead of converging. Christianity has fragmented and morphed over time as new cults and sects form. We see that same fertility in other religions. The only commonality we see across religions is humans’ interest in the supernatural.

This disconnect between religion and the reality that would ground it shows that religion is just a man-made institution. The past, illuminated by this tree, makes clear that religious guesses will continue to diverge. The quest is constant, though the goal is nonexistent.

If God exists, why do we need books to explain it?
Or preachers?
The fact that he can’t do it himself
is good evidence he does not exist
— Dan Barker 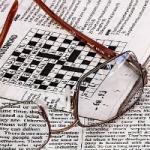