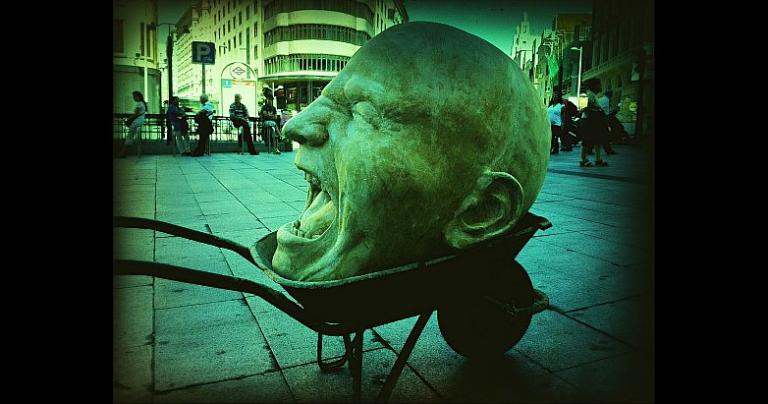 Let’s wrap up our exploration of stupid arguments Christians would do well to avoid (Part 1 here).

“There is no basis in atheism for morality. A consistent atheist would admit that the holocaust was not evil based on atheism. All that he can say is that stuff happens” (from commenter Al).

No basis in atheism for morality? There’s also none in chemistry, but so what? Atheism doesn’t propose to define or explain morality; it is simply the lack of god belief (or some close variant). That’s it. If you’re looking for a formalized approach to secular morality, consider the Humanist Manifesto or the Universal Declaration of Human Rights.

Seriously, Christians, avoid this one. It invites a critique of your own worldview which, unlike atheism, does claim to provide moral guidelines. And they suck. With a God that commands genocide and condones slavery, your morality lives in a glass house.

You must just hate God. Or you’re an atheist because you are too proud to bend the knee. Or because you had a bad father. Or you don’t want to give up your hedonistic lifestyle. Or you had a bad experience with a religious person.

“You really believe in God, you just hate him” was the laughable punch line in the move God’s Not Dead. The mean professor, when a child, pleaded with God to not take away his mother, but she died anyway. (My review here.) Someone who believes in God is not an atheist. And not me.

Some Christians seem determined to begin with “all men are without excuse” from Romans 1:20. If there is no excuse, then atheists’ arguments must somehow be invalid, and they must actually be believers who willfully reject the truth.

Here’s another angle on this idea that atheists are actually believers. From a pastor (quoted by Friendly Atheist):

How many atheists do you know that want to fuss and fight with you about trolls, and about Smurfs, and about fairies? None of them. They all want to fight about God. Why? Because you don’t fight stuff that’s non-existent. You fight stuff, that, in your conscience, you know is existing.

We push back against Christians because Christianity (at least conservative U.S. Christianity) is the bull in society’s china shop. Christianity supports hateful social policy and attacks the separation of church and state that protects both Christians and atheists.

“Life is . . . like a ray that starts with a point called birth and extends on into eternity. . . . That gives you a very different perspective on suffering, on evil, on anything bad that might happen to you in your life. . . . Any period of suffering . . . becomes smaller and smaller relative to eternity [as you proceed along the ray of life—it becomes] a quick, brief instant.” (from Christian podcaster J. Warner Wallace)

Any injustice you might experience in the world? Just shake it off because we should compare it relative to the all-you-can-eat buffet and bottomless coffee that is heaven. (And you thought Christians didn’t view moral arguments from a relativistic standpoint!)

The Bible puts it this way: “I consider that our present sufferings are not worth comparing with the glory that will be revealed in us” (Romans 8:18). This is analogous to punching someone and then giving them a million dollars in compensation. Yes, you’ve given compensation, but that doesn’t justify the injury! In the same way, “God compensates for the injustice in your life” doesn’t get God off the hook, since he still caused that suffering.

Rationalization has its place. If you have conflicting claims X and Y and you are certain that X is true, it makes sense to assume that Y fits in somehow. The problem is when X (for example, “God exists”) is assumed true with insufficient evidence.

C.S. Lewis’s rationalization for the Problem of Evil was, “Pain is God’s megaphone to rouse a deaf world.” He can’t imagine a bungling god and he can’t imagine no god, so somehow evil must be there for a good reason. Here again we have the Hypothetical God Fallacy where God is presupposed so that we can imagine that omniscient God must have good reasons for things we just don’t understand.

The Bible itself has these rationalizations. Remember when Jesus predicted the imminent end? Rationalization becomes damage control when it doesn’t happen on schedule.

The Lord is not slow in keeping his promise, as some understand slowness. Instead he is patient with you, not wanting anyone to perish, but everyone to come to repentance (2 Peter 3:3–8).

So Jesus was wrong by 2000 years and counting? Well, yeah . . . but . . . but that must’ve been part of the Plan® all along. Yeah—that’s what it was! All along, God wanted to bring as many believers as possible to the Kingdom, so he’s just delaying the inevitable. So rationalize a catastrophe by assuming God’s plan is right on course.

Or take the embarrassing conquest of first Israel and then Judah. What happened to Yahweh’s protection? Was he weaker than the gods of the other countries? Well, you have to understand that Yahweh was just using the Assyrians and Babylonians to teach God’s people a lesson (Ezekiel 36:19, for example). Yep, he was in charge all along. No other option is conceivable.

Stupid Argument #25b: God as the unfalsifiable hypothesis.

“Should a conflict arise between the witness of the Holy Spirit to the fundamental truth of the Christian faith and beliefs based on argument and evidence, then it is the former which must take precedence over the latter” (Christian apologist William Lane Craig).

Christians, get out of the echo chamber. These arguments sound good only before they’re tried out in the real world. Arming yourself with these arguments is like walking the Hollywood set of a Western town—everything is pretend.

But the good news is that now that we’ve gotten these bad arguments out in the open, no Christians reading this will use these useless and embarrassing arguments, right? Surely, that’s the last we’ll see of them.

The chains men bear they forged themselves.
Strike off their chains and they will weep for their lost security.
— John Passmore

August 10, 2018 When Christianity Was in Charge, This Is What We Got
Recent Comments
580 Comments | Leave a Comment
"Here is one of Paul's claims.Galatians 5:14 (NRSV)14 For the whole law is summed up ..."
Greg G. Soft Theism: Afterlife and Homeopathic Religion
"Yes, I (and most of the world) have an itch for God. The fact that ..."
Michael Murray Soft Theism: the Strongest Argument for ..."
"As an atheist I find the stories to explain why god allows suffering seem to ..."
WayneMan Soft Theism: the Strongest Argument for ..."
"He knew little more than what the typical non-Jesus cultist knew. He wasn't privy to ..."
Greg G. Soft Theism: Afterlife and Homeopathic Religion
Browse Our Archives
get the latest from
Cross Examined
Sign up for our newsletter
POPULAR AT PATHEOS Nonreligious
1