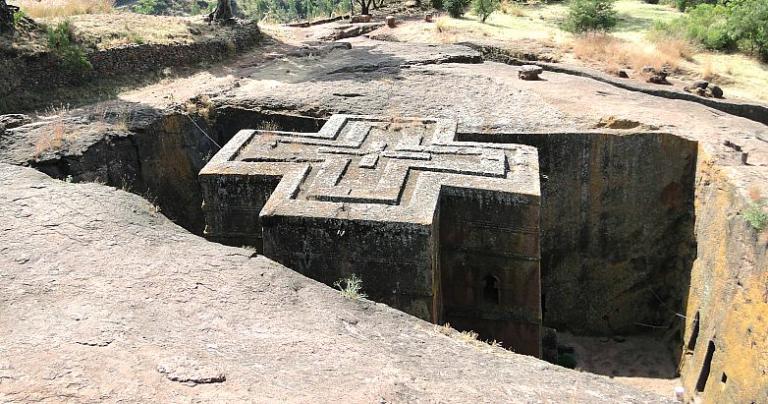 An article in Pakistan Today recently attacked nine atheist arguments. Though they probably came from a Muslim perspective, I responded with rebuttals as if these were Christian arguments (part 1 here). Let’s finish up.

“5. Free will and belief in God are incompatible.”

Nobody can believe in responsibility and culpability of humans, and at the same time believe in an omniscient God. If God already knows what one is going to do, how is one free to do anything to change the future (which is already known to God)? Either we are automatons or are responsible for our actions; and the latter rules God out.

Nicely stated! I leave free will arguments alone, knowing only enough to realize that it’s a big, contentious topic about which I have nothing interesting to say. But that’s not really where the author is going:

The error in this form of argumentation is that it places God inside the framework of time. According to any sophisticated theistic concept . . .

Whoa—stop there. Any sophisticated theistic concept? What does that mean? Confusing? Complicated? And how is “sophisticated” measured? A claim about reality should be measurable by how well it fits with the evidence, but somehow I think that evidence isn’t what the author wants to use here.

Perhaps “sophisticated” means thoughtful. I’ve read countless apologetic arguments that claim to be thoughtful but turn out to be some witches’ brew of confirmation bias, ad hoc thinking, rationalization, cherry picking of evidence, and cognitive dissonance. Just because someone is smart and able to defend nonsense doesn’t mean that what they say is correct (for examples we can all agree on, look to apologists from any foreign religion). Give William Lane Craig a year to build a case for the flat earth hypothesis, and he’d have as compelling a case as the one he uses for Christianity.

And I can’t ignore the slightly tangential Courtier’s Reply. This fallacy imagines one of the emperor’s courtiers responding to those rubes who declared that the emperor was newly unclothed, but it then maps this situation onto Christian defenders annoyed at Richard Dawkins because of his book The God Delusion. The Reply ends: “Until Dawkins has trained in the shops of Paris and Milan, until he has learned to tell the difference between a ruffled flounce and a puffy pantaloon, we should all pretend he has not spoken out against the Emperor’s taste.”

In the same way, too many apologists try to shield poor, defenseless God from critique by inventing ever more roadblocks for atheists to get around. “You haven’t responded to McConnell’s Inverted Counterclockwise Gluten-Free argument for god,” they’ll say. “I can recommend a couple of books that cover that one thoroughly. And if you get past that one, which I doubt, I’ve got plenty more.”

The author isn’t making that argument, but I do get a sense of “you’re disqualified from offering an argument until you have far more theological training” when I read that only “sophisticated theistic concepts” need apply.

According to any sophisticated theistic concept, God is independent of time, and therefore it’s meaningless to apply words such as ‘future’ or ‘already’ to God.

Be careful: a god outside time is frozen and inert. Only with time can God judge, decide, take pleasure in things, and so on—all actions that the typical Christian apologist says God does. What does “God is independent of time” mean? Is that like being a time traveler? Or is it that he’s above time? But how can he be above time without being outside time and therefore inert?

All this science fiction needs to be justified. Apologists try to say something profound, but then they expect a pass so they needn’t justify their exuberant claims.

“6. Where’s the proof for the existence of God?”

Just to be clear, I don’t ask for proof, just for compelling evidence that God is better than any other explanation.

What would be so special about a god who existed like everything else?

So if your claims about God’s existence were easily tested, that would defeat the purpose? Nope—you make a claim, and then I see if I can verify it. That’s how it works with everything else, and that’s how it must work with this, the claim that you say is the most important of all. That’s certainly what you’d demand from an evangelist from another religion.

You claim God exists? Okay, I’m listening, but don’t expect any special accommodation. I demand at least as much evidence as you’d demand from a foreign religion.

God is Absolute (the most Basic) and is the reason for all existence. He is not a theorem that can be proved by starting from more basic assumptions.

So God is both hidden and eager for us to know him? You may want to recheck that.

It’s easy to make this claim—that everything relies on God—but I need evidence. Show us, for example, that since everything including our familiar logic rests on God, a godless universe would have different logical axioms.

This is text-book ad-hominem. This is like rejecting relativity on ‘grounds’ that Einstein abandoned his daughter. How a person behaves has no bearing on the validity (or otherwise) of his belief systems.

You underestimate the New Testament, which makes clear that someone sins if and only if they are not “born of God”: “No one who lives in him keeps on sinning. No one who continues to sin has either seen him or known him. . . . No one who is born of God will continue to sin, because God’s seed remains in them; they cannot go on sinning, because they have been born of God” (1 John 3:5–9).

No, it’s not an ad hominem fallacy; it’s yet another example of putting the Bible’s claims to the test and seeing them go down in flames.

Sometimes it does. But, so does soccer.

Not enough reason to cast aside either.

I’m interested in whether God exists, and strife is irrelevant. This is the negative side of popular Christian arguments like “Christians have less divorce” or “Christians are more generous.” Christians in the U.S. actually don’t show all that well in comparisons like this (studies show that they have more divorce than average and are no more generous than average), but that’s not my point. I’m happy to concede that if you pick the right subset (American Christians or worldwide Christians or fundamentalists or Baptists or whatever), you’ll find some areas where they have more of some positive trait.

All this is irrelevant to the interesting question, “Does God exist?”

Dang! Now I’ll have to return to wearing my baseball cap backwards to prove I’m cool. More to the point, I’m surprised to hear that “atheism is cool” was ever a thing in Pakistan, where atheism is punishable by death.

As for no longer being rare, that’s correct. The Rise of the Nones is one of the biggest news stories of American Christianity in the twenty-first century. “No religion” as a belief category was steady in the U.S. through the seventies and eighties but then began to climb. It went from 6% in 1990 to 20% in 2012 and continues to climb.

Here’s a projection of that trend into the future. 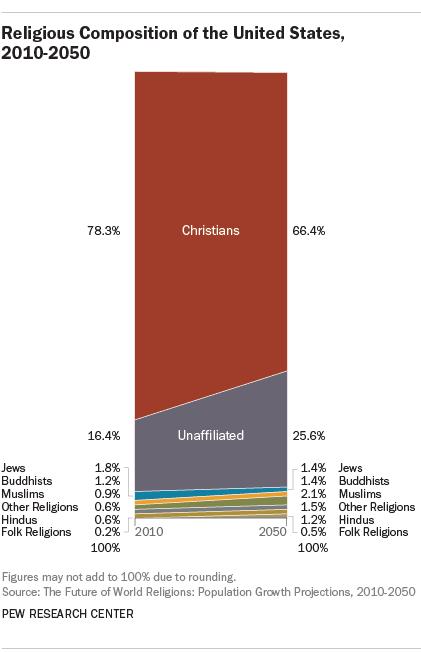 The rise of the Nones (my religion is “none of the above”) is a big story, whether atheism is cool or not. But here again, this is irrelevant to the truth of theistic claims. Atheism isn’t a fashion statement or an act of youthful rebellion. Rather, I see theism’s fundamental claims being challenged with increasing boldness, and the statistics report a steady decline, first in western Europe, now in the U.S., and perhaps later in the rest of the world.

Acknowledgement: this article was brought to my attention by thoughtful commenter ThaneOfDrones.

Truly I tell you,
if you have faith as small as a mustard seed,
you can say to this mountain goalpost,
“Move from here to there,” and it will move.
Nothing will be impossible for you.
— a tweak on Matthew 17:20
from commenter Lark62

August 13, 2018
Response to “Nine Not-so-Good Reasons To Be an Atheist”
Next Post 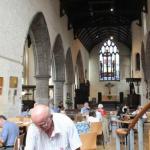