When Christianity Was in Charge, This Is What We Got

When Christianity Was in Charge, This Is What We Got August 10, 2018 Bob Seidensticker 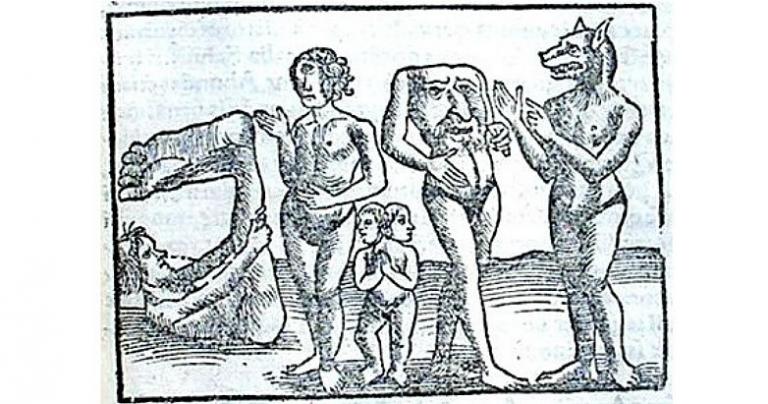 In 2014, I visited Hereford Cathedral in England and saw their mappa mundi (chart of the world). About 100 standalone mappae mundi remain, and this is the largest. It was made from a single calf skin, it’s a little over five feet tall, and it was made around 1300.

This is not the kind of map we’re used to. There is little attempt at accurate geography. This map wouldn’t serve an explorer or navigator, and its creators didn’t pretend that it would.

Using the theme of a world map, medieval cartographers embellished maps like this one to make them into something of an encyclopedia. Science was in its infancy, however, and the information was often bizarre.

Do you remember the “Jabberwocky” from Through the Looking-Glass? It begins:

’Twas brillig, and the slithy toves
Did gyre and gimble in the wabe.

Assuming our interest is the real world rather than Wonderland, the zoology we’re taught by the Mappa Mundi might as well have come from Humpty Dumpty. The drawing above shows monstrous people from Sebastian Münster’s Cosmographia (1544), and the Hereford Mappa Mundi includes some of these and more.

The map also shows a number of mythical creatures, including a griffin and a salamander with wings. My favorite is the bonnacon, shown looking back over its shoulder at its own explosion of scalding diarrhea, which covers three acres. Even actual animals are misunderstood. The map reports, “The Lynx sees through walls and urinates a black stone.”

As with all mappae mundi, this one puts Jerusalem in the center. It locates places of important biblical events such as the Tower of Babel, the Garden of Eden, the route of the Exodus, and Sodom and Gomorrah.

Mythology and history are mixed without distinction. We see Jason’s Golden Fleece and the Labyrinth where Theseus killed the Minotaur, but we also see the camp of Alexander the Great.

Christianity was in charge for a millennium, and all I got was this lousy map

Christianity has been given a chance at understanding reality, and this is what it gave us. When Christianity was in charge, the world was populated by mystical creatures, we had little besides superstition to explain the caprices of nature, and natural disasters were signs of God’s anger.

Christianity’s goal isn’t to create the internet, GPS, airplanes, or antibiotics. It isn’t to improve life with warm clothes or safe water. It isn’t to eliminate diseases like smallpox or polio. It’s to convince people to believe in a story that has no evidence.

Admittedly, it’s not like Europeans had a lot of options. Christianity was the opium of the masses—better than nothing and not exceeded by much of anything in the Europe of 1300. True, eyeglasses had recently been invented and a remarkable century of cathedral building had passed, but science didn’t yet offer much of an alternative way of seeing reality.

Today, we have had a couple of centuries to give modern science a test drive, and we know that it delivers. Nevertheless, we still see Mappa Mundi thinking today. There are still religious leaders who long for the good old days of 1300.

The chief purpose of life is not happiness, but the knowledge of God.
— William Lane Craig

“Q. What is the chief end of man?”
“A. Man’s chief end is to glorify God, and to enjoy him forever.”
— the first question in the Westminster Shorter Catechism (written in 1647 but in use today)

According to the Bible, our purpose—the reason we are here—is for God’s glory. In other words, our purpose is to praise God, worship him, to proclaim his greatness, and to accomplish his will. This is what glorifies him.
— Matt Slick, CARM

There is no calling greater than praising God. This is true not only for us, but surprisingly also for God himself, he being the greatest, to glory in anything else would be idolatry. Therefore, if the greatest thing God can do is give himself glory, and no created thing can be greater than God, the greatest thing we can do (our purpose, you might say) is to glory him.
— John Piper, Desiring God

And Christians say that it’s the atheists who lead pointless lives!

It’s the twenty-first century, and yet the guiding principles for Christians’ lives come from the fourteenth, back when the sun orbited the earth, disease had supernatural causes, and the world was populated by Sciapods, Blemmyes, and bonnacons.

So geographers, in Afric maps
With savage pictures fill their gaps
And o’er uninhabitable downs
Place elephants for want of towns.
— Jonathan Swift (1733)

August 13, 2018 Response to “Nine Not-so-Good Reasons To Be an Atheist”
Recent Comments
3,214 Comments | Leave a Comment
Browse Our Archives
get the latest updates from
Cross Examined
and the Patheos
Nonreligious
Channel
POPULAR AT PATHEOS Nonreligious
1