Prove that God Exists with a Public Test 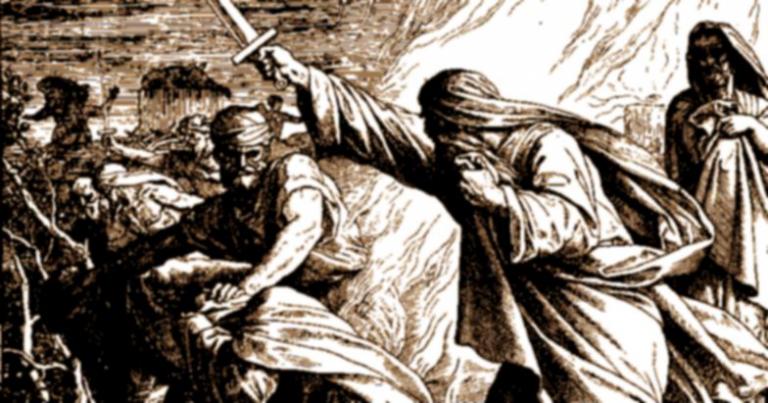 Perhaps you’ve read Jesus saying, “Do not put the Lord your God to the test” (Matthew 4:7). Forget that—God is happy to be tested.

The prophet Elijah from the 9th century BCE organized a public competition between his god Yahweh and Baal (1 Kings 18:16–40). On Baal’s side were the hundreds of his prophets, and on Yahweh’s side was only Elijah, Yahweh’s last prophet. The test was to see which side could get his god to light a sacrificial fire, and all of Israel was summoned to watch.

The priests of Baal called on their god all day with no effect. Elijah taunted them, suggesting that maybe Baal was deep in thought or out for a moment or sleeping.

When it was Elijah’s turn, he made the demonstration more difficult by having his sacrifice and the wood underneath soaked in water. He then called on Yahweh, and fire from the sky consumed the sacrifice, wood, water and even the stones of the altar.

Don’t you miss those days, when God would make clear that he existed with an awesome demonstration of power? God may be kinda cute as the shy nerd whose action in the world today looks just like no action at all and whose religion looks like an ancient superstition that evolved into a crazy-powerful global empire, but don’t you want a demonstration to show that he actually exists? Wouldn’t you like to resolve those doubts for good?

A new test for Yahweh

No one today demands a Yahweh vs. Baal contest because those who thought that Baal was real have died out. But what about Yahweh vs. science? Science does exist, and positive results from science and technology pop up daily to embarrass Yahweh. True, science isn’t omniscient, though it does get a lot right. Our modern technology-rich society admits to science’s power: it was science that eliminated smallpox, produced anesthesia, and created the airplane, internet, and GPS. Science makes life safer, healthier, more comfortable, and more interesting.

In response, we’ve learned nothing new about the world from Yahweh. We get nothing but handwaving. Christians’ use of technology should taunt them, since it makes clear how their lives have been improved by science, not by revelations from Yahweh. It’s almost like society takes far better care of people than Yahweh does. Superstition and supernatural belief were what people had before science, but now we have something much better. Yahweh should’ve gone the way of Baal, since he has nothing to point to in the making-life-better department.

If Yahweh worship were a custom, just a thing people do to give them comfort or a sense of community, that would be fine—it’s easy to see that Christianity delivers that. But Christianity goes far beyond this, and its bold claims are measurable. For example:

The Lord will keep you from all harm—he will watch over your life (Psalm 121:7).

The righteous cry out, and the Lord hears them; he delivers them from all their troubles (Psalm 34:17).

Inspired by Elijah, I propose a test of Yahweh vs. science. And I know the perfect loudmouth to be Yahweh’s advocate: Pat Robertson. Pat is fresh off his victory of rebuking hurricane Florence, demanding that it steer away from his home in Virginia Beach, Virginia. He demanded, “Hurricane Florence, we speak to you and we command the storm to cease its forward motion and go harmlessly into the Atlantic. Go up north away from land and veer off, in the name of Jesus.”

It didn’t go “up north away from land” but hit the U.S. coast in North Carolina, eventually causing 45 deaths and $38 billion in damage, but that didn’t stop Pat from taking credit. His university campus and holy satellite ministry are okay, and that (apparently) is all he cares about. He said about this hurricane, which was never expected to directly hit Virginia Beach anyway, “This is a miracle ladies and gentlemen. . . . When we pray, God does miracles.”

I would’ve judged Pat’s prayer experiment as a complete failure. Wouldn’t a miracle be more like the hurricane poofing out of existence? But no matter. If Pat is convinced that God listens to him and does public miracles, then Pat is our man.

Pat Robertson, I challenge you to a contest, a public Elijah-vs.-the-priests-of-Baal type contest. I’m open to the specifics. For example, we could look forward. The resolution of open scientific questions could be the prize, something like this: “Attention, scientists and priests! The first group to explain where life on earth came from, with evidence to back it up, wins!” Or maybe explain why there was a Big Bang or why we dream or what the universe is made of.

Hilariously, many Christian apologists will say that they’ve already answered some of these. They have answers to where life and the universe came from—God did it. The problem is, of course, that they have no evidence. They’re simply saying that they can reshape the clay of their religion to be compatible (more or less) with what science says, which counts for nothing.

Practical problems are another class of forward-looking challenges. The contest could be a race to demonstrate how to make a room-temperature superconductor, how to get electricity from fusion, or how to eliminating cancer.

The fact that these questions themselves came from science, not Christianity, emphasizes what an underdog Christianity would be in this contest. But a guy who actually thinks that he disciplined a hurricane that later killed dozens and caused tens of billions of dollars in damage might be just the one to think that he can demonstrate God’s power in the domain of science.

How about it, Pat? You’re quick to look for a chance to publicly demonstrate God’s power. Are you ready for the big leagues?

Oh, and I’m eager to hear what stakes you propose for the winner. Remember that, in the original Bible story, every priest in the losing worldview was killed.

All we did was claim to speak for God
and suddenly we’re held to a higher standard?
— SMBC’s interpretation of priests’ response
to Catholic child sex abuse scandal

September 21, 2018
The Backfire Effect: When Accurate Information Is a Mistake
Next Post