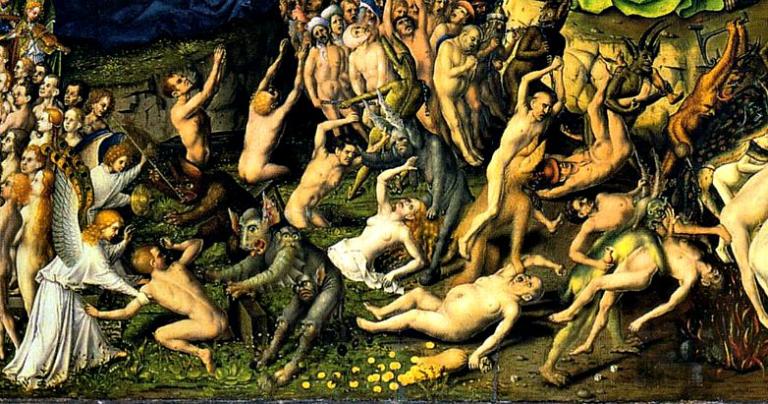 We’re looking at popular arguments against same-sex marriage (and a few that are just anti-gay). Conservative radio host Frank Turek provides most of the arguments. (Part 1 here.)

Rights are not based on human opinion, but on an unchangeable authoritative standard beyond human opinion. That’s why human rights cannot exist unless God exists. Without God everything is simply a matter of personal preference. . . . Human laws can only recognize God-given rights.

Frank needs to study up on how human rights come about. To take one example, voting rights have changed over time in the U.S., and God didn’t play a role at any stage.

But let’s go there anyway and see what the Bible says. The Bible doesn’t directly address same-sex marriage. It does, however, make clear its disapproval of mixed-race (or intertribal) marriage. Here’s a modern rejection of interracial marriage from Bob Jones University built on an honest reading of the Bible.

Although there is no verse in the Bible that dogmatically says that races should not intermarry, the whole plan of God as He has dealt with the races down through the ages indicates that interracial marriage is not best for man. (1998)

The statement is unnecessarily hesitant. God plainly forbids intermarriage with foreign tribes (Deuteronomy 7:3). The prohibition against intermarriage is also given in Ezra (9:2, 10:10) and Nehemiah (chapter 13). King Solomon was also chastised for his foreign wives (1 Kings 11).

The apologist might respond that the prohibitions against intermarriage were meant to avoid temptations to worship other gods. That’s true to some extent but irrelevant—they’re still anti-miscegeny laws. If they’re wrong today, why excuse them back then? The Bible’s version of “God-given” rights and demands isn’t a morality than we can tolerate.

To understand the Bible on homosexuality, consider its stance on slavery. Some Christians say that slavery in the Old Testament was just God adapting to the imperfect, wicked customs of the time. All right, but take the same approach toward homosexuality. If God’s attitude toward slavery was adapted to the times (though that attitude makes no sense today), then maybe God’s attitude toward homosexuality was similarly adapted to the times and makes no sense today. These Christians might respond that the Old Testament was wrong on slavery but right on homosexuality, but what—besides personal opinion or preference—would they base that on?

The Bible gives no support to Frank’s “marriage = babies” argument (argument #5 in our critique). One kind of marriage we do see, however, is the marriage of Jesus to the church (as in Ephesians 5:25–27). In this marriage, it’s love that is central, not babies.

Paul is no asset to the Christian position either. He said, “It is good for a man not to have sexual relations with a woman” (1 Corinthians 7:1). This applied to married couples as well (1 Cor. 7:12)—so much for the celebrated role of procreation. He discouraged marriage (7:8–9) and rejected divorce (7:10–11). Marriage wasn’t even a Christian sacrament in the Church until the Fourth Lateran Council of 1215. I’m not surprised that Frank hides from this part of the Bible since it defeats his position.

10. Because morals come from the Creator!

Forget about the “separation of church and state” objection. It doesn’t apply here. . . . [The founders] recognized our moral rights come from the Creator and founded the country on “Nature’s Law” consistent with Christianity.

Since the Constitution is explicitly secular, history revisionists like to go back to references to a “Creator” and “Nature’s Law” in the Declaration of Independence. The DoI is an important historical document, but that’s it. These references impose nothing on American society today, and they’re not even Christian references but are deist.

The DoI makes clear that “Governments [derive] their just powers from the consent of the governed,” not God. And when a government becomes abusive, “it is the Right of the People to alter or to abolish it, and to institute new Government.” The government answers to the people, not God. Frank can’t find much support in this argument. More here.

11. My standard can beat your standard!

Frank next appeals to objective morality. You gotta have an objectively correct moral stance to make any moral claim, Frank tells us, and such a stance admits a god to ground it.

Homosexual activists say we’re wrong. But we can’t be “wrong” unless there is a real standard of “Right” from which we deviate.

Frank adds qualifiers—a real standard or something being truly right—to refer to objective morality, but I doubt that such a thing exists. I impatiently await evidence that there are moral truths that would be true whether anyone believed them or not (explored more here, here, and here).

It’s like Frank isn’t aware of how social change works. You have a moral belief because you’ve concluded that it’s correct. You can then explore the why, but in the end the buck stops with you. It is your opinion.

That may not be much, but it’s all we’ve got. Groundless handwaving that God agrees with you counts for nothing.

I don’t claim that my conclusions are objectively true, and your claims to be able to tap into objective moral truth are backed up by nothing more than wishful thinking. I agree that God doesn’t affirm same-sex marriage, but God does affirm polygamy. You still want to model marriage after what God says?

Little Girl: “I’m so glad I don’t like asparagus.”
Friend: “Why, my dear?”
Little Girl: “Because if I did like it,
I should have to eat it, and I can’t bear it!”
— moral difficulty proposed by Lewis Carroll