The Argument from Mathematics Doesn’t Add Up to God (2 of 2) January 19, 2019 Bob Seidensticker 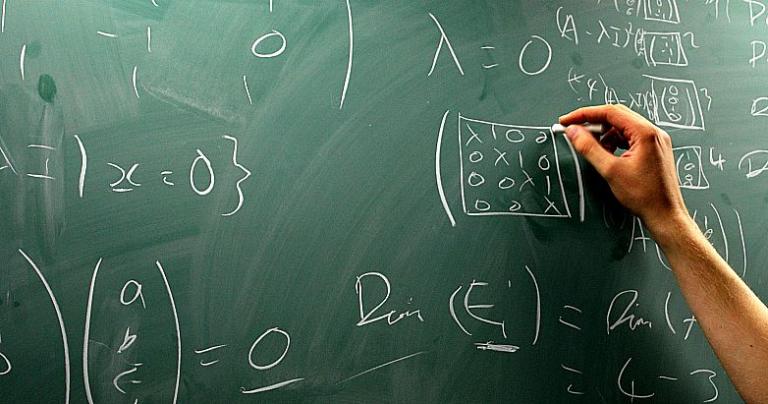 A Christian apologist with a new argument is like a kid with a new toy. William Lane Craig is excited to show us the Argument from Mathematics (part 1 of the discussion here). He marvels at what he calls “the uncanny effectiveness of mathematics” in describing the world around us. Unsurprisingly, he’s quick to push forward his favorite deity as the explanation.

So how effective is math? It’s fundamental in physics, but it doesn’t do much for other fields like literature. Or art. Or history, geology, sociology, politics, human relations, or lots of other fields. Impressive attempts have been made to find mathematics to model human behavior—catastrophe theory, for example—with little success. Compared to the scope of human endeavors, math is actually quite limited.

Consider where math does its impressive work, the intersection of Math and the Physical World. 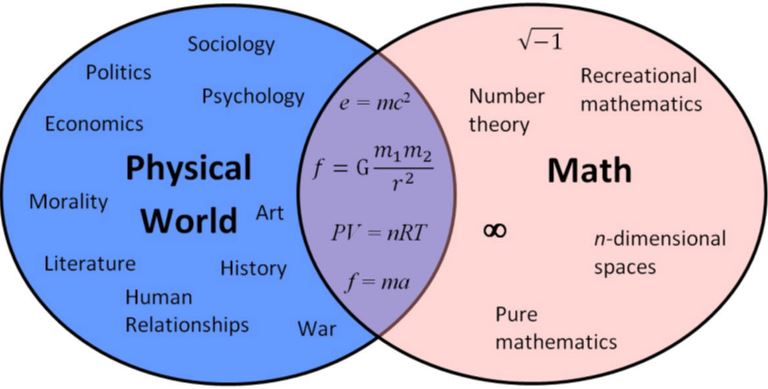 Another bump in the road to math’s “uncanny effectiveness” are Gödel’s incompleteness theorems, which argue that finding a complete and consistent set of axioms for all mathematics is impossible.

And consider whether God or reality calls the shots. Take just one primitive truth in our reality, 2 + 2 = 4. Could God have made it anything different? If so, we await the evidence. If not, what role is left for God if reality defines the fundamentals from which the rest of math follows? God is sidelined without much to do.

Craig’s antagonist in this discussion, Dr. Daniel Came, raised many of the points I’ve mentioned here. About math’s applicability, he said,

If you think of the number of possible questions that human beings can ask, the number that are actually tractable with science and mathematics is a vanishingly small percentage.

Craig claims that “God did it” is an inference to the best explanation. He wants the teacher to declare that time is up because he has an answer. Problem is, it’s not much of an answer.

He doesn’t care that the consequences of his explanation are either untestable (such as the existence of an afterlife) or have been tested and failed (such as answered prayer).

He doesn’t care that his claim isn’t even falsifiable.

He doesn’t care that “God did it” raises more questions than it answers—questions about who or what God is, his motivations, how and why he created the universe, and so on. “God did it” is no explanation at all.

He doesn’t care that whenever science has found an explanation, it’s always natural. Science has accepted zero supernatural explanations.

He doesn’t care that, when you look around at God’s project with its natural disasters, parasites, childhood illnesses, and so on, it looks more like an experiment of the kid who burned ants with a magnifying glass, inexplicably given omnipotence, than the design of an all-loving deity.

He doesn’t provide evidence that his god even exists.

No, Craig says, his answer has great explanatory power, “unless you’re closed to theism.” (Did you see that clever role reversal coming? If there’s a problem with embracing Craig’s position, it must be that the atheist is simply closed-minded!)

We see cracks begin to form, however, when he admits that his isn’t an empirical explanation but rather a metaphysical one. But then what good is it—I mean, besides advancing Craig’s pet theory?

Craig says that simple math would always apply to the physical world in any universe. That sounds plausible to me, but Craig is overconfident as usual as he tosses out claims about which he couldn’t possibly have definite knowledge. And if Craig admits that God isn’t needed for simple math, how can you exclude the rest when complex math is built on simple math? As an example of “simple math,” Craig includes the Bridges of Königsberg problem, which was the beginning of graph theory.

Craig demands an explanation because that’s where he imagines his advantage lies. He’s got an explanation, pathetic though it is, which is more than the other side has.

The problem, of course, is that “we don’t have an answer” is a perfectly reasonable response from the side of reason and science. The last ten thousand puzzles that science resolved started from that position of honest ignorance. Every Christian explanation of “God did it!” for these puzzles was wrong, and yet here Craig pops up again like a Weeble with the same childish and simple-minded proposition. “Well, how about now? Is God an explanation now?”

Christianity assures its flock that it’s doing important work as it pretends to answer science’s unresolved questions with the same mindless, one-size-fits-all answer, but this is just god-of-the-gaps reasoning. (In my list of 25 stupid arguments Christians should avoid, this is #20a: Science can’t explain everything; therefore, God.)

Craig reminds me of Teen Talk Barbie, a doll from 1992 that could say a number of phrases, including one that has been paraphrased as “Math is hard!” Craig seems to confuse difficult math (and there’s plenty of that) with math that depends on God, and his argument seems to devolve into little more than Barbie’s observation.

Yes, math is hard, but both Barbie and Craig have yet to show that mathematical explanations of the real world would fail in a godless universe. They seem to even be unaware of the problem.

The good Christian should beware of mathematicians
and all those who make empty prophecies.
The danger already exists that mathematicians
have made a covenant with the devil
to darken the spirit and confine man in the bonds of Hell.
— Augustine

January 17, 2019
Christian Historical Claims Are Surprisingly Fragile: a Case Study (2 of 2)
Next Post

January 22, 2019 The Modal Ontological Argument? It Needs a Good Thrashing.
Recent Comments
308 Comments | Leave a Comment
"There you go again. You produced a list that you believe applies to mythicists and/or ..."
Ignorant Amos When Christians Treat God Like a ..."
"I second Susan's appeal.Not only is he here spreading bile, but he is also over ..."
epeeist How Useful is the Bacterial Flagellum ..."
"Ed Brayton on Dispatches from the Culture Wars announced that he is signing in to ..."
epeeist A Simple Thought Experiment Defeats Claim ..."
"You might find the Tippling Philosopher more interesting, at least once you block the neo-Nazis, ..."
Susan A Simple Thought Experiment Defeats Claim ..."
Browse Our Archives
get the latest from
Cross Examined
Sign up for our newsletter
POPULAR AT PATHEOS Nonreligious
1