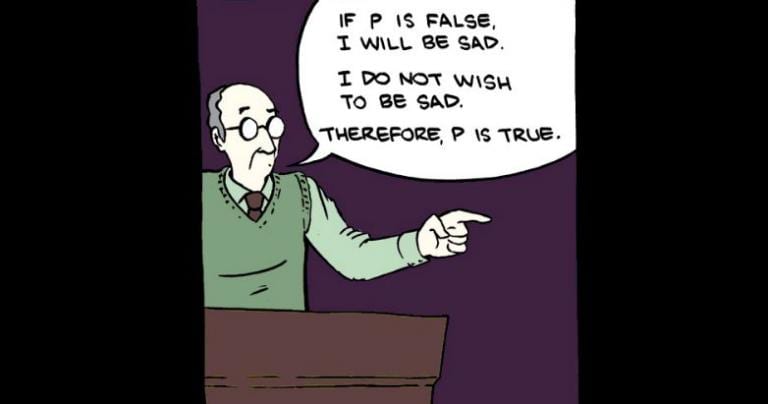 Doesn’t time fly? It seems like forever since we checked in with our favorite sitcom, “Christians say the silliest things,” our list of stupid arguments Christians would do well to avoid.

We’ve blown past our initial goal of 25 arguments and are now at argument #46. If you want to start at the beginning, that’s here.

Stupid Argument #46: “God is like a father” and similar comparisons

We don’t see supernatural beings in daily life, so Christian apologists try to compare God to things we do see. In this blog, we’ve seen claims that God is like a father who gets angry when we make mistakes (here and here). God is like a child or an artist who deserves praise (here). Or maybe God is like a romantic partner (here).

Whenever I read such a comparison, I feel like a cat chasing paper tied to a string. As soon as I grab for the analogy to make sense of it, the apologist jerks it away and tells me that it’s not a perfect analogy.

No, it’s not a perfect analogy. It’s not even a good analogy. These comparisons fail because the most boring thing about the person God is compared to (he’s like a spouse, like a father, like a judge) is that that person exists.

This argument sounds like this: “Don’t be a wimp! You’re smart enough to weigh the evidence for evolution [or climate change or vaccinations or the Big Bang or some other scientific issue]. You don’t need scientists—figure this out yourself.”

An example of this is a long, fruitless discussion I had with Dr. Jay Wile about evolution here. He’s a scientist (nuclear chemistry), but he’s not a biologist. He can speak with authority in his field, but that’s no warrant to correct errors in other scientific fields. Nevertheless, he dumped on me his version of the Appeal to Ego:

Golly—my options apparently are to be an indolent puppet in the hands of my betters, or to stand like a man and decide for myself.

Or maybe there’s a third option: that sciences like biology are very specialized fields that I will always be an outsider to, and, as a result, I am obliged to accept science’s consensus view (where it exists) as the best approximation to the truth. That doesn’t mean that the consensus is necessarily right, just that it’s the layperson’s best bet.

That this is simply a desire for a more pleasing reality rather than a quest for the truth becomes clear when these tough-minded skeptics only challenge the science they don’t like—evolution, Big Bang, climate change, and so on. Their agenda shows when they let stand the science that is truly counterintuitive like Relativity or quantum mechanics.

Sometimes this is an attempt to bypass science. Science isn’t saying what they want to hear, so these armchair scientists bypass science and appeal directly to other laypeople. The Disco Institute is an Intelligent Design thinktank that does this. They don’t spend their money on unbiased research that might change the scientific consensus. They’ve already lost that war, so they write popular-level books and newsletters to appeal to individuals.

The most popular example that I come across is the typical fundamentalist attitude toward evolution. No ivory-tower geeks are going to shove nutty atheist science down the throats of these red-blooded Americans. And yet they accept Christianity! It would be nice if a little of that tough skepticism were applied to Christianity.

Or, we can look at it from the other side. Christians often tell atheists to drop their arrogance and have some humility, to admit they don’t know everything, and to open their minds to the possibility of the supernatural. The irony is when some of these Christians go on to push the Appeal to Ego, which is 190-proof arrogance.

More about the scientific consensus here and here.

The idea here is to adopt a worldview simply because it’s more pleasing than the one with the evidence. The SMBC comic above neatly illustrates this view with this syllogism:

I do not wish to be sad;

Here’s a specific example. Atheist philosopher Bertrand Russell illustrated the Problem of Evil with the example of a dying child and asked how a good god could allow such a thing. Christian apologist Greg Koukl answered this way:

Christian philosopher William Lane Craig offered this response: “What is the atheist Bertrand Russell going to say when kneeling at the bed of a dying child? ‘Too bad’? ‘Tough luck’? ‘That’s the way it goes’?” No happy ending? No silver lining? Nothing but devastating, senseless evil?

What??? “No happy ending?” The child is dying! No, there’s no goddamn happy ending. (And notice that the original problem remains: they’ve offered no defense for why this would be part of an all-good god’s plan.)

An atheist comforting the dying child would do what a Christian would: read books or tell stories or remember happy events or in some way help the child feel comfortable and loved. The difference would be that the atheist wouldn’t handwave comfort, either for themselves or the child, through stories from the Egyptian Book of the Dead, the Greek myth of Hades, the Hindu idea of reincarnation, Christian heaven and hell, or whatever afterlife story happens to be popular in the local culture.

Koukl responds with claims about the Christian worldview—God is patient and merciful, God has a plan, and so on—without evidence, as if that counts for something. He skips over that messy supporting-evidence step and just takes his worldview as a given, claiming the win because he thinks his worldview is happier.

This is the Pragmatic Fallacy—some custom or practice is worthwhile because it makes me feel better, not because its claims are true. More here and here.

Continue with #49, Science is Built on Christianity.

If your faith is so fragile
it cannot handle questions, doubts, and honest inquiry,
if it is so threatened by the full engagement of your heart & mind
it runs from potential challenges,
that’s not faith; it’s fear.
— Christian apologist Rachel Held Evans

Image from SMBC, used with permission
.