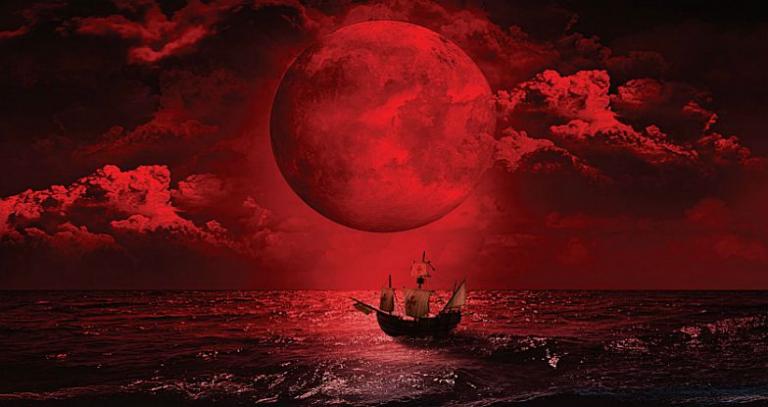 John Hagee likes to get overwrought about astrology, which is odd given that he’s a Christian pastor.

The Bible speaks of a blood moon: “The sun will be turned to darkness and the moon to blood before the coming of the great and dreadful day of the Lord” (Joel 2:30–31). Hagee proposed a fun new way to look at that. The Jewish spring festival of Passover and fall festival of Sukkot always begin on a full moon. Lunar eclipses only happen during full moons, and with an average of two per year, an eclipse at the beginning of these festivals (somewhere in the world, anyway) is common.

Hagee’s innovation was to (1) call a lunar eclipse (which often makes the moon reddish) a “blood moon,” (2) assign significance to these events happening on the Jewish festivals, and to (3) declare that four in a row (not three or five or some other number) is God telling us something. With the launch of his 2013 book, Hagee said, “The coming four blood moons points to a world-shaking event that will happen between April 2014 and October 2015.”

Remember that period? Who hasn’t said, “Where were you during the period April 2014 through October 2015 when that really dramatic thing happened?” We’re lucky to be here talking about it!

It’s refreshing to see a Bible scholar with no reluctance to make God’s unchanging word into a marionette that tells us a new story.

Hagee’s Four Blood Moons became, not only a bestseller (I’ve critiqued Hagee’s book), but a movie. I attended the premiere and made it out to tell the tale.

The single showing in my neighborhood was a nearly packed house, and the Christian audience murmured occasional appreciation.

The movie was a string of supposed scenes from history to illustrate the three times in the past 500 years when we’ve had these tetrads (four blood moons on four consecutive Jewish festivals six months apart) interspersed with commentary by various experts.

A JPL scientist was an early expert, and he explained why lunar eclipses are usually red (what little sunlight remains passes through the earth’s atmosphere so that the moon is illuminated only by sunsets), so we’re off to a good start with a grounding in science and logic.

Hugh Ross, a retired astrophysicist who’s now an evolution denier, played a surprising and refreshing role as skeptic, but more on that later.

As we began the look at prior tetrads, John Hagee told us to “put doubt aside and believe.” But why? Don’t you have a burden to show us a reason first? He repeated the book’s subtitle, “Something is about to change.” I wondered if the omniscient creator of the universe could be a little clearer—or am I asking too much?

Tetrad 1: Spanish Inquisition and the Edict of Expulsion, 1492

I’m sure the script writers couldn’t get a “damn!” or a bare breast into this Christian script, but they have a torture scene where an ex-Jew, passing as a Catholic during the Inquisition, is tested for his loyalty. I must get offended at the wrong things.

Next, Christopher Columbus is portrayed as a Jewish patriot carrying these Spanish Jews to safety in the New World. A girl in one of the families gives the great explorer a yellow cloth star, an obligatory label the Jews had to wear. (In Nazi Germany, yes, but in Spain five centuries ago? I wasn’t able to find anything to support this, and it sure sounds like artistic license.)

While Columbus’s second voyage in 1493 did have colonization as a goal, it carried just 1200 men (Wikipedia mentions nothing about the Jewish families shown in the movie). The voyage began over a year after Spain’s 100,000 Jews were supposed to have left.

Also a year late was the first blood moon. Hagee would have us believe that God’s 18-month show began a year after the problem. Hagee says that God is shouting his message, but he needs to enunciate a little more clearly.

The movie continues with scenes in America. The goal was to show Jews as part of the American fabric from the beginning, which invited blather from history revisionist David Barton about America as a Christian nation.

This event lines up with a tetrad no better than the previous one. Here again, the first blood moon was a year late. Notice also that the most significant recent event for Israel, the Holocaust, apparently didn’t deserve a tetrad.

We’re told that Israel’s victory in the war launched by Arab states the day after independence was a miracle. If you want surprising tales of victory, you can read about Hannibal’s victories over the Romans or Alexander’s over the Persians or even George Washington’s over the British. No effort was made to show how Israel’s victory—which might indeed have been unexpected—rose to the level of miracle.

Hagee tells us that God has blessed the U.S. because the U.S. has blessed Israel, and we come to see that this is the point of the movie: the U.S. must continue to support Israel financially, militarily, and diplomatically. Or else something.

We see scenes from the war. Two Israeli soldiers capture an Egyptian platoon. A bomb landed among some civilians but didn’t explode. There’s a story of Egyptian soldiers surrendering to an army of angels.

Happy events? From the standpoint of Israel, sure. Evidence of divine intervention? I don’t think so.

Another expert tells us that our moral compass is broken when we leave God and Judeo-Christian values.

Hagee says that this tetrad is even more super-duper than the previous ones since it overlaps a Shemitah (Shmita) year. The Shemitah is the seventh year in a 7-year cycle. It’s a time to let the land go fallow and to forgive debts with fellow Jews. However, Wikipedia says, “There is little notice of the observance of this year in Biblical history and it appears to have been much neglected.”

Hagee has dusted off this old concept and declared that this confluence is unique in human history. First, I’m sure that if we go back before Hagee’s cherry-picked tetrads, we’ll find Shemitah years in there and periods where no dramatic event happened to Israel or to Jews, even with Hagee’s generously sloppy criteria. Second, this Shemitah year only overlaps two of the eclipses. And third, why expect divine wrath if Shemitah is a time of forgiveness?

Hagee was asked why this wasn’t astrology. He said that astrology is a false science, not at all like what he does. The movie had tried to ground the idea of getting wisdom from the sky with the Star of Bethlehem, but it sounded to me more like seeing portents in comets.

(One of many interpretations of the star of Bethlehem story is full of astrology, and full of holes.)

The biggest surprise in the movie was Hugh Ross saying that this was all just a coincidence (prediction after the fact) and that the number of eclipses was arbitrarily chosen—why four? He also noted that the eclipses couldn’t be seen in Israel—wouldn’t that be important if Israel is the focus? So, yeah—it’s astrology.

Hagee wrapped up with a threat. God said: “I will bless those who bless you [that is, Israel], and whoever curses you I will curse” (Gen. 12:3). God is working through America to support Israel. Stop supporting Israel, and you’ll regret it. We were told to think of the countries who opposed Israel: Babylon, Greece, Rome. But what do we conclude from this? Empires come and go. This is like God’s warning about the fruit in Eden: eat it, and you will surely die. Uh yeah—eventually.

And if God is working through America, what’s the concern? Surely God can’t be stopped by gay-loving liberals who are soft on Israel.

As the movie ended, the audience applauded. And the screen showed an ad for yet another Hagee book.

Ardency and sincerity
are no substitute for veracity.
— Richard S. Russell