The Bizarre Origin of Kosher Rules

Today is Customer Appreciation Day, since this blog just passed another milestone! There are now more than 1200 posts, more than four million pageviews, and almost 350,000 comments. Thanks, everyone! Without your interest, this blog wouldn’t exist. 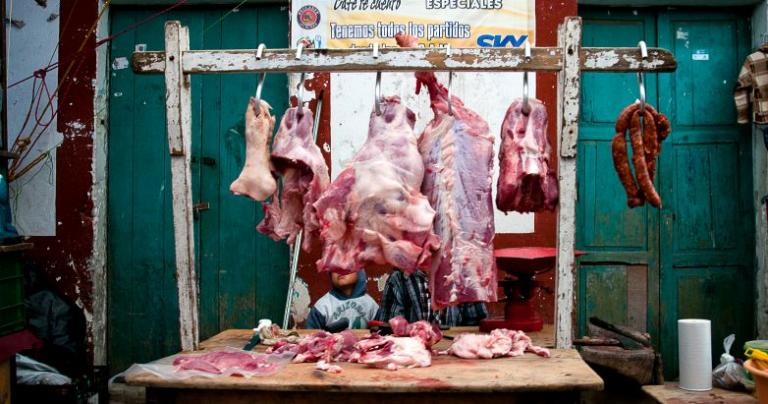 I didn’t know the basis for all the kosher rules, so I thought I’d find out.

Where do kosher food laws come from?

Part of the source of kosher food laws is the distinction between clean and unclean animals as specified in Leviticus and Deuteronomy. Kosher land animals must have a divided hoof and chew its cud. Kosher fish must have fins and scales. Birds, insects, and reptiles are also enumerated. Anthropologist Mary Douglas has found some logic in what, at first glance, seems arbitrary (discussed here).

Things can get complicated. What about seaweed? Seaweed is kosher, but any microscopic crustaceans on the seaweed are not.

What about gelatin, which can be made from the skin and bones of both kosher and non-kosher animals? Some rabbis play it safe and label it non-kosher, though others say that it has been so completely processed that it no longer fits into the “meat” category.

What about honey, eggs, and cheese? What about food prepared by non-Jews? What about eating meat and fish together? Opinions vary.

The rules are many, and most come from later debate rather than directly from the Bible.

This is the “no cheeseburgers” rule, where beef (meat) and cheese (dairy) can’t be eaten together. Of course, the Bible doesn’t specifically say, “thou shalt not eat cheeseburgers.” What’s odd, though, is that it also doesn’t say, “thou shalt not mix meat and dairy.” What it does say (three times) is, “You shall not boil a kid in its mother’s milk,” and from this odd demand comes the no-mixing rule.

(This was the tenth commandment in the second ten commandments. You remember how Moses got one set of stone tablets, smashed them on the golden calf, and then went back up for a second set? Exodus 34 gives the second set, and it ends with the kid rule. The two very different sets of Ten Commandments are discussed here.)

Ever careful to avoid pissing off Yahweh (or perhaps just eager for an intellectual conundrum to wrestle with), Jewish scholars have spent gigajoules of mental energy through the centuries thinking up the correct resolution of many special cases. Out of caution they interpret the rule as much more than a demand to avoid that single dish, but where precisely in that command is the problem—is it the boiling? The specific animal (newly born goat)? The vehicle (milk)? The relationship (mother/offspring)? Which of these could be changed to bring it in line with Yahweh’s wishes?

Some have said that this was a popular dish among neighboring tribes. Many of the Old Testament rules strive to differentiate the Israelites from their neighbors—how hair is to be cut, mandatory circumcision, and no ritual prostitution, for example. Kosher food rules were just another way the Chosen People could set themselves apart. There’s more evidence for this separation in this rule: “Be careful not to make a treaty with those who live in the land” (Exodus 34:15), which is in the same chapter as the Ten Commandments instance of the kid rule.

Some have said that this was a pagan fertility ritual and that the dish wasn’t meant to be food but was to be poured on fields for the benefit of crops or flocks. Since this ritual was an appeal to some other god, not Yahweh, it broke the no-idolatry rule.

Some have focused on the relationship—it pushes the cruelty button by cooking the kid in the substance meant for its survival. The mother has become an instrument in the destruction of her offspring, and the milk that gives life participates in death. Or maybe it pushes the incest button to mingle the life substances of mother and son.

Some say that mixing meat and milk was thought to be unhealthy.

One scholar has collected the various arguments into eleven categories (source, p. 120). All authorities agree that there is no consensus. Perhaps the origins of the rule were lost in time even to the original Bible authors.

Like the unclean animals rule, the no-mixing rule has gloriously complicated special cases. Does cheese or yogurt count as dairy? What rules apply to substitutes like almond milk? Can you cook meat and dairy for someone else to eat? Suppose you inadvertently mixed a tiny bit of meat in a dairy dish or vice versa—how much must you add to break the rules? Can plates, cutlery, and cooking pots be used for dairy and then cleaned and used for meat? Suppose you eat a kosher meat dish and then a kosher dairy dish—since meat and dairy are mixing in your stomach, is that a violation?

That’s a lot of hand wringing from the simple command to not make one particular dish. You’d think that if this is where God had wanted the Jews to go, he would’ve made that clear.

There is nothing the god you imagine
can do outside your head that I can’t do, too.

And there are many things I can do
that your god pretty obviously can’t. . . .
Outside your own imagination
your god is utterly powerless.

March 4, 2019
What Do Churches Have to Hide? The Solution Is Simple.
Next Post

March 8, 2019 Debunking 10 Popular Christian Principles for Reading the Bible (3 of 3)
Recent Comments
143 Comments | Leave a Comment
Browse Our Archives
get the latest from
Cross Examined
Sign up for our newsletter
POPULAR AT PATHEOS Nonreligious
1

'No gratuitous violence in the Bible,'...
The Freethinker
Books by This Author Books by Bob Seidensticker