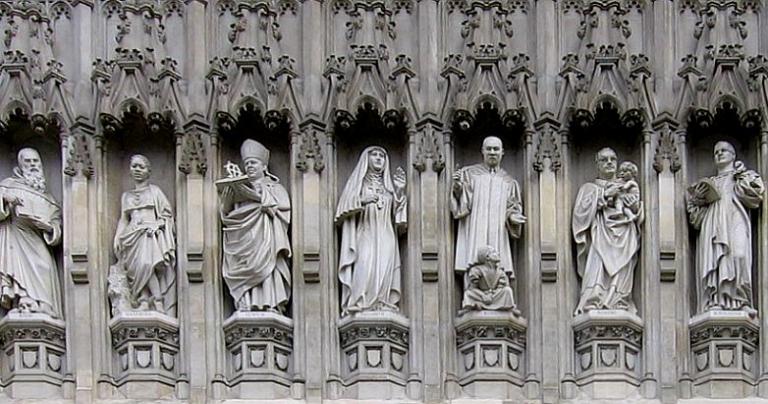 Larry Tomczak of the “Here’s the Deal” blog is mightily concerned about this whole gay thing. In a post from 2015, “Church Is Facing a Dietrich Bonhoeffer Moment,” he says it’s the church’s great test.

Here’s what the church faces:

Opposition to Christianity is becoming more aggressive and hostile. Nowhere is this more evident than in the areas of natural marriage and sexual purity.

I’ll grant that opposition to Christian stupidity can be aggressive, but where Christians expect no more than the U.S. Constitution grants them, I support their rights as strongly as I do mine. That attitude is widespread in the atheist community.

As for “natural marriage” and sexual purity, it’s an odd world where the sky is falling on Christians and yet they aren’t being forced to do anything.

Tomczak works himself into a frenzy as he imagines modern Christians in the same position as Christian martyr Dietrich Bonhoeffer.

After 5,000 years of Western civilization defining marriage as the union of a man and woman, we are on the precipice (barring miraculous intervention) of the Supreme Court imposing homosexual “marriage” on all 50 states.

Allowing someone else to have consensual sex in a way that’s not your cup of tea is not an “imposition.” Same-sex marriage is now legal nationwide, and no thoughtful person is surprised that the sky hasn’t fallen.

You want an imposition? Remember Bonhoeffer, the man you reference in your post. He was hanged in Flossenbürg concentration camp in Germany just weeks before the end of the war for working with the Resistance. That’s an imposition.

As for your anxiety about marriage being redefined, it’s redefined all the time. Just in my lifetime, laws forbidding interracial marriage have been struck down, divorce is much easier, adultery has been redefined, and marital rape is illegal. Don’t pretend that it’s been unchanged since God invented it.

Recently the largest Protestant denomination, the Presbyterian Church USA, changed the wording of its constitution to fully embrace sodomy-based “marriage.”

So what kind of marriage do you have, Larry? A screwing-based “marriage”? I guess I’m old fashioned, because I thought love was a major part of it. Marriage vows say nothing about making either whoopee or babies. Instead they have a promise “to have and to hold, from this day forward; for better, for worse; for richer, for poorer; in sickness and in health; until death do us part.” But perhaps Larry has no use for traditional interpretations of marriage.

I think I’ll stick with my version of marriage. It’s based on reality instead of hysteria.

Apparently it’s time to circle the wagons, because he tells us we’re in the “perilous” end times foretold by the Bible.

We are facing a “Dietrich Bonhoeffer Moment.” You recall that he chose civil disobedience and disobeyed Nazi law that stated that protecting Jewish people was against the law. He was hung for his stand. He also said prior to his death, “Silence in the face of evil is evil itself. Not to speak is to speak. Not to act is to act.”

Our host next translates this into examples of biblical heroes obeying God at the risk of their lives: Daniel and his three friends, Esther, the disciples of Jesus.

Take deep breaths, Larry. Maybe a cold compress on the forehead. Tell yourself that it’s just the vapours. You’re back in America, where you can avoid getting gay married all you want.

You’re confusing (1) being imposed upon with (2) being allowed to impose your views on the rest of the country by law. No, you can’t do that. Don’t expect an apology.

Two things stand out here. First, of course, is the arrogance of equating the difficulties of anti-gay Christians today with those of Bonhoeffer in the 1940s. It’s his own example, and it demolishes his position. Unlike Bonhoeffer, Tomczak can say or write or hand out on the street corner just about anything he likes.

And that brings up the second point. He has the freedom to say these things because of the U.S. Constitution. The secular U.S. Constitution, the one that tells Congress not to make laws based on how they would please God. But the same secular public square that protects me from Christian excesses acts the other way as well. How about a little appreciation for that?

In one final failure of this argument, according to a 2015 biography, Bonhoeffer was likely gay.

April 5, 2019
Christian Cowardice and the Suicide Tactic
Next Post