Four Years After Obergefell: Has the Sky Fallen? 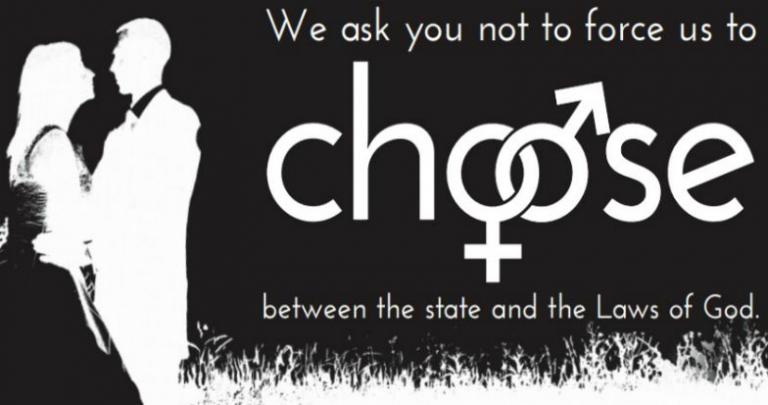 The landmark U.S. Supreme Court decision Obergefell v. Hodges passed its four-year anniversary a few days ago. Let’s check in with a conservative Christian declaration published just before the case was decided. How well do their warnings hold up four years after the decision?

(Time hasn’t been kind to this argument when we notice that the original links are no longer valid. Perhaps these conservatives realize that this project isn’t something they want to be reminded of. Let’s shove their faces in their dirty laundry.)

First, the ad wants to make clear who’s the boss.

We will not honor any decision by the Supreme Court which will force us to violate a clear biblical understanding of marriage as solely the union of one man and one woman.

Is there a “clear biblical understanding of marriage”? Not really. Not only do you disagree on same-sex marriage within your own religion, the Bible says much about all sorts of embarrassing marriage customs and prohibitions sanctioned by God: a prohibition on interracial marriage, concubine sex, sanctioned rape, genocide while keeping the virgin girls, slave marriage, levirate marriage, and of course polygamy. You still want to go with “clear biblical understanding”?

You can believe whatever you want, just don’t imagine that your beliefs will be taken into account when making laws. You need a secular argument in a land governed by a secular constitution.

What Would MLK Do?

To take this further, some conservative Christians say that their church would embrace homosexuals, as long as they’re celibate. This sounds like an enormous burden they thoughtlessly impose on others with no concern for the cost. What I want to see is such a Christian walking the walk. That is, I want to see a 20-something straight Christian who commits to a celibate life to demonstrate that it’s a reasonable request. They declare how much they love their homosexual brothers and sisters. Surely there are thousands of Christian men eager to make this pledge—no?

Apparently, marriage is all about the sex. Who knew?

Flailing around for an argument, these conservative Christians want to imagine that marriage is about nothing but children. But of course there’s nothing in the traditional marriage vows about making babies: “To have and to hold, for better, for worse, for richer, for poorer, in sickness and in health, until death do us part.” Nor is there an obligation in a state’s marriage license about making babies. Nor are married couples ever penalized for not having the correct number of babies (more).

That they’re forced to shoehorn marriage into this “making babies” mold proves that playing politics is their goal, not guarding the sanctity of marriage.

Back to the ad:

That ship has already sailed. There’s Davis v. Beason (1890), which stomped on the Mormons’ biblically based right to polygamy. There’s Loving v. Virginia (1973) that threw the Bible in the garbage by declaring that mixed-race marriage was legal in every state. Divorce has been made easier. Adultery has been largely decriminalized. Marital rape is now a crime. “Head and Master” laws, which put the man in charge of a household’s assets, are gone.

You do know that the Bible doesn’t call the shots in a country with a secular constitution, right?

My, aren’t we dramatic! I think someone needs some pearls to clutch.

It’s been four years for the country and fifteen years for the first state, Massachusetts. Same-sex marriage is legal in about 30 countries. Has marriage been destroyed? It seems to me that this fight has only enhanced the reputation of marriage as a desirable and valuable institution at a time when it’s seen as optional to many.

In the U.S., the Constitution runs the country, not the Bible. If that’s a problem for you, I can help you find the door.

Seriously? This is the hill you want to die on—the right to discriminate? To restrict rights? You worship a god whose prejudices mirror your own?

Go ahead—hold your breath to try to get your way. Your view is becoming more extreme. It will look even more so tomorrow.

July 9, 2019 When Christians Blame God for Disasters
Recent Comments
1,021 Comments | Leave a Comment
"Has this been going on for a couple of weeks?Wow--and I thought it was incoherent ..."
Bob Seidensticker How to Say, “I Told You ..."
"This is what I got after hitting "Download Images". https://uploads.disquscdn.c...I don't usually do that."
Greg G. How to Say, “I Told You ..."
"Anointing it with a couple drops of oil in the pot before boiling helps de-stick ..."
Zaqqum The Kalam Argument: infinite regress and ..."
"Yeah--a different sucky notification.But yours has even less information than this? Wow. Can you end ..."
Bob Seidensticker How to Say, “I Told You ..."
Browse Our Archives
get the latest from
Cross Examined
Sign up for our newsletter
POPULAR AT PATHEOS Nonreligious
1