Prayer: Because Jesus Already Knows What You Want, He Just Wants to Hear You Beg

Prayer: Because Jesus Already Knows What You Want, He Just Wants to Hear You Beg October 29, 2019 Bob Seidensticker 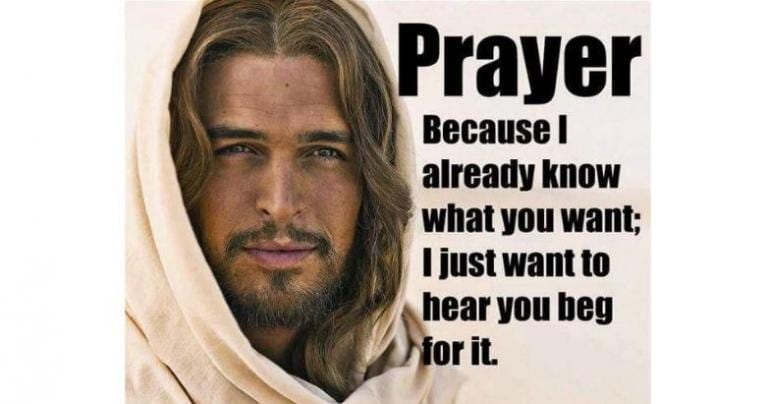 You don’t often come across clever atheist memes from Christians, but for me this was an exception. Christian apologist Tom Gilson attacks the meme in the image above in an article published today: “Atheist Memes: Be Wise—Don’t Take the Bait!”

(I commented on another Gilson post just a month ago.)

How Christians are (apparently) supposed to respond

[I wish] believers would refuse to let atheists bait them. Or if I may switch metaphors, that we’d refuse to play by atheists’ rules.

Huh? What atheist rules? You mean reason and evidence? Are atheists out of line for pointing out (apparently) ridiculous aspects in Christians’ supernatural views? Perhaps what he really wants is for Christians to avoid getting into the ring if they’re likely to get beaten.

But why avoid engaging atheists? Wouldn’t that be a chance to follow 1 Peter 3:15, “Always be prepared to give an answer to everyone who asks you to give the reason for the hope that you have”?

The article did contain the hint of one point that I agree with: that atheist/Christian discussions are rarely fruitful and usually frustrating. But that’s not where Gilson wants to go.

What Would Jesus Do? Apparently, ignore the challenge, assume the rightness of his position, and press forward. In Jesus fashion, Gilson wants to ask questions “to help [atheists] see that their question is built on faulty premises.”

Here are the questions (in italics) in Gilson’s Socratic Method to gently guide the foolish atheist to the Truth.

Tell me, please, what you think prayer is.

Here are the claims made for prayer:

Ask and you will receive (John).

Ask and it will be given to you; seek and you will find; knock and the door will be opened to you (Matthew).

Whatever you ask for in prayer, believe that you have received it, and it will be yours (Mark).

He who believes in me will also do the works that I do; and greater works than these will he do (John).

I wonder where you got that information from?

From Jesus himself, if the Bible is to be believed.

Do you think that’s all there is to prayer? Has it occurred to you there might be more to it?

One answer: Yes, that’s it. If Jesus wanted to qualify the method, he would’ve done so. Surely, Christians must agree that the Holy Bible is a reliable source of the declarations of Jesus.

Another answer: Christians aren’t stupid, and they realize that “Ask and you will receive” isn’t how prayer actually works. So they imagine qualifications that for some reason weren’t included in the gospels—it was your fault for asking for something selfish or foolish, God has a better plan, God isn’t your genie, God did answer it (just not the way you wanted), and so on. I must repeat: while these are popular rationalizations within Christianity, that’s not how prayer is defined by Jesus.

The Christian who is disappointed after taking the gospels’ promises about prayer at face value is told that they need a mature faith. That is, put your faith first and reason second. With a clash between faith (an earnest prayer offered) and reason (an unanswered prayer tells you that the Bible’s claims are flawed), the “mature” Christian will whip up reasons to listen to faith and ignore reason.

Tell me what you understand of the character of Jesus, that would lead you to think he might be pulling a trick on us like the meme suggests?

You ask the wrong question. You don’t take Jesus in the gospel story as a given and then wonder why a prayer wasn’t answered. Instead, you approach this as you would any remarkable claim—say, cure cancer by changing your diet or invest your retirement savings in this new startup. You assume nothing up front. The Bible’s claims about prayer are easy to test, and disconfirming evidence follows quickly. It’s not that “Jesus” is playing a trick, it’s that the Bible’s supernatural claims are false, just like all the others.

If Christians were unbiased, they wouldn’t double down after prayer has been shown not to work but would question whether Christianity is worthy of their belief.

Why do you think Christians pray? Is it because the issue you’ve raised here has never occurred to us?

Prayer provides intermittent rewards, and Christians are like pigeons in a Skinner box. Pigeons in cages who are fed food pellets at random times imagine that they somehow caused the food to appear. If they were preening or pecking or flapping when the food appeared, they try to conjure up more food with repetitions of that action. It becomes a superstition.

It’s not that Christian newbies tentatively try prayer, find that it works, and increasingly use it as a reliable tool. No—belief comes first, and prayer is what believers do. They get intermittent reinforcement through the odd coincidence or occasional wish that comes to pass.

Your view of Christians here seems to be that we’re mindless and stupid. Am I right to read you that way, or did I get that wrong?

Most Christians (indeed, most religious believers) adopt the religion of their surroundings. They believe because they were taught to. The combination of being raised to believe false things and being a smart adult with a mature Bullshit Detector means the adult can either see that their supernatural beliefs are no better grounded than those in Hinduism or Buddhism, or they can double down and use their intelligence to justify their beliefs after the fact (Shermer’s Law). That avoids cognitive dissonance, the discomfort from holding two contradicting beliefs.

Back to your question, it makes sense that children accept the guidance of their community as they grow up. They’re not stupid for believing that the stove can be dangerous, you must be careful crossing the street, and Jesus knows everything. It’s just that society’s truths are wrong sometimes.

What about that meme?

True to his word, Gilson has avoided taking the bait and actually addressing the meme. No, you wouldn’t want to play the atheist’s game and actually respond to the question of why prayer is needed at all when Jesus/God already knows what you want and need.

Other posts on prayer:

Prayer is an act of doubt, not faith.
If you really thought your god was watching over everything
and you genuinely trusted in his “plan,”
you wouldn’t be praying in the first place.
— seen on the internet