Not Even Hitler Can Help This Christian Argument

Not Even Hitler Can Help This Christian Argument November 1, 2019 Bob Seidensticker 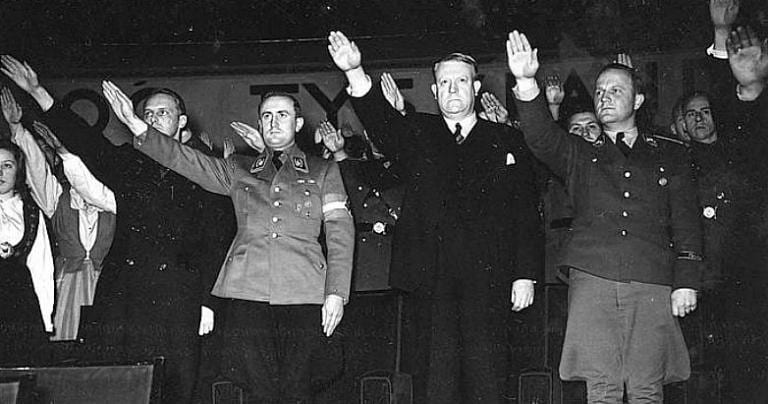 In my reading I occasionally come across an argument that makes simple and important observations about a familiar argument that I had missed. I love such occasions, and I wish it happened more often. Let me summarize one case for your benefit, a video and article by NonStampCollector. I’ve added a bit of my own material, but the credit for most of the good stuff goes to the original author.

He begins with a quote that is almost surely by William Lane Craig. (NonStampCollector uses a direct quote to show that he’s responding to authentic Christian arguments but keeps it anonymous to avoid tangents related to the source.)

Say Hitler had won the war, and we now lived in a society where because of that, and the propaganda, everyone believed that anti-Semitism was good, and gassing Jews was fine. Would that mean then that that was simply the morality that we accept? Is morality simply, at the end of the day, what society thinks about a matter? Or would it still be wrong even though nobody thought it was wrong?

WLC wants to use our shared revulsion of mass murder and attempted genocide to argue for a God-based grounding of that shared morality, but ignore that. Let’s just use his thought experiment of Nazi World, where Germany’s victory plus propaganda has convinced everyone that the genocide of Jews was right.

Some people living in Nazi World might accept this worldview reluctantly. They might say that, though the Holocaust was a necessary evil, it was still evil. Nevertheless, in this world, the person who labels the Holocaust as irretrievably wrong would be like today’s Nazi skinhead—a member of a tiny, ridiculed, dangerous minority. In Nazi World, Americans would see Hitler as another Lincoln—a man who had the courage to make the tough moral call.

You can be sure that Nazi World historians and public intellectuals would have hammered together detailed arguments to justify the Holocaust. This is a crazy notion in the West in the 21st century, but it is an interesting thought experiment (indeed, more interesting than I’d realized).

I’ve responded to this argument of WLC’s in a prior post, but here’s where NonStampCollector’s argument moves into new territory.

Pause and take a long look at Nazi World. It’s outrageous and inconceivable at first glance, but is it really? Think about it. Some traits should seem quite familiar to us today. They surround us. Any Christian who remembers their Sunday School Bible stories will have come across this very thing.

“[Joshua] left no survivor, but he utterly destroyed all who breathed, just as the [Lord] had commanded” (Joshua 10:40).

“The Lord heard the voice of Israel and delivered up the Canaanites; then they utterly destroyed them and their cities.” (Numbers 21:3).

“[God said:] Strike the Amalekites and utterly destroy all that they have, and do not spare them; but put to death both man and woman, child and infant” (1 Samuel 15:3).

“You shall consume all the peoples whom the Lord your God will deliver to you; your eye shall not pity them” (Deuteronomy 7:16).

Christians like WLC tell us that mass murder and genocide are objectively wrong and that the Bible backs up that instinct. They point to the Bible when they say that the Holocaust was immoral, but look at where this takes them. With their blind defense of the Bible, Christians have created Nazi World, that terrible and inconceivable world in which genocide is accepted, both by them and their god!

Could a German victory plus propaganda really create a long-lasting and widespread assurance that genocide was correct? We have an example that’s already lasted longer than Hitler’s hoped-for thousand-year Reich—the widespread belief among the world’s 2.17 billion Christians that the Israelite genocides in Canaan were morally correct.

At the risk of putting too fine a point on this (or perhaps luxuriating in schadenfreude), let’s rewrite the WLC quote above.

Say the Israelites had driven out the inhabitants of Canaan, and we now lived in a society where because of that, and the propaganda, everyone believed that genocide was good, and killing Canaanites was fine, would that mean then that that was simply the morality that we accept? Is morality simply, at the end of the day, what society thinks about a matter? Or would it still be wrong even though nobody thought it was wrong?

“Killing Canaanites was fine” is indeed the morality that Christians typically accept.

In response, Christian apologists demand to know the standard by which we atheists judge the Bible wrong. They’ll charge atheists with appealing to an objective moral standard and so acknowledging an Objective Moral Standard Giver. If instead atheists reject this Morality Giver, they’ve lost their moral foundation. They’re left with whatever morality they can cobble together themselves, but all that gives you is a subjective, changeable, culturally specific morality. (I respond to apologist Greg Koukl trying this trick here and here.)

But whatever reasoning an atheist uses to conclude that Old Testament genocides and murder are barbaric is already better than basing any reasoning on the Bible, because that reasoning is circular: the moral decisions made in the Bible are right because the Bible’s morality says they are. Judging the god who ordered genocide by the standards given by the god who ordered genocide is like saying that Hitler was moral because Hitler said so. The atheist is able to make the obvious call and declare genocide wrong. The Christian response: “It’s complicated.”

Where could you find justification for the Holocaust? Today you find that only in ancient holy books that justify genocide. NonStampCollector ends with this observation: “If there’s a worldview that leads people to excuse and condone appallingly cruel behavior, it’s not atheism, it’s theism.”

Religion is a byproduct of fear.
For much of human history,
it may have been a necessary evil,
but why was it more evil than necessary?
Isn’t killing people in the name of God
a pretty good definition of insanity?
— Arthur C. Clarke

October 29, 2019
Prayer: Because Jesus Already Knows What You Want, He Just Wants to Hear You Beg
Next Post

November 7, 2019 Silver-Bullet Argument #27: Christianity Is Full of Symbolism
Recent Comments
169 Comments | Leave a Comment
Browse Our Archives
get the latest updates from
Cross Examined
and the Patheos
Nonreligious
Channel
POPULAR AT PATHEOS Nonreligious
1