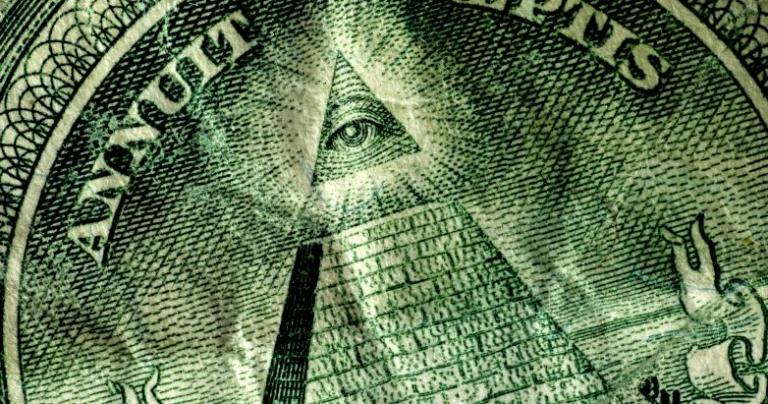 Christianity and the Bible are full of symbolism. For example, during the Flood it rained for forty days, not just a good long time. Baptism rinses away sins like water rinses away dirt. In Communion, the faithful consume the flesh and blood of God—at least in a symbolic fashion.

Why doesn’t the Bible read like a history book? That Christianity needs and uses symbolism is a silver-bullet argument against Christianity.

(This is argument 27 in a list that begins here.)

Consider first the symbols we see around us. Red means stop and green means go, but together they mean Christmas. Thanksgiving, Halloween, and other holidays have their own colors, as do sports teams, political parties, and political movements. Green means concern for the environmental, or maybe it means concern for money (at least in the US). White means purity, though in China, it means death. In Japan, “death” is a homonym for “four,” which is why gift tea sets for the Japanese market have five cups, not four. Hoping to attract Japanese gamblers who want to avoid unlucky room numbers, there are hotels in Las Vegas where the floor numbering has no 4s, and the floor after 39 is 50.

Movies and television use standard symbols as shorthand. Fireworks might mean sex. Pages can fly off a wall calendar to show the passage of time. The dismantling of a small piece of the Berlin Wall or the toppling of statues of Lenin or Saddam Hussein in themselves meant little, but they are convenient and photogenic symbols of an enormously significant regime change.

Another area of fiction where symbolism can be important is literature. Water at night can be used as a symbol for the unconscious. Fog or a squawking bird might suggest danger. Spring and flowers represent youth and vitality, and falling leaves and snow represent age and death. Mention a rose to suggest love or beauty, or focus on its thorns to suggest danger or deception. The town in the 2016 Preacher television series is Annville (think “anvil”). In Shakespeare’s Macbeth, guilt drives Lady Macbeth to imagine her hands stained with blood that won’t wash off (a denial of another symbol, the cleansing effect of water through baptism).

Red meaning “stop” is arbitrary, but literary symbolism makes a more universal appeal. One purpose of symbolism is to engage the reader. Instead of writing, “Bill’s wicked side slowly overcame his good side in his mind,” you might show a black crow picking at a dead white dove. Readers enjoy figuring things out for themselves. In addition, a symbol can be taken as a more universal statement than, say, the moral contest in a single person’s mind.

Symbolism in science and history

Contrast storytelling in literature or on the screen with science and history, which have no use for literary symbolism. There is no point in the reader having to figure out what the author means. Here, good writing is clear and straightforward.

Let me mention one apparent counterexample. Take one aspect of quantum physics—for example, that the nucleus of an atom has protons and neutrons. This is just a model. We don’t know for certain that this model is exactly how it is in reality, but if we assume that model, we can make very accurate predictions. The theoretical model correctly predicting or explaining experimental results is as good as it gets.

Notice the difference. A scientific model is as clear as possible, like a window. A symbol is something to figure out and think about.

Christianity claims to tell us true things that happened in the past (history) and true things about reality (science). Nevertheless, we find lots of symbolism, which puts it in the fiction camp with literature and movies. If there really were a God with a message we needed to understand, he’d just present himself and give us the message. He’s not even constrained by a limited timeframe so that he would need to document his message for posterity in a book. He could effortlessly be on call to every person on earth throughout history.

As an example of Christian symbolism, baptism claims to rinse away sins like water rinses away dirt. You do something in the real world (baptism), and something parallel happens in the supernatural realm (sins washed away).

Christian pilgrims may dial it up by getting baptized in the Holy Land. But baptism is baptism, and there are no bonus points for doing it a second time, doing it in the Jordan River where Jesus was baptized, or doing it while wearing a white robe. But they do it anyway. There’s no doubt that these are important to the Christian pilgrims, but they’re just symbolic additions to a symbolic ritual.

Communion is another ritual. As background, remember that this comes from a religion where God was fed with food offerings. The energy of the sacrificed animal would rise up as smoke, which the Bible tells us 37 times is accepted by God as a “pleasing aroma.” We also learn that the food value varies depending on the sacrifice. Larger animals are more valuable than smaller ones, human sacrifices are more valuable than animals, and a god (Jesus) is more than a human. Communion is the Christian’s opportunity to participate in this nourishment, because it is a weekly celebration of the sacrifice of Jesus commemorated by symbolically consuming his flesh and blood (or actually consuming it, according to most Christians).

We see more symbolic blood magic with the idea of “the blood of the Lamb” washing things clean (see Revelation 7).

Number symbolism is also popular. God rested on the seventh day, and Revelation has lots of sevens (bowls, trumpets, and more). There are ten Commandments and ten plagues of Egypt, and some of the parables have tens (ten virgins, ten talents). There were forty days of rain in the Flood and forty years of wandering in the Sinai desert, and Jesus fasted in the desert for forty days.

Harold Camping’s embarrassing prediction of the end of the world on May 21, 2011 was based on that date being, by his calculation, (5 × 10 × 17)² days after the crucifixion. What do those numbers mean? According to Camping, 5 = atonement, 10 = completion, and 17 = heaven, so the Rapture would happen after a time period of (atonement × completion × heaven) squared days. (More on Brother Camping’s $100 million absurdity here.)

There’s more number symbolism, of course. The number of the Beast is 666 (or is it 616?). The disciples made a miraculous catch of 153 fish. There were twelve disciples and twelve tribes. There are four authentic gospels (out of dozens) because there are four winds and four points of the compass. But let’s move on.

The new kingdom as described at the end of Revelation was made with “every kind of precious stone.”

Jesus was described as a lamb, a reference to the unblemished lambs in the Passover meal.

The symbol of a fish (ichthys in Greek) was a secret symbol in the early church. The word was an acronym for “Jesus Christ, Son of God, Savior.”

Flames symbolized the Holy Spirit visiting the apostles on Pentecost.

A rainbow symbolized God’s promise to stop destroying the planet.

That was a cursory tour, and you can probably think of more instances of symbols within Christianity—things that mean something different in the supernatural world than they do here.

But symbolism is what you do when you’re trying to bridge a gap. Symbolism is used by art and literature, not history and science. You don’t need to conjure up the supernatural with mystical ideas, symbolism, coincidences, numerology, and so on if it really exists.

If the Bible is God’s message, its purpose is presumably to explain his plan. There’s no room for and no need for symbolism. That the Bible has symbolism argues that it has a different purpose than history.

See also: Why Not Call What God Does “Magic”?

November 1, 2019
Not Even Hitler Can Help This Christian Argument
Next Post