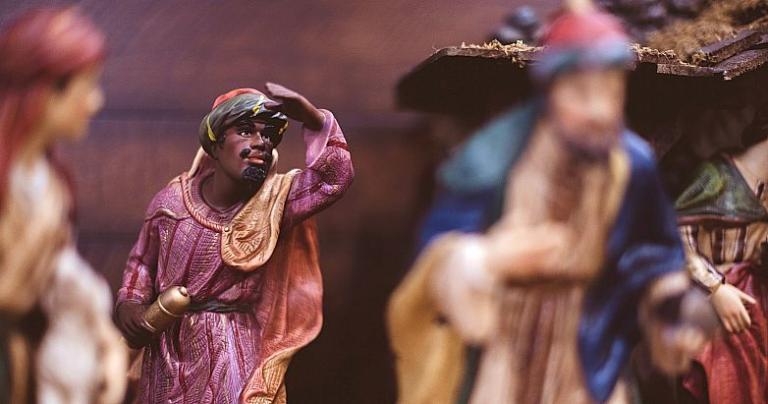 We’ve blown past the initial promise of 20 Bible contradictions and are now at #25 (part 1 here). Let’s continue the Christmas theme and investigate a contradiction in the details surrounding Jesus’s birth.

Too little is made of a surprising passage from Mark. Jesus was preaching in Galilee, and then:

When [Jesus’s] family heard about [Jesus being nearby], they went to take charge of him, for they said, “He is out of his mind” (Mark 3:21).

The point of the story contrasts his actual family, who think he’s crazy, with his disciples, who have abandoned their professions to follow him.

Contradiction #25: Was Jesus crazy, or was he God?

The interesting thing here is his family calling him crazy. How was that possible, when it was clear from other gospels that Jesus was divine? First, consider the evidence in Matthew.

And consider the clues in Luke’s very different nativity story.

Not only are Mary and Joseph assured that their son is divine, but this isn’t a family secret. Word has spread far. The magi informed Herod’s court, and Herod killed infant boys for fear of a rival to the throne; the shepherds tell everyone they can about the angels’ message; Simeon publicly states in the Temple that Jesus is the Messiah; and the Temple teachers see his wisdom for themselves.

Making sense of the contradiction

Let’s return to Mark, where Jesus’s mother and brothers want to take charge of him because he’s crazy. Jesus can’t be both crazy and divine. But drop the requirement that these stories must harmonize, and the resolution is easy.

Matthew and Luke copy (sometimes verbatim) from Mark. In fact, 97 percent of Mark is copied by either Matthew or Luke or both. However, the nativity stories appear only in Matthew and Luke, and the “Jesus is crazy” story appears only in Mark. Mark threw the holy family under the bus to make the point that following Jesus is a higher calling than familial loyalty, but Matthew and Luke didn’t copy that story, perhaps because, as we’ve seen here, it conflicts with the clear evidence in the nativity stories that Jesus is different because he’s divine.

Mark and the other two synoptic gospels had different agendas. Remember that each of these gospels was written decades after the death of Jesus. During this time, dynastic succession was typical. David’s son succeeded him as king, and Herod’s son succeeded him as king, so who would succeed Jesus? (Let’s ignore that the End® was to have happened within months or a few years after Jesus’s death and assume that the movement needed a new leader.) Jesus had no children, so a brother would be an obvious choice.

This created a doctrinal conflict between Paul, who hadn’t even met Jesus in real life, and the James/Peter faction, who installed James, the brother of Jesus, as a leader in the Jerusalem church. The gospel of Mark takes Paul’s viewpoint, so it’s motivated to undercut James by saying that James and the rest of Jesus’s family didn’t believe him. Matthew takes a more Jewish, pro-James view.

In this case, you must set two New Testament books against each other to find the contradiction. Another example of this is how spices were applied to the body after the crucifixion. The gospels of Mark and Luke say that women failed to apply spices on Sunday morning, while John tells us that two men were successful on Friday evening.

But then you have cases where the contradiction is in a single book. For example, John the Baptist wondered if Jesus was The One despite having seen the dove of the Holy Spirit descend on Jesus during baptism, and these stories are both in Matthew.

As usual, the puzzle neatly resolves itself with a natural explanation.

It’s important to understand that history and theology
are interwoven in biblical history,
and nothing about the life of Jesus
can be theologically true that is historically false.
— Christian scholar Ben Witherington

December 14, 2019 A Skeptical Christmas
Recent Comments
410 Comments | Leave a Comment
"Huh--I never thought of it that way but it matches with the rest of the ..."
Greg G. Bible Prophecies: a Miracle Victory and ..."
"The Romans appointed Herod king.But both Jews and Christians anticipate the reestablishment of the kingdom.At ..."
Greg G. Bible Prophecies: a Miracle Victory and ..."
"Oh!! So, it's the "Forgotten Realms".Okay. Well, that's very interesting.You have fun doing that and ..."
Candy Smith More on the Bible’s Confused Relationship ..."
"That's certainly Scotland as I remember it, overcast with an approaching storm."
Michael Neville 8 Tests for Accurate Prophecy and ..."
Browse Our Archives
get the latest from
Cross Examined
Sign up for our newsletter
POPULAR AT PATHEOS Nonreligious
1