Christian apologist Jim Wallace has created an eight-point checklist for sorting things in our world into natural things and designed things. With it, he hopes to show design all around us and thereby overturn evolution.

Part 1 summarized the list. Let’s investigate it in more detail. The first two tests are:

1a. Unlikely from chance + 1b. Unexplainable naturally

If we’re looking for designed things, we must eliminate those caused by nature such as ripples in the sand at the beach or a rainbow after a storm. Science has figured these out, but the problem is when we don’t already know. What do we do with something in the gray area that we encounter for the first time?

For example, the Giant’s Causeway is an area of huge, mostly hexagonal basalt columns on the coast of Northern Ireland. It was explained in legend as a road built by a giant determined to fight his rival across the North Channel in Scotland. Now, we have a much better explanation from geology.

Or take a more recent example. In 1967, flashes of radio waves about once every second were detected coming from one point in the sky. The period of the pulses was precise to thirteen digits. No known astronomical phenomena was known to cause such a thing, but now we know these as pulsars.

What can be explained naturally changes with time, which limits the authority of these two tests.

We’ve spent our lives creating and perfecting bins labeled “hardback book,” “propeller-driven airplane,” “horror movie,” and countless more designed things. We also have bins for natural things—“green crystal,” “odd-shaped cloud,” or “pretty rock.” This is the principle of analogy, and if an object fits nicely into one of these bins, we can assume that it’s designed or natural according to how we’ve assigned the other members of the bin.

(Aside: it’s odd to see the principle of analogy in a list made by a Christian, when it devastates Christianity by showing how analogous it is to other manmade religions.)

But this is the easy part. The key to making this eight-point list a valuable tool would be for it to accurately differentiate things that fail both the “it looks natural” test (1a or 1b) and the “it looks designed” test (2).

In the previous post, Wallace used a garotte as an example, but this already gets an emphatic Yes on test 2. Later, he tossed out another example: a bird’s nest. Yet again, we know that nests are designed. The list must perform well on the hard cases—those things that look neither like a known natural thing or a known designed thing.

What do these words mean, exactly? We need an objective definition so that any unbiased person can reach roughly the same conclusion.

Here’s a test. Below are two objects; one is designed (made by a human artist), and one is natural. Give a “sophisticated and intricate” score to each, and decide which one was designed. 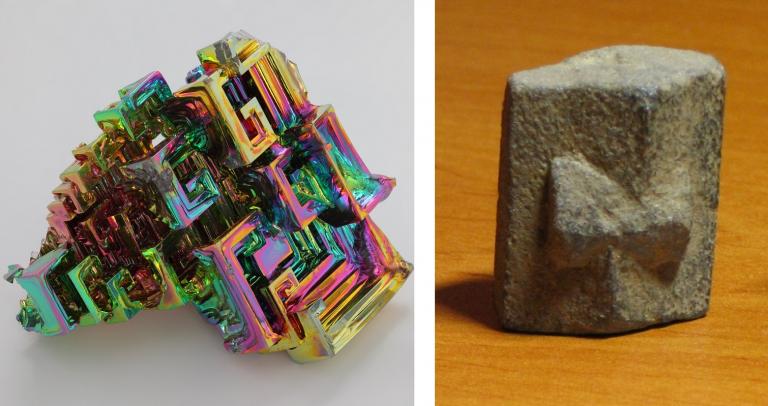 “Information” is a magic word within the Creationist community, because they say that information implies intelligence and DNA uses information, so therefore DNA comes from intelligence. As part of a general list created to separate designed from natural, however, it doesn’t really belong. The bird nest doesn’t use information, nor would a mortar and pestle or a mud sculpture.

As with the previous test, we need clear definitions. What counts as information? The CPU that runs your computer contains microcode, so that would presumably count. There is actual information in the CPU. But it’s not clear what other examples would count. Even if DNA counts as information based (or the bacteria flagellar motor, which is built using DNA), DNA is clearly not the product of a perfect Designer (about which, more later).

5a. Goal directed + 5b. A choice between alternatives

If the universe were designed by God, then everything we see came from a Designer (even if indirectly). But if these tests are to be useful at all, they must reject a reasonable number of candidates. So 5a is useless if it means, “It pleased God for X to exist, so therefore it does,” regardless of what X is.

Evolution doesn’t have goals, but we can still say that wings are for flying. Does that mean that wings are goal directed? The earth’s geology doesn’t have goals, but even here we can say that, from the standpoint of understanding plate tectonics, the role of the Mid-Atlantic Ridge is to separate tectonic plates on the west from those in the east. Does that mean that this ridge is goal directed?

Creationists love, love, lu-u-uv this one. The punch line of Wallace’s overall argument is, “and that’s why the bacteria flagellar motor must be designed; therefore, evolution can’t explain it; therefore, evolution fails and Intelligent Design wins.” And why must the flagellar motor be designed? Because it’s irreducibly complex, which means that if you remove any single protein from it, it fails. In other words, since evolution makes progress through mutations that make small steps, there is no possible prior step for the motor since each of these potential precursors is broken.

Next time, we’ll continue our discussion of the flagellum and respond to the claim that it must’ve popped into existence fully formed.

I applaud the general goal. An unbiased tool that would be more reliable than just one’s gut feeling in separating natural from designed is an interesting project. But to do that, the checklist needs to be reliable. It needs to be road tested with long lists of things known to be natural and things known to be designed. It should be quantitative, with a numeric score for each attribute, and it must be objective, with each step unambiguous, so that different people will reach roughly the same conclusion. Most importantly, it must be tested with things in the gray area—things that are known to be designed but look rather natural and vice versa, and even things people can’t agree on. As far as I can tell, Wallace has done none of this. This is just a back-of-the-envelope list.

* I lied—both of these examples are natural. In fact, they’re both crystals—pure bismuth on the left and staurolite (“fairy stone”) on the right.

I’d call the bismuth crystal highly sophisticated and intricate (I’d score it 7 out of 10) and the staurolite less so (4 out of 10), but feel free to argue for other scores. The point is that not only are these terms imprecisely defined, but natural and designed objects will overlap on this metric. For example, I’d give manmade (that is, designed) objects like a handmade mortar and pestle or a sculpture made from mud a much lower score than the bismuth or other intricate crystal.

Continue with: How Useful is the Bacterial Flagellum for the Creationist?

It takes a certain maturity of mind
to accept that nature works as steadily in rust
as in rose petals.
— Esther Warner Dendel

July 27, 2020 How Useful is the Bacterial Flagellum for the Creationist?
Recent Comments
0 | Leave a Comment
Browse Our Archives
get the latest from
Cross Examined
Sign up for our newsletter
POPULAR AT PATHEOS Nonreligious
1