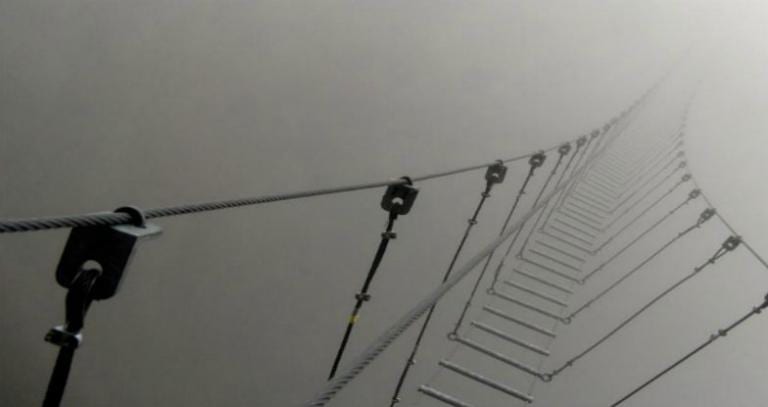 What does faith mean? Does it mean belief firmly grounded in evidence? That’s the definition in vogue among many conservative apologists (and discussed in part 1). But there’s another definition that is also popular.

If you have any familiarity with Christianity, you know that this definition doesn’t cover the spectrum. “Faith” is sometimes defined to have a very different relationship with evidence.

Faith definition 2: belief held not primarily because of evidence and little shaken in the face of contrary evidence; that is, belief neither supported nor undercut by evidence. This would be a belief that can’t be shaken by a change in evidence (such as, “I won’t give up my faith in Jesus for any reason”). Evidence for one’s belief can be nonexistent, or it can actually oppose one’s belief (as in blind faith), or evidence can simply be insufficient to firmly ground the belief.

Again, let’s start with the Bible to find support for this evidence-less faith:

Now faith is being sure of what we hope for and certain of what we do not see. . . . And without faith it is impossible to please God, because anyone who comes to Him must believe that He exists and that He rewards those who earnestly seek Him (Hebrews 11:1–6).

Then Jesus told [Doubting Thomas], “You believe because you have seen me. Blessed are those who believe without seeing me.” (John 20:29)

The Hebrews passage has no need of evidence, and the statement of Jesus celebrates those who believe despite a lack of evidence.

Let’s check in with some early church fathers.

If you chance upon anything [in Scripture] that does not seem to be true, you must not conclude that the sacred writer made a mistake; rather your attitude should be: the manuscript is faulty, or the version is not accurate, or you yourself do not understand the matter. (Augustine)

Now consider some modern sources. Kurt Wise has a PhD in geology from Harvard, and yet he’s a young-earth Creationist. In high school he used scissors to cut from a Bible everything that science concluded couldn’t be interpreted literally. He said about the resulting corrected Bible, “I found it impossible to pick up the Bible without it being rent in two.”

But his definition of faith doesn’t follow the evidence:

William Lane Craig’s gullible acceptance of magic rather than evidence as the ultimate authority is equally disturbing:

Should a conflict arise between the witness of the Holy Spirit to the fundamental truth of the Christian faith and beliefs based on argument and evidence, then it is the former which must take precedence over the latter, not vice versa. (Reasonable Faith [Crossway, 1994] p. 36)

We can see both definitions of “faith” in Geisler and Turek’s I Don’t Have Enough Faith to Be an Atheist. In part 1, we saw how they celebrate evidence when they think they have it. But the very title of their book denigrates “faith” as a leap unsupported by evidence. They say:

Richard Dawkins once challenged Kenneth Miller’s justification for holding some religious belief (both men are biologists, but Miller is Catholic). Miller replied, “There’s a reason it’s called faith!” (rather than “certainty”).

Finally, consider a faith that has real-world consequences. Though religion wasn’t involved, it seems faith rather than physics guided a hot-coal-walking exercise put on by motivational speaker Tony Robbins in 2012. Twenty-one people were treated for burns.

Snake handlers believe that Jesus said about them, “In my name . . . they will pick up snakes with their hands; and when they drink deadly poison, it will not hurt them at all” (Mark 16:17–18) despite the very clear evidence to the contrary. Pastor Mark Wolford died from a snakebite in 2012, and he had watched his father die from the same thing. Pastor Jamie Coots refused medical treatment for a snakebite in 2014 and also died. If anyone knew that God doesn’t protect believers from snakebite it was him, since that was his ninth snakebite.

Christian scholars grope around as they try to justify belief without evidence.

John Warwick Montgomery suggests crossing a busy street as a parallel. You never have absolute certainty of your safety when you cross a street. Instead, you wait until you have sufficient confidence, then you cross. And then, you don’t just take 99 percent of yourself across (to match your degree of confidence in the safety of the trip); you take all of yourself. Faith jumps the gap, both for busy streets and for Jesus.

Nope. Neither example makes the Christian case. Crossing a street is always based on evidence. You look for good evidence that it’s safe, and you reconsider your conclusion if new evidence comes in. You also weigh evidence in the search for a compatible mate. In the same way, we follow the evidence for the reliability of the Bible as well—and find very little, not enough to support its enormous claims.

Is there a reason to believe that there’s an even number of stars? No. An odd number? No. What about God—is there reason to think that he exists? No. That he doesn’t? Yes! You can throw up your hands in the case of the number of stars because it’s impossible to answer—agnosticism (or, more likely, apathy) is an appropriate response. But the data is in for God, and that hypothesis fails for lack of evidence, just like the leprechaun and Zeus hypotheses. (More on Plantinga’s number-of-stars puzzle here.)

Anselm said, “I believe to understand,” but that won’t work for me. If God exists, he gave me this big brain to use. It would be impolite to ignore its objections or be a Stepford wife. If God exists, he’d be happy to see me challenging empty Christian claims.

Pick a definition and stick with it

Lots of words in English have multiple definitions, even opposite definitions. Dust means to clean up dust (wiping with a cloth) or to add in a dust-like manner (dusting a cake with powdered sugar). Screen means to broadcast for everyone to see (a TV station screens a program) or to conceal (screening the baby from the sun). Cleave can mean to cling to or to split.

And as we’ve seen, faith also has two opposite definitions: belief well grounded in evidence (“I have faith that the sun will rise tomorrow”) or belief uninterested in evidence (believing as your heart speaks to you). Using the latter definition, Christians might speak with unjustified confidence about what heaven is like and who’s going there, what message God sent with a recent disaster, who’s on God’s naughty list, and so on.

Each word has its place. Be consistent. Sloppy usage only confuses your message and yourself.

Continue: How Reliable Is a Bridge Built on Faith?

Faith and science are two methods humans use
to learn about the world around them.
One works, one doesn’t.
— seen on the internet