Arguments for the reliability of the New Testament are built as a chain of claims—the reliability of oral history, the short duration between events and documentation, the large number of Greek copies, and so on. We’ll look at one of these links, the time from original authorship to our best copies, to see how well it stands up.

Where the data came from

Making a spreadsheet of the time gap for every chapter in every book in the Bible was a tedious task, though not a difficult one. The oldest manuscript with a complete New Testament is the Codex Sinaiticus, written in about 350 CE. For 57 of the New Testament’s 260 chapters (22 percent) this was the oldest source, but the remainder have papyrus copies that are older. These papyri vary in size. For example, P46 contains more than eight epistles (letters), while P52 has just a few verses of John 18. (“P46” is papyrus number 46, and so on.)

That gave an oldest date for each chapter, and this list has the date of authorship for each book (from the 50s for Paul’s authentic epistles to 90 and beyond for John, Revelation, and some of the epistles). Subtract the two to get the time gap from authorship to oldest copy for each chapter.

The chart above shows the gospel chapters in order for Matthew, Mark, Luke, and John. The red bars indicate the first chapter in each book. The height of each bar is the time gap from the original to our best copy for that chapter.

Matthew and John each have 18 papyrus sources, Luke has 6, and Mark only 2. Though Mark is thought to be the oldest gospel, scholars have speculated that once churches had Matthew and Luke (which were basically second editions of Mark), Mark lost its value and wasn’t copied as much by the early church.

The time gaps for the chapters in John look pretty good compared to the others because it was the last gospel to be written and because papyrus P66, dated to 200 CE, is a complete copy. P52 (written as early as 125 CE though probably later) has bits of John 18, and P90 (late second century) has bits of John 19.

Two papyri dated to 200 CE cover most of Luke. Nevertheless, 22 of these 89 gospel chapters have no papyrus copies that improve on the Codex Sinaiticus (350 CE). This problem is particularly obvious in Matthew, where it must rely on Sinaiticus for 43 percent of its oldest chapters. The average chapter time gap for Matthew is 200 years, making it particularly unreliable. Mark is even worse, at 230 years.

The height of each bar is the length of the dark period during which no one knows for sure what happened to the content of these books. We have enough data to repair some errors, but we don’t know how many errors remain and how bad they are. How much confidence can we have in a copy written centuries later than the original?

You wouldn’t believe a supernatural story if it was claimed to have happened yesterday, but with the gospels we have supernatural stories about Jesus passed on as oral history for decades. They were then written, but we don’t have the originals but only copies from centuries later.

A note how the dates are chosen: if a chapter’s oldest copy holds just a fragment of one verse, that’s enough to assign that copy’s date as the oldest for that chapter. Since most of the earliest papyrus collections are made of pages that are each fragmentary, this is a generous concession in favor of the Bible. 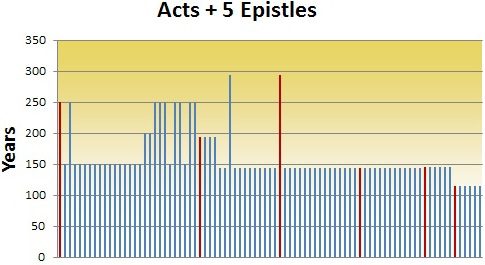 (Remember that red columns are chapter 1.)

Acts and Romans both have a decent number of papyrus sources (8 and 7, respectively), but continuing down the list, it’s 4 sources, then 1, 1, and 3. Fortunately for these epistles, they are mostly in P46, which is dated to 200 CE.

Ephesians (the last six chapters on the right) looks unusually good, but that’s only because it’s a pseudo-Pauline epistle, one that falsely claims to have been written by Paul but was actually written about 30 years later than Paul’s actual epistles. 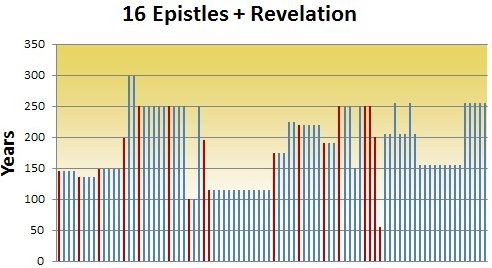 All the rest: Philippians, Colossians, 1 and 2 Thessalonians, 1 and 2 Timothy, Titus, Philemon, Hebrews, James, 1 and 2 Peter, 1–3 John, Jude, and Revelation

The one-chapter books stand out here.

Hebrews (thirteen chapters, each 115 years tall, near the center) has 8 papyrus sources, including the excellent P46. Revelation has five sources, mostly poor. The remainder have three or fewer sources, and four books have zero sources and must be completely backstopped by Codex Sinaiticus.

If the Bible and my brain
are both the work of the same infinite god,
whose fault is it that the book and my brain
do not agree?
— Robert G. Ingersoll

February 15, 2021
Tolerating Hell While in Heaven: 4 Lessons
Next Post