When it’s a single fertilized human egg cell at day one, just 100 microns across, it’s not much of a baby, but who can begrudge a couple calling it whatever they want?

So let’s say it’s a “baby” right back to day one—that’s a popular Christian conclusion. Babies must be protected. Everyone has a right to safety, and babies are vulnerable and deserve particular attention. Our natural instincts to protect cute big-eyed things come into play—who could complain about that?

The simplest moral logic would demand that these babies be protected, and it isn’t surprising that millions of American voters are single issue voters, declaring that it’s a baby right back to day one. Does the conservative candidate say that they’re going to fight to protect those lives and the liberal candidate not? With Supreme Court appointments in play for the future president, that makes it easy—you vote for the conservative even if you must hold your nose to do so.

Where does it end?

That first step is like a drop of rain falling at the crest of a mountain range that is carried downhill by a stream and then a river. If it falls a little this way, it flows westward. A little that way, and it flows eastward. A small change makes a big difference.

And the small change in our example of pregnancy is that definition of “baby.” You say that it’s a “baby” on day one, and you flow inevitably to cute, then vulnerable, then protective instincts, then society must protect it, then government must protect it, … and then voting for Donald Trump.

But maybe you don’t need to start with that. Let’s make a small change. What if you said that as a newborn in your arms at the hospital, that’s a baby. The five-month-old fetus that begins to kick? It’s not really a baby if it hasn’t developed enough to be viable on its own. The three-month-old fetus with eyes and fingers? That’s even less of a baby—it’s just two inches long, not very baby-like, and nowhere near able to live on its own. 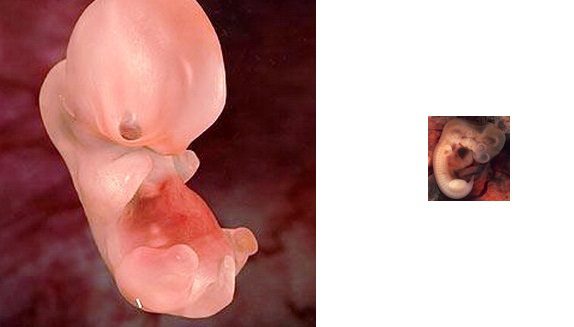 On the left is a three-month-old fetus. Think that that’s an adorable baby that must be protected by law? Guess again. On the right is a five-week-old embryo that’s less than half-an-inch long and looks like that thing from the Alien movies.

You see the progression. When you go back in time from a trillion-cell newborn to a single cell, it becomes less of a baby at each step as you regress along that spectrum. When you go from a newborn with arms and legs, eyes and ears, brain and nervous system, heart and circulatory system, and all the rest back to where there isn’t even a single cell of any of these, it becomes not a baby at all. (More here.)

A pregnant woman can call her fetus anything she wants. The problem is when someone wants to impose their own definition of “baby” onto the rest of the country by law. You say the cell is a baby? You say you’d never have an abortion? That’s fine, just don’t force that on the rest of us. And consider the political consequences when you demand that a single cell is a “baby.”

I do not believe that just because
you’re opposed to abortion
that that makes you pro-life.
In fact, I think in many cases,
your morality is deeply lacking . . .
if all you want is a child born but not a child fed,
not a child educated, not a child housed.
And why would I think that you don’t?
Because you don’t want any tax money to go there.
That’s not pro-life. That’s pro-birth.
We need a much broader conversation
on what the morality of pro-life is.
— Sister Joan Chittister

June 7, 2021 Revisiting the Kalam Cosmological Argument
Recent Comments
0 | Leave a Comment
Browse Our Archives
get the latest from
Cross Examined
Sign up for our newsletter
POPULAR AT PATHEOS Nonreligious
1