This is yet one more stupid argument Christians should avoid (with a bonus argument). The list begins here.

Stupid argument #43: For the benefit of the Little People, don’t take away their God

This isn’t an argument that Christians make but I think it’s worth highlighting. The Little People Argument is made by atheists and agnostics against fellow atheists. These more generous atheists scold the cranky atheists for taking God away from ordinary people. They don’t need God themselves, they assure us, but we mustn’t ruin things for the people who aren’t as smart or stable as we are.

They say that there’s more to a religious claim than just its truth. If believers get benefits from their belief, and their belief is grounded on the (false) claim that it’s true, why rock their boat?

Christianity’s reckless activity within society is why. Remember the problems listed in argument #42—Christians pushing for Creationism in schools and prayer in public meetings, Christianity softening one’s inherent skepticism for nutty ideas so that QAnon and other conspiracy theories can come aboard, and so on.

Politicians sometimes abduct Christian thinking for their own purposes, demanding that good Christians must vote for them to end the godless scourge of abortion, vaccines, girls kissing girls, or whatever is causing the sky to fall today. For giving these “Baby Jesus will cry” arguments power, Christianity takes the blame.

One variant on the argument is to demand that you not undercut Christianity without something to replace it. Sure, if a philosophy group or lecture series satisfies an intellectual hunger that before had to put up with the thin soup of a sermon, that’s great. But such a replacement isn’t mandatory. Jerry Coyne, whose article was my inspiration for this argument, gives a counterexample: did the U.S. Civil Rights movement of the 1950s and 60s offer something to replace the idea that whites were superior to blacks? Nope. If the realization that they weren’t inherently superior to someone else caused someone existential heartburn, they had to get over it. Nothing replaced the false belief. Northern Europe is far ahead of us in sidelining Christianity, and they seem to have muddled through just fine.

Another example: when you’re cured of cancer or malaria, doctors don’t replace that disease with something else; they make you well and send you on your way.

I’ll end with a caveat. I have little enthusiasm for debunking the supernatural beliefs of someone whose awful life is made a little easier with those beliefs. Perhaps they’re abused, starving, or dying, and (false) beliefs help them get through the day. The good might outweigh the bad in these cases. For the rest of humanity, let’s believe as many true things and reject as many false things as possible.

And now, it’s time for a bonus argument! Let’s call the previous argument #43a so that this related argument can be called:

Stupid argument #43b: Religion is useful

Yes, religion can be useful. In placebo fashion, it might help people kick bad habits like addiction. It might encourage people to act better because they imagine God is taking notes. It might push people to donate time or money to good works.

And of course I’m happy to see Christianity’s benefits extracted from its many false claims. Community, charity, and an interest in morality are great, and they needn’t be encumbered with Christianity’s baggage.

Note, though, that this does nothing to show that religions’ fundamental supernatural claims are true. Truth is the bottom line at this blog, and failing at that is what makes this a stupid argument.

Returning to “religion is useful,” here’s a thought experiment: suppose religion were so useful that it was a net positive. That is, the upsides (hope for heaven, the belief that God’s plan is all for the best, and related beliefs) outweighed the downsides (the harm caused by those beliefs being false plus other negatives, discussed in argument #42). Should we reject religion then?

I’ll let you answer that one for yourself. As for me, the downsides of religion far outweigh the upsides, so the question is academic.

Is there any way to get to a harmless Christianity? Consider that there are secular Jews who self-identify as Jews. There are atheist Jews who attend synagogue. They see themselves as cultural Jews. Imagine the Christian equivalent—a community of cultural Christians who might have supernatural beliefs (or might not) and are brought together for community and doing good within their society. I think of this as Christianity 2.0, and it might be Christianity’s soft landing option.

I don’t agree with C. S. Lewis on much, but he had a good point when he said,

If religion is useful, let’s acknowledge that and try to understand why. But that shouldn’t hamper efforts to get everyone to agree on what’s true.

Don’t touch the fruit of the tree of historical knowledge
lest it open your eyes to the hooey that the Church professes.
— commenter Sophia Sadek 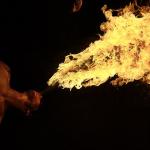 September 30, 2021 Movie Review: “Is Genesis History?”
Recent Comments
0 | Leave a Comment
Browse Our Archives
get the latest updates from
Cross Examined
and the Patheos
Nonreligious
Channel
POPULAR AT PATHEOS Nonreligious
1