Has evolution breathed its last?

This is the conclusion of a critique of a Greg Koukl podcast about the death of evolution (part 1 here). Since some Christians refuse to stop embarrassing themselves with this stupid argument, I will continue to see it as a civic duty to laugh at them.

The problems with evolution

After much overconfident bluster about why evolution has breathed its last, Koukl finally gives the three reasons supporting this conclusion.

Insurmountable? Write your paper detailing the proof and collect your Nobel Prize. (True, there is no Nobel Prize in Biology, yet, but I’m sure that will change once Koukl documents his breakthrough.)

What will you do if a consensus view for abiogenesis does develop over the next decade or so? Let me guess: you’ll not apologize, you’ll sweep under the rug the fact that you backed the wrong horse, you’ll hope that no one remembers, and you’ll stumble forward grasping for some new as-yet-unanswered question within science, learning absolutely nothing from the experience.

2. Cambrian Explosion. Koukl focuses on the basics, which is that he doesn’t like evolution and thinks that the Cambrian Explosion is fatal to it. He’s not so good on details like when it happened (he’s off by about a factor of six; in fact, it began roughly 541 million years ago and lasted for 20–25 million years).

The big deal about the Cambrian Explosion is that most of the 30-some animal phyla (the top-level category, which defines the basic body plans) appear for the first time in the fossil record in this relatively brief period.

How damaging is the Cambrian Explosion to evolution?

Here are some reasons why this rapid emergence of phyla isn’t a nail in evolution’s coffin. 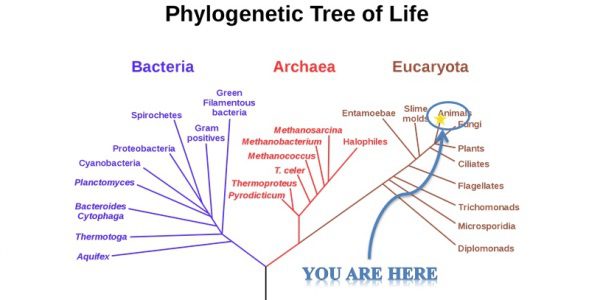 Epigenetics and other new developments

3. Genes don’t explain everything. Mutation of DNA is a key part of evolution, but DNA only codes for protein. That’s only part of the picture, Koukl tells us—how do you get the body? That requires epigenetics. That’s not in the genes. “Now, they’re working on it, trying to figure it out, but if it’s not in the genes, if the genes aren’t doing the work, then natural selection doesn’t do its work on genetic mutations, then that is neo-Darwinism, and it’s dead” (22:10).

I’m not sure what Koukl is getting at. Embryology is fairly well understood, and we can see a single cell develop according to the body plan defined in its DNA. Magic isn’t necessary. And, yes, epigenetics is a new and exciting aspect of genetics. There is much to be learned. But a naturalistic explanation remains the best explanation. If evolution is changing, well, that’s just what science does as it adapts to new facts.

Taking a step back, I see several problems. One is the unstated idea that if evolution can be defeated, Creationism will step in to take its place as the explanation of why life is the way it is. Nope—Creationism can only replace evolution when the evidence shows that it can better explain the facts. All the facts.

Scientific theories stand on their own merits, not on the failure of other theories. Or, if I could use a schoolyard analogy that might be more in Creationists’ wheelhouse: tattling on someone who’s misbehaving in class doesn’t improve your grade.

That Koukl is talking to the public and not to scientists reveals both his agenda and his impotence. He’s got PR, not evidence.

The other problem is that this entire tantrum seems to be semantic. His agenda seems to be finding a loophole so that you can’t call it “the neo-Darwinian Project” anymore (ignoring the fact that no one worth listening to calls it that).

In Koukl’s wildest dreams, biology would develop in radical new ways so that evolution taught twenty years ago, say, will be seen as inadequate or incomplete in important ways. But how does that help? Once Koukl’s smoke screen clears, the naturalistic discipline that explains how life developed on earth (whatever you want to call it) is still there, with no role for God to play.

I’ve written about two related issues, the Rube Goldberg appearance of life (rather than appearance of design) and the question of information in DNA.

Koukl next brings up atheist philosopher Thomas Nagel, who says that evolution won’t allow for consciousness.

This is yet another question that might get answered, as tends to happen with scientific puzzles. Koukl’s argument is nothing more than: Science has unanswered questions; therefore, God. Again, he forgets that a weakness in science (I see no weakness here, but let’s pretend there is) does nothing to support the God argument. Such an argument must stand on its own.

He concludes by ticking off the unanswered questions—abiogenesis, the Cambrian Explosion, and the evolution of consciousness—and concludes, “Incidentally, these are no problem whatsoever for our point of view.”

Yeah—“God did it” explains everything. Of course, you’ve given us no good evidence for the God side of the question, but never mind. The real problem is that “God did it” is unfalsifiable. You could apply it to anything, and I couldn’t prove you wrong. Therefore, it’s useless. By explaining everything, it explains nothing. Scientific theories must be falsifiable.

Koukl’s argument reminds me of Michael Denton’s 1986 book Evolution: A Theory in Crisis. His 30th-anniversary edition was titled Evolution: Still a Theory in Crisis (emphasis added). Creationists keep predicting that evolution is dead, and it keeps not being dead. Perhaps there’s a lesson here that Creationists aren’t learning.

Popularizing consensus science is one thing (this is what I do sometimes), but rejecting it is another (this is what Koukl does, often). I put Creationists in with the anti-vaxxers.

See also: A Response to David Gelernter’s Attack on Evolution

The difference between a cult and a religion:
in a cult there is a person at the top who knows it’s a scam,
and in a religion that person is dead.
— seen on the internet

November 1, 2021 You know the photo that came with your new wallet? God is like that.
Recent Comments
0 | Leave a Comment
"Good point, but this dude isn't impressed by "lots of dead people." First things first."
Bob Seidensticker Is God the good guy or ..."
"Are you referring to the Great Orange Grifter Maggot, and loser. when you say that ..."
David Cromie Is God the good guy or ..."
"Creation Science's horizons are reached by standing on the toes of giants."
grasshopper Saving Haeckel: why “ontogeny recapitulates phylogeny” ..."
"There is, of course, the problem of 'long Covid' for some people."
David Cromie Is God the good guy or ..."
Browse Our Archives
get the latest updates from
Cross Examined
and the Patheos
Nonreligious
Channel
POPULAR AT PATHEOS Nonreligious
1