I’m in the middle of reviewing the young-earth Creationist movie Is Genesis History? (part 1 here). I must postpone my shocking conclusion (Is it history? Is it not? Stay tuned!) to pursue one of the movie’s arguments that needs a post of its own.

Paleontologists try to recover dinosaur fossils intact. The last thing they’d want to do is break a precious fossil bone. It’s just mineralized bone—what of interest could possibly be inside? Anyway, cells and proteins quickly degrade in time periods used to measure fossils.

Or do they? Paleontologist Mary Schweitzer published evidence in 1993 of biological molecules like collagen, a common protein in animals, found in Tyrannosaurus rex fossils. In 2005, she published more evidence, this time of soft tissue preservation. (Note that many fossil bones are completely mineralized. Collagen can only be found in undermineralized fossils—that is, fossils that are incompletely fossilized.)

Creationists jumped on this discovery. They don’t actually do science, of course, but they love to sift out the bits that can be spun to support their conclusion. Let’s look at their reaction to this discovery as we explore the science.

Shortly after the 2005 research, Ken Ham’s Answers in Genesis said,

The creationists now possess immensely powerful evidence against the well-publicized belief that dinosaurs lived millions of years ago and instead have tremendous support for the biblical timeline of a recent creation. Source.

These facts [about soft tissue in fossils] have been a thorn in [scientists’] side for several years now as they are incredibly difficult to explain within an evolutionary (millions of years) timeframe. Needless to say, they fit beautifully within a biblical (young earth) timescale; these are almost certainly the remains of creatures that were buried during the Genesis Flood, approximately 4,400 years ago. Source.

This isn’t a thorn; it’s a new discovery. New discoveries are a good thing, but science must make really, really sure that new ideas are solid before they are accepted.

And scientists did push back. One proposed explanation was that Schweitzer was seeing modern bacterial contamination rather than ancient dinosaur protein, but that has been rejected.

Answers in Genesis observed about Schweitzer: “Her first reaction was to question the evidence, not the paradigm,” as if she had been at fault for not immediately leaping to their young-earth conclusion. But questioning is what good scientists do. There might be many ways the result of an experiment could be misunderstood, so of course she questioned the conclusions. The result was a more solid conclusion.

There was the obligatory cackling in delight. I suppose that’s expected since Reality so often craps on Creationists.

Evolutionists like [Schweitzer] have been scrambling . . . to explain away this powerful evidence that dinosaurs have been around in relatively recent times. Source

The information that there are abundant amounts of soft tissue in creatures supposedly millions of years old is spiralling [sic] out of control. Evolutionists know that they need to confront this dinosaur soft tissue matter head on, and their responses to date have been far from convincing. Source

This is what someone looks like who’s determined to misunderstand the process of science.

What explains the soft tissue?

If paleontologists think that (1) dinosaur fossils are tens of millions of years and (2) organic material degrades in less time than that, the soft-tissue discovery means either that (1) the fossils aren’t that old or (gasp!) (2) the estimated rate of decay for organic molecules in fossils is wrong. Shocking though it seems, there’s a rather obvious alternative possibility than that the Creationists have been right all along.

The current conclusion is that iron is the key to the soft-tissue puzzle. After death, iron in the dinosaur blood is freed from the blood cells and forms free radicals, which then act like formaldehyde to cross-link the proteins. This cross-linking makes the protein stronger and resistant to decay.

One Creationist source sniffed that this iron explanation was an act of “desperation.”

It’s all about the PR

Creationists fight their battles with words, since they don’t have the science on their side. Sometimes they imagine that their opponents play the same game.

Such is the power of the evolutionary paradigm that many choose to believe the seemingly impossible rather than accept the obvious implication, that the samples are not as old as they say. Source

Ah, so it’s just a seductive worldview that blinds scientists to the obvious truth. And wouldn’t “We didn’t fully understand how protein degrades” be an even more obvious implication?

About the iron hypothesis:

It’s actually very strategic. By announcing this as ‘the answer’, evolutionists may catch creationists off-balance, lessening the impact of the argument. From now on [the average Joe] will likely not be surprised if he is presented with the facts of dinosaur soft tissue found in fossils, thinking evolutionary scientists have already explained this. The creationists are crazy to think dinosaurs died out recently! Source

Since Creationists start with their conclusion and select facts to support it rather than starting with the facts and following them to an honest conclusion, they imagine the same deviousness in their enemies. Here they lay out the playbook:

A world that made itself is basic to this religion [of secularism], and it absolutely, definitely needs millions of years. So instead, in the face of this evidence, the desperate search has continued—for some mechanism, even part-way plausible-seeming, to give this belief system some straws to clutch at. Source

Apparently biologists and paleontologists are in the same sad, evidence-denying boat as they are. It’s the world’s biggest conspiracy—tens of thousands of scientists know the truth but have pinkie-sworn to cover it up.

The Friendly Atheist summarized this issue a couple of years ago. He came across an article from Ken Ham’s Creation Museum. They had been given some dinosaur bones, and David Menton (PhD in cell biology; now a speaker and researcher for Answers in Genesis) planned on looking for organic material inside. The article concluded:

If Dr. Menton finds what he is looking for, you can count on a big write-up for Answers in Genesis in the near future!

In other words, we’ll report on the findings if and only if they support our conclusion. True to the mission of the museum—“Why God’s infallible Word, rather than man’s faulty assumptions, is the place to begin if we want to make sense of our world”—they have no use for evidence.

Unless they can find a bit that supports their view, in which case they’re all over it.

It’s the film version
of winning arguments in your head in the shower.
— comment in response to
the “God’s Not Dead” trailer

October 7, 2021
Noah vs. reality: where does the evidence point?
Next Post

October 14, 2021 A hail of flawed reasoning in our last look at "Is Genesis History?"
Recent Comments
0 | Leave a Comment
Browse Our Archives
get the latest updates from
Cross Examined
and the Patheos
Nonreligious
Channel
POPULAR AT PATHEOS Nonreligious
1 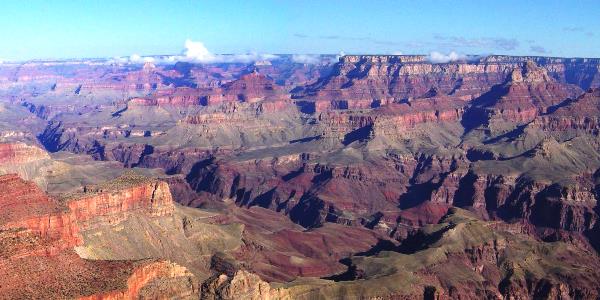