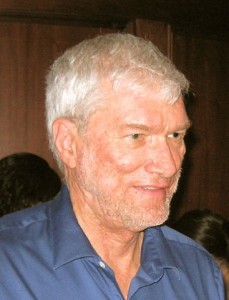 In a recent series of tweets, I called out Ken Ham’s Ark Encounter for the proposed $18 million in tax incentives the project applied for in an effort to help fund breaking ground on the long delayed project.

The Ark Encounter is an amusement styled park owned by Answers in Genesis, the same organization who runs The Creation Museum, and the park is based around the biblical myth of Noah’s Flood.

Ham plans to recreate the ark for tourists to walk through and learn how a 600-year old man built a giant boat that housed all the animal species in the world while God killed everyone else in a massive genocidal flood.

Yet my beef is not with their message, as they have the right to believe in whatever crazy foolishness they so please. My issue is with their purpose of avoiding paying while proselytizing to park visitors.

When one visits an amusement park, you do not expect that they will indeed try to convert you to one religion or another, or shove their beliefs down your throat. Any organization that wishes to do such business would be a church, not a for-profit amusement park.

Yet the Ark Encounter is not a church. They pitch themselves as a tourist attraction that will bring in millions of dollars in revenue to the state of Kentucky, but why should anyone believe this claim?

The Creation Museum does not accomplish this task and instead the museum barely manages to bring in guests at all and has long operated just above the red, so says City Beat Magazine in 2012:

Nearly 250,000 visitors is not a massive economy boost, to put that into perspective, the San Diego Zoo brings in nearly 5 million visitors a year. Of course, San Diego is a much nicer location for tourism, but one must not forget San Diego has its own creation museum and it brings in roughly 10,000 visitors annually, a rather large failure to the local economy.

So what proof do we have that Ham’s new attraction will bring any visitors at all? There seems to be very little public interest in the park and they have failed to garner the donations needed to build the attraction on their own.

So what does Ham have to say about all of this?

It started with this tweet from Ham in response to an MSNBC story on the Ark Encounter to which you can see my reply. 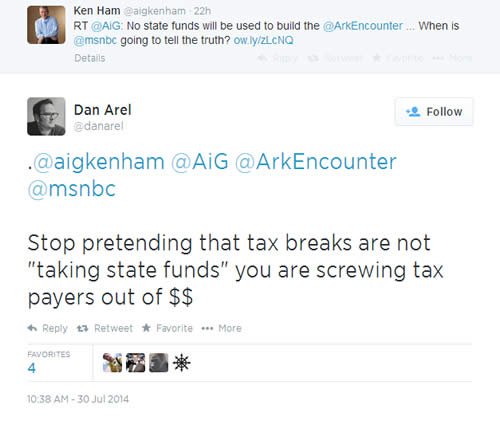 And Ham is correct; the state is not handing over $18 million to the project, at least not upfront. What Ham ignores is what he is not going to be paying the state $18 million dollars in taxes on profits the organization brings in.

Ham believes I am lying about the tax incentives though:

Yet I flat out asked him and he said my statement is untrue, yet then wont take the incentive application off the table. He sticks to “no taxpayer money” but that was never my claim, or my question. Why avoid the actual question Ken?

His own team said they could not break ground until they knew if they could get this tax incentive, so wouldn’t it reason that you do need this to make the project happen? So tell the taxpayers again why they wont see a massive influx of tax revenue from your attraction, yet you are not “taking” anything from them.

So Ham asked of me:

Interesting that he thinks I am against the state getting millions of more dollars while he has no issue pocketing $18 million. If he cares so much providing millions of dollars to the state, I know where he can start.

Now Ham wants to know why I am anti-employment, yet employment has never come up. Yet I wonder if we should be worried about employment, The Creation Museum runs the Careers page for the Ark Encounter and the page says that they require all applicants to submit a letter stating their belief in the creation myth, will the park allow anyone of any faith to work there?

So Ham states they will follow all the laws, yet their employment page says different. For a position that is being filled for the Ark Encounter for CAD Technical Designer, the job page says this:

Our work at Ark Encounter is not just a job, it is also a ministry. Our employees work together as a team to serve each other to produce the best solutions for our design requirements. Our purpose through the Ark Encounter is to serve and glorify the Lord with our God-given talents with the goal of edifying believers and evangelizing the lost.

How is this not a clear violation of an Equal Opportunity Employer and a clear violation of the separation of church and state? State tax incentives will be given to an organization with a clear message that they only hire those who are there to serve their lord “with the goal of edifying believers and evangelizing the lost.”

Ken Ham lied about following all the laws when it comes to hiring and they are already in clear violation of said laws for any for-profit business in the US.

Now Ham thinks I am applying what he calls a double standard to my thinking because I am not attacking the Kentucky Speedway for their tax incentive.

Well, lets look at that.

The Kentucky speedway is part of NASCAR, a multi-billion dollar industry and without question will bring in even more millions during races throughout the season and other events it hosts, but more importantly, when you enter the speedway, they will not be asking that you give their religious beliefs a try or cram any ancient mythology down your throat.

Ham also believes I am only biased because this is a Christian project, this is right and it is wrong. I don’t care what religion it is, the project is meant to proselytize to the public one particular religious belief and therefore is not eligible for special state or federal tax incentives. So I am biased that Ham is trying to use secular tax incentives to push his beliefs.

Ham says of the tax incentives:

The Kentucky Tourism Development Act states, “This landmark legislation, the first of its kind in the nation, provides a sales tax incentive program for tourism development projects.”

The Tourism Development Act is actually a brilliant move by the state of Kentucky to bring tourism dollars into the state.

The Act does not discriminate against a project just because it has a Christian purpose–and, of course, it would be wrong to do so under the Constitution of the United States.

Again, yes the Act would be wrong to discriminate based solely on the fact it is a religious organization, yet it would not be wrong to do so if the organization was planning to use the incentives to push a particular religious agenda on visitors, employees, etc.

Ham’s go to argument here is always to call evolution a religion and claim that secular museums are proof of the government funding religion. That would take an entire other blog post to explain to Ken that evolution is not a religion, but I think he knows this and is only pandering to his audience.

But this is what Ham misses about the whole project, if he wants to claim this entire park is not one big endorsement of the Christian Bible he would be a flat out liar. If he wants to claim this park is not being created for the sole purpose of proselytizing his beliefs, he would again be an outright liar. So I ask now, “Ken, is your parks purpose to educate the public about your religious belief in a Great Flood story?”

I’ll await his answer, but this park serves one purpose only, and don’t let Ham fool anyone into thinking it’s about tourism, state revenue or jobs, it is about his faith and his message.

He purposefully misrepresents my position against his foolish park as being anti-Christian, is it nothing but another attempt to play his persecution card, but the only card I am playing is the constitutional one that built the wall that separates church and state.

Ham had some advice about this post when he heard I was drafting it:

Yet again, the anti-Christian persecution card being played. Sorry Ken, but I am anti-Christianity exploiting tax dollars for it’s own benefit the same as I am for any religious organization. I am not anti-Christian because that would be purely xenophobic and would make as much sense as being anti-cancer-patients because I hate cancer.

So no, I am not anti-Christian, I know and love many Christians, in fact Ken, I would probably like you when we are not discussing religion, but that doesn’t mean I would be anymore sympathetic to Christians exploiting the American people for their own means.

I hope that Ken will continue this discussion and will admit that his projects purpose is to push his Christian faith and at least stop pretending it is anything else. He has invited me to visit him at the museum, a trip I hope to make one of these days and I have reached out and invited him as my special guest to Apostacon, to which the promoters have said they would give us a platform to sit down and discuss these differences. 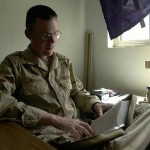 August 6, 2014
Should the US military be handing out Bibles at recruitment centers?
Next Post

August 7, 2014 The Theory of Everything movie trailer
Recent Comments
0 | Leave a Comment
"Tom Hughes --- Gee, you're clearly quite intelligent. I bet you're in Mensa. The MAJORITY ..."
markinator Clarification on the now viral Wisconsin ..."
"Source in the Constitution?Again, you have not replied to my argument about any "except for" ..."
Alonzo Donald Trump vowed to destroy the ..."
"Tom, I gave explicit instances when getting ID and registering to vote might be difficult. ..."
Annerdr Clarification on the now viral Wisconsin ..."
"You do realise that the only person we've seen throw the word nazi around is ..."
TheMarsCydonia The Danthropology blog is moving on
Browse Our Archives
get the latest from
Nonreligious
Sign up for our newsletter
POPULAR AT PATHEOS Nonreligious
1