Well this is going to hurt the Christian Right’s narrative a lot.

It seems American Adam Livix was arrested in Israel after authorities discovered his plot to blow up Islamic holy sites.

Livix is a 30 year-old evangelical from Texas who left the United States last year when he was sought for drug-related charges. He has resided in Israel since March 2013, apparently overstaying his tourist visa (his charges include being an undocumented resident).

Livix first lived in Hebron and Bethlehem, among West Bank Palestinians, claiming to be a Navy SEAL. Interestingly, Livix lived in the section of Hebron where Jewish extremists who likely killed Palestinian-American Alex Odeh once fled to. The Israeli security agency Shin Bet claimed that he was asked by Palestinian activists to be part of a plot to assassinate President Obama, but that he declined that offer (it isn’t clear who exactly it was who approached him about this earlier alleged plot, or if it even existed beyond conjecture).

While we are inundated with stories about Islamic terrorism, we forget that the majority of American terrorism is conducted by non-Muslims.

Well, it doesn’t get more clear cut than this. Christianity has terrorists, as do most other religions. Hitchens was right, religion does poison everything. 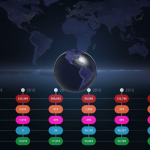 December 9, 2014
GOOD Magazine: The horrifying impact of anti-vaccination
Next Post

December 10, 2014 Ken Ham's Ark Encounter loses tax incentive
Recent Comments
0 | Leave a Comment
"Tom Hughes --- Gee, you're clearly quite intelligent. I bet you're in Mensa. The MAJORITY ..."
markinator Clarification on the now viral Wisconsin ..."
"Source in the Constitution?Again, you have not replied to my argument about any "except for" ..."
Alonzo Donald Trump vowed to destroy the ..."
"Tom, I gave explicit instances when getting ID and registering to vote might be difficult. ..."
Annerdr Clarification on the now viral Wisconsin ..."
"You do realise that the only person we've seen throw the word nazi around is ..."
TheMarsCydonia The Danthropology blog is moving on
Browse Our Archives
Related posts from Danthropology