According to the Courier-Journal the Kentucky Tourism, Arts and Heritage Cabinet has said the theme park has evolved into a ministry that seeks to advance religion and is discriminating against employees.

The organization denied any wrongdoing however, a stance hard to defend when the Ark Encounters own website says,

“The purpose of the Ark Encounter is to point people to the only means of salvation from sin, the Lord Jesus Christ, who also is the only God-appointed way to escape eternal destruction.”

Even the Governor of Kentucky who fully supported the project, and still hopes to see it completed realized it was a violation of federal laws to allow the tax incentives to go forward, saying:

American United for the Separation of Church and State is welcoming this decision as well,

“This project was never a good candidate for public funding,” said the Rev. Barry W. Lynn, executive director of Americans United. “Its purpose is to promote fundamentalist Christianity, and it should be funded with private contributions from believers.”

AU played a major role in leading the state to this decision in which they issued a letter to the Governor earlier this year requesting the tax incentives be reviewed.

Ham has said countless times that breaking ground and finishing this project was going to rely on receiving this 18 million dollar tax incentive, and now it is lost.

Answers in Genesis, who is pouring money into an ad campaign claiming his ship cannot be sunk may soon be eating their words unless they can drum up donors and investors to come up with the much needed money to finish his park. Something they have been unable to do up to this point.

This is a massive win for the separation of church and state and for secularism! 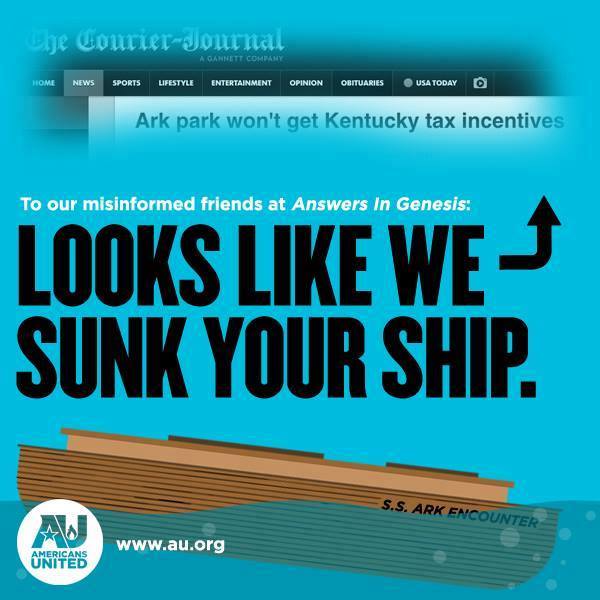 December 11, 2014 Ken Ham threatens to defend his right to discriminate in court
Recent Comments
0 | Leave a Comment
"Tom Hughes --- Gee, you're clearly quite intelligent. I bet you're in Mensa. The MAJORITY ..."
markinator Clarification on the now viral Wisconsin ..."
"Source in the Constitution?Again, you have not replied to my argument about any "except for" ..."
Alonzo Donald Trump vowed to destroy the ..."
"Tom, I gave explicit instances when getting ID and registering to vote might be difficult. ..."
Annerdr Clarification on the now viral Wisconsin ..."
"You do realise that the only person we've seen throw the word nazi around is ..."
TheMarsCydonia The Danthropology blog is moving on
Browse Our Archives
get the latest from
Nonreligious
Sign up for our newsletter
POPULAR AT PATHEOS Nonreligious
1