Speaking on the MSNBC morning talk show Morning Joe, former NBA star Kareem Adbul-Jabbar spoke about some of his recent comments about Islam and the attacks on Charlie Hebdo.

“Another horrendous act of terrorism has taken place and people like myself who are on media speed-dial under ‘Celebrity Muslims’ are thrust in the spotlight to angrily condemn, disavow, and explain—again—how these barbaric acts are in no way related to Islam,” Abdul-Jabbar, who converted to Islam in the late 1960s, wrote last month in a Time Magazine op-ed.

He commented that ISIS has nothing to do with Islam and focused on what he believes is their motivation; money and power. And yes, he is correct, those are two very big motivators for ISIS, but they are not the only ones.

“You can make parallels to things that have happened here in America. Like the Ku Klux Klan saying they are the Christian knights,” Abdul-Jabbar added later. “And they do not practice Christianity.”

This is were he seems to miss an important part. We don’t believe the KKK practice Christianity because we view the religion through much more moderate eyes, the kind of Christianity we see on TV or know of from our neighbors.

However, the KKK has plenty of justification for their horrendous actions and behavior from their holy book of choice, the Christian Bible, in the same way ISIS does. We cannot simply say since they don’t practice the more modern, moderate version many of us in the west are accustomed to see with our own eyes that they can have nothing to do with Islam.

This is exactly what religious extremism is, it is taking the holy books as the infallible word and attempting to follow them far too closely and finding they can so easily be used for justifying acts of terror or terrorism.

The same goes for ISIS. They highlight a problem that religion can cause, fundamentalism and extremism. If they can back up their actions with religious text, I have no reason to ignore their claims of being a religiously motivated organization.

February 16, 2015
I discussed the recent news around the Ark Encounter this weekend on Ask an Atheist
Next Post 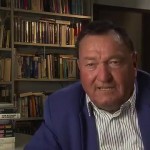 February 16, 2015 Von Daniken's Delusion: Ignoring the Known, Part 1
Recent Comments
0 | Leave a Comment
"Tom Hughes --- Gee, you're clearly quite intelligent. I bet you're in Mensa. The MAJORITY ..."
markinator Clarification on the now viral Wisconsin ..."
"Source in the Constitution?Again, you have not replied to my argument about any "except for" ..."
Alonzo Donald Trump vowed to destroy the ..."
"Tom, I gave explicit instances when getting ID and registering to vote might be difficult. ..."
Annerdr Clarification on the now viral Wisconsin ..."
"You do realise that the only person we've seen throw the word nazi around is ..."
TheMarsCydonia The Danthropology blog is moving on
Browse Our Archives
Follow Us!