Pope Francis, as much as he is hailed as a visionary new leader of the Catholic Church, sure does have this problem of revealing how conservative and old school he is, when it comes to social justice and progressive issues.

Very recently, he spoke out about families not having children and how it is a “selfish” choice not to have children. This also comes a few days after he discouraged followers to reproduce “like rabbits”. He stated that, a people that “views children above all as a worry, a burden, a risk, is a depressed society”.

He also quoted the Humanae Vitae, stating that birth control is discouraged (though 98% of Catholic women in birth giving years [age 15-44] have used, or continue to use, birth control), and that natural family planning (NFP) should be used.

Francis seems to be as well informed on these issues as his predecessors, as previous popes did things like promote the idea that condoms help spread HIV and AIDS when visiting sections of Africa where the disease is overwhelmingly present.

Not only that, but NFP is unreliable as well. Forget the fact that there is no contraception used at all in the process, but for women with irregular cycles are left, more or less, shooting in the dark if they attempt to utilize such a method. There is also a need for meticulous record keeping, for both partners, but contraception is recommended as a back up plan. Let’s not forget the prolonged periods of abstinence, which numerous studies have shown to be ineffective on multiple fronts.

In regards to families viewing children as a “worry, a burden, a risk…”, Pope Francis forgets, as many who advocate for pro-life positions, that there is at least one other life tied to having the child; the mother. Pregnancy, while certainly not unnatural, opens a large number of risks to the mother. Among those include UTIs, depression, gestational diabetes, and even severe maternal morbidity.

Let’s not ignore ectopic pregnancy, and even problems that can occur by taking medicine for a pre-existing condition, like epilepsy, that could cause harm to the fetus if taken, but harm the mother if not taken. This also does not take into consideration income, support, and other resources that may or may not be available to the mother when planning or becoming pregnant. No woman is the same when it comes to pregnancy and family planning, and it is ridiculous for Pope Francis to assume they are all cut from the same mold.

Lastly, Francis seems ignorant that two of the patriarchs of the faith he represents, Jesus of Nazareth and Paul of Tarsus, were unmarried men who had no children. Jesus, if we are to take the gospel accounts as valid (and it would be silly for someone like the Pope to not do so) was also very anti-family, as we see in Matthew 10:21, “…and the children shall rise up against their parents and cause them to be put to death.” Or in Matthew 19:10, where he agrees with the disciples that “it is not good to marry…” Paul tells his followers that he wishes they would be like him, namely unmarried and without children, but only to marry if they are “aflame with passion” (1 Corinthians 7:8-9).

In so many words, Pope Francis does not understand the human condition quite as well as people seem to think he does. Let alone the book of the very faith he represents. 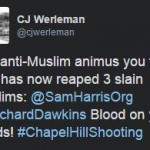 February 11, 2015
The new-atheist blame game has begun
Next Post 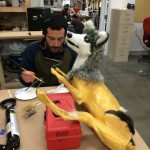 February 13, 2015 This is the amazing level of realism you can expect at the Ark Encounter
Recent Comments
0 | Leave a Comment
"Tom Hughes --- Gee, you're clearly quite intelligent. I bet you're in Mensa. The MAJORITY ..."
markinator Clarification on the now viral Wisconsin ..."
"Source in the Constitution?Again, you have not replied to my argument about any "except for" ..."
Alonzo Donald Trump vowed to destroy the ..."
"Tom, I gave explicit instances when getting ID and registering to vote might be difficult. ..."
Annerdr Clarification on the now viral Wisconsin ..."
"You do realise that the only person we've seen throw the word nazi around is ..."
TheMarsCydonia The Danthropology blog is moving on
Browse Our Archives
get the latest from
Nonreligious
Sign up for our newsletter
POPULAR AT PATHEOS Nonreligious
1