The new-atheist blame game has begun

Unfortunately it didn’t take long for “new atheists” to be at the forefront of blame for the Chapel Hill shooting that is making headline news this morning.

At this time we don’t know much about motivations, and as my fellow Danthropology blogger has pointed out, one thing we know for sure is, atheism itself is not to blame, and by simply blaming it, we do a disservice to the victims of this tragedy.

This has done little however to stop tweets from some anti-new-atheist writers to head right for their favorite scapegoats, Richard Dawkins and Sam Harris.

This (what may be a now deleted tweet – update, CJ did tell me he deleted this tweet almost immediately after posting it and does concede that he was wrong for posting it.): 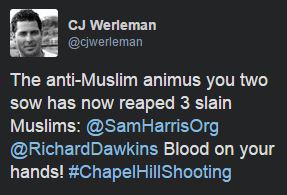 “Some propositions are so dangerous that it may even be ethical to kill people for believing them.” –@SamHarrisOrg #ChapelHillShooting

Both of these come from atheist critic CJ Werleman, who was quick to once again quote Sam Harris out of context on this issue, a tactic I attempted to correct him on via Twitter.

Of course, Harris has already wasted a great deal of time explaining this quote here, which is simply taken out of context from a bigger piece of text in his book The End of Faith, corrections of which is simply ignored by those with an agenda driven motive against Harris and the like.

But, as Harris points out, his quote, in context does nothing to support the kind of killings we say this morning, and neither Harris, or Dawkins, or Hitchens or any other “new atheist” has ever produced any kind of text that could lead Craig Hicks to condone such an atrocity.

I do believe it is possible that Hicks actions could have been driven by anti-religious motivations, but they may not have. His Facebook wall looks like your typical Facebook atheist full of memes and links to articles about the dangers of religion, but shows no signs of being a violent or hateful man.

It is just as possible his actions were driven by anger, rage or racism. All of these are possible scenarios and all issues that are worth addressing when we know more facts about the case.

Both Fox and CNN are claiming the incident was over a parking space,

The murder of three North Carolina college students was motivated by an ongoing dispute over a parking space, despite widespread speculation the victims were targeted by an avowed atheist because of their Muslim faith, police said.

While some are disputing this claim (based on a statement made by the father of 1 victim), and it is possible other factors could come to light, it is rather telling that through the fog and confusion that some would find it appropriate to blame Dawkins or Harris without a second thought.

Dawkins and Harris have no blood on their hands because their words and texts do not even once condone such an action, Harris quote that “Some propositions are so dangerous that it may even be ethical to kill people for believing them,” is not used out of context by atheists or Harris, but is pushed around by those wishing to demonize him.

A lack of a critics reading comprehension does not equate to blaming authors for a persons inability to comprehend complicated ideas. Harris and others should not shy away from saying provocative things if they are meant to push the limits of our thoughts and reason. Harris is expressing an idea, not pushing a doctrine and if shown the evidence to change his position, I have no reason to think he would not.

His statement, in full context only seeks to put actions against these Islamists into a context, as Harris said in his own words,

The larger context of this passage is a philosophical and psychological analysis of belief as an engine of behavior—and the link to behavior is the whole point of the discussion. Why would it be ethical to drop a bomb on the leaders of ISIS at this moment? Because of all the harm they’ve caused? No. Killing them will do nothing to alleviate that harm. It would be ethical to kill these men—once again, only if we couldn’t capture them—because of all the death and suffering they intend to cause in the future. Why do they intend this? Because of what they believe about infidels, apostates, women, paradise, prophecy, America, and so forth.

One can easily argue that dropping bombs on any country is wrong and that is an argument to be taken seriously when committing to military actions against anyone, but that does not deter from what Harris is saying or imply for even a second he is justifying the killing of anyone for simply being a Muslim. To claim he is doing so is nothing short of intellectual dishonesty.

If a person such as Hicks sees a meme or status update with that quote and believes that Harris is justifying his or her actions, than those who are purposefully spreading this misinformation have more blame on their hands than Harris ever would. 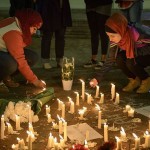 February 11, 2015
Atheism Did Not Kill Three Young Muslims in Chapel Hill
Next Post

February 13, 2015 Pope Francis on Childless Families
Recent Comments
0 | Leave a Comment
"Tom Hughes --- Gee, you're clearly quite intelligent. I bet you're in Mensa. The MAJORITY ..."
markinator Clarification on the now viral Wisconsin ..."
"Source in the Constitution?Again, you have not replied to my argument about any "except for" ..."
Alonzo Donald Trump vowed to destroy the ..."
"Tom, I gave explicit instances when getting ID and registering to vote might be difficult. ..."
Annerdr Clarification on the now viral Wisconsin ..."
"You do realise that the only person we've seen throw the word nazi around is ..."
TheMarsCydonia The Danthropology blog is moving on
Browse Our Archives
get the latest from
Nonreligious
Sign up for our newsletter
POPULAR AT PATHEOS Nonreligious
1