Did Bill Nye once support creationism on Bill Nye the Science Guy?

But don’t tell that to Ken Ham who insists that Nye did such a thing.

Okay, are you sitting down? Ken Ham wrote on his blog that,

Many of you will be aware of the television program Bill Nye the Science Guy, which made Bill Nye quite famous. In season 2, episode 1, on the topic of magnetism, Bill Nye includes a segment on the MRI scanner. In many of the Bill Nye video programs, he included a segment called “Way Cool Scientist,” which features a different scientist whose work is related to the topic of the episode.

Now in the episode on magnetism, Bill Nye features Ed Weinberger, a doctor who works with the MRI scanner.

This segment of course is meant to applaud this fantastic piece of technology. However, by doing this, Bill Nye is actually unwittingly praising the phenomenal achievement of a creation scientist—namely the inventor of the MRI scanner, Dr. Raymond Damadian.

Now, we are all used to Ham stretching the truth, or outright ignoring it, but this takes his delusion to a whole new level.

I most certainly hope that Ham has never thought about driving in a Volkswagen or drinking a can of Fanta soda, or one may mistake him for supporting Nazi Germany…

It should also be noted that Ham loves to tout Dr. Damadian as the inventor of the MRI machine, but his role in the discovery and project is suspect. He was denied a Nobel Prize for the invention, but two others on the team were awarded them. While some claim he was left out of the award because of his religious views, many believe it was due in part to the lack of evidence he played a prominent role in the research. 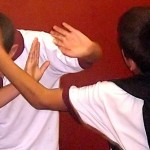 Michael Pearl's Confusing Take on Christianity & Updates...
I'm still reading through the July/August No Greater Joy magazine. The very...
view all Nonreligious blogs
What Are Your Thoughts?leave a comment
Copyright 2008-2020, Patheos. All rights reserved.