Can we put this idiotic quote mining nonsense to rest once and for all?

Time and time again the anti-new atheist brigade come marching out to smear the name of Ayaan Hirsi Ali by claiming that she has spoken out in defense of Anders Breivik, the mass murdering terrorist who killed 77 people in Norway in 2011.

The problem is, she didn’t once defend the killer and has many times spoken out against his heinous actions.

Here she explains her comments in an interview with Sam Harris,

Well, on the topic of Breivik, it goes without saying that I was horrified by his actions. He is one of the worst mass murderers in history, and there’s no question about that. Like most people, I had never heard of him before he went on his killing spree. However, he did write a thousand-page manifesto in which he quoted John Stuart Mill and other thinkers, and even me. Trying to use other people to justify your own actions is not unusual in mass murderers. Osama bin Laden quoted Noam Chomsky with approval. Does that make Chomsky in any way culpable for the behavior of bin Laden? Of course not. Just as no one quoted by Breivik is responsible for him.

In any case, I gave a speech at an award ceremony in Berlin, in the spring of 2012, on the shortcomings of policies based on the theory of “multiculturalism,” and I said that Breivik was one deeply unfortunate product of these policies, as are the rising number of European jihadis. They are unintended products, to be sure, because multiculturalism is all about good intentions.

My remarks in Berlin were a plea to lift the iron curtain of political correctness so that citizens can engage in politics through peaceful means and debate, and thus channel their frustrations with immigration and Islam through the system. This is elementary political science—but, of course, Islamists and their friends on the Left have twisted my words to make me sound like I was applauding an atrocity. Multiculturalist policies and political correctness make it easier for radical Muslims to preach, inspire, mobilize, and target immigrant communities on the grounds of religious freedom. And those who criticize them in Europe are silenced or branded as racist Islamophobes.

At what point in here does she condone or defend the killer?

Not once, and she didn’t in her original speech either,

Fourthly and finally, that one man who killed 77 people in Norway, because he fears that Europe will be overrun by Islam, may have cited the work of those who speak and write against political Islam in Europe and America – myself among them – but he does not say in his 1500 page manifesto that it was these people who inspired him to kill. He says very clearly that it was the advocates of silence. Because all outlets to express his views were censored, he says, he had no other choice but to use violence.

She notes that he says, not she says, but she is discussing how Breivik felt, that is not excusing nor condoning.

In fact, in the same speech she called Breivik’s actions both “abhorrent” and a form of “neo-fascism.” These don’t sound much like the words of someone who is defending a terrorist.

In reality, her speech sounds much like those she is criticizing on the faux-left who defend Islam against Islamists. The Glenn Greenwalds, Reza Aslans and CJ Werlemans of the world will tell you that Islamic extremism has nothing to do with Islam but is born out of bad foreign policy and American imperialism.

How is that justification for Islamic extremism and terrorism any different than Hirsi Ali saying that bad political policy and censorship drove Breivik to believe that violence was his only option. Hirsi Ali clearly doesn’t believe he should have used violence, and even notes that others,

Instead of violence, for now, these people preach apathy, distrust of the system, and “white flight.” But it is all too easy to see the progression from this type of thinking to violence, and that is a very dangerous place for society to be. Sadly, in extreme cases, until something changes, I think we should expect more violence.

So faux-liberals can easily justify and understand when Islamic extremists blow up a building or shoot up a magazine office and blame the victims or the government, but when a non-Muslim commits an act of terror and a vocal ex-Muslim explains why he may have committed such acts, she is condoning their actions.

Anti-atheist quote mining however, seems to be big business these days. 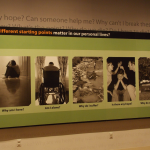 March 30, 2015 A Trip to the Creation Museum, Part Three: The Dangers of Disbelief
Recent Comments
0 | Leave a Comment
"Tom Hughes --- Gee, you're clearly quite intelligent. I bet you're in Mensa. The MAJORITY ..."
markinator Clarification on the now viral Wisconsin ..."
"Source in the Constitution?Again, you have not replied to my argument about any "except for" ..."
Alonzo Donald Trump vowed to destroy the ..."
"Tom, I gave explicit instances when getting ID and registering to vote might be difficult. ..."
Annerdr Clarification on the now viral Wisconsin ..."
"You do realise that the only person we've seen throw the word nazi around is ..."
TheMarsCydonia The Danthropology blog is moving on
Browse Our Archives
Related posts from Danthropology