Why is the media giving megaphones to anti-equality hate-groups?

Why is the media giving megaphones to anti-equality hate-groups? March 23, 2015 Thomas Essel

In my hometown of Springfield, Missouri, we will soon be voting on whether or not to repeal the Sexual Orientation and Gender Identity Anti-Discrimination ordinance – known locally as SOGI. There has been a back-and-forth in the media, mostly in the form of op-eds in the local paper. This local issue has got me thinking about a larger issue: why do we give a voice to those who advance prejudice?

When it comes to issues concerning black Americans, no media organization asks the opinion of the Ku Klux Klan for good reason. When it comes to racial equality, we are trying to build a civil society and the Klan’s opinions are antithetical to that goal. The position advanced by the KKK is the uncivilized drivel of barbarians. The media, and most people, simply ignore them – as they should. Yet, when it comes to issues like marriage equality or laws like SOGI, the media does the equivalent of asking the Ku Klux Klan their opinion on the troubles in Ferguson. Take Calvin Marrow, for instance, who wrote in the Springfield News-Leader:

“[I]n a decent society, it is assumed that people will follow the bathroom entry signs according to their God-given gender. The distinction is that the SOGI law guarantees protection to those entering and disrobing in opposite sex restrooms. This shocks the senses of decent people, is generally a perceived threat for most women and little kids, and enrages protective parents.”

I don’t think Marrow knows the first thing about decency. His way of thinking is so hostile to a civil society that it should have no place in the discussion on how to build it. Yet, there it is, presented in the local paper for thousands to read. I’m not saying that people like Marrow should be silenced. No, I think they should be free to expound their bigoted views on their own websites and blogs (here is Marrow’s). However, presenting such bigoted, ignorant views on an authoritative media outlet makes them appear as valid, rational positions to advance in civil discourse. The problem here are not the Calvin Marrows of the world, the problem are the editors that give them equal footing.

I am all for a balanced media. I think that the news has a civic duty to present reasonable debate. Unfortunately, the media is horrible at discerning reasonable objection from the pontificating of drooling idiots (I’m looking at you, Calvin Marrow). Not every opinion is worth listening to, not everyone has a good idea, and not everyone gets a trophy. Some people deserve to be marginalized for holding beliefs that are dangerous to the growth of a civil society.

In the age of Twitter and Facebook, where anyone can present their ideas to the world at the speed of light, the authoritative media outlets – from the local paper to major news networks – have the responsibility of sifting through the noise and granting legitimacy to specific voices. Any idiot can type up their opinion, but publishing that opinion grants it the authority of the publisher. Do the opinions of bigots like Calvin Marrow deserve the authority granted to them by respected media outlets? I don’t think so.

The danger in treating prejudice as a valid position manifests itself in Randy Cathcart’s opinion, also in the News-Leader. Cathcart supports the SOGI laws, but also implores his reader to “show compassion to those who fear it”. He writes:

“That everyone is afraid should be no surprise — a community formed from different people groups and backgrounds is inherently going to be scary. We all wonder if we will be okay. We all wonder if our goodwill will be reciprocated. We all have much to lose if things go wrong, and none of us have any guarantees. The key is what we do with our common fears.”

To conflate the fears of the LGBTQ community with the fears of the homophobic bigots who persecute them is like telling a racist, “Earl, I know you hate blacks, but they are just as afraid of you, so you are really the same.” No. The black people have to be afraid because Earl exists to begin with. Nobody in their right mind would treat the fears of black people and the hate of white supremacists as equivalent. Why do it with homophobes?

I understand Cathcart is trying to build bridges, but I do not feel the need to be the least bit conciliatory. In fact, his effort to build bridges is a wrong-headed approach that is a direct consequence of the media treating bigotry as a valid feeling. How many more Randy Cathcarts are out there impeding the march of progress?

Unfortunately, the media treats these bigots like spoiled three-year-olds. Mom and Dad, tired of hearing their tantrum, let them sit at the adult table, ruining everyone’s Thanksgiving meal. What they should have done – what we should do with homophobes – is send them to their room and tell them they can come out when they are ready to behave.

March 23, 2015
Ken Ham claims there are only two religions: 'For Christ' and 'Against Christ'
Next Post 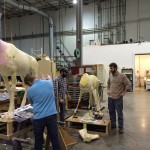 March 24, 2015 Ken Ham believes this is what giraffes looked like on the ark...
Recent Comments
0 | Leave a Comment
Browse Our Archives
get the latest from
Nonreligious
Sign up for our newsletter
POPULAR AT PATHEOS Nonreligious
1