AD is such a difficult series for me to follow anymore, let alone take seriously. Given how the producers had offered apologetics, rather than actual stories from the Bible, for the original Bible series from two years ago, it only makes sense that they would start showing episodes that they imagined themselves.

Like in every post I have made on the show, the episode preys on the audience’ uninformed ideas of history, politics, education, and government. It is apologetics disguised as informed history, but shows it does not even know the apologetics as put forward through the Bible.

In this episode, we see Pilate and Caiaphas, again. Pilate is not in the Bible after the passion narrative, and Caiaphas is not mentioned by name, though in some small parts reference is made to the “high priest”. Still, even if we can accept he was involved, like in the scene where Stephen is taken to be stoned, an actual event written in the Book of Acts, nowhere is there anything about Caiaphas coming forward to offer testimony for Pilate in front of the Roman emperor, like last nights episode showed. And why did no one else think it was strange that they brought Caiaphas in (“A jew?!” one of them exclaims), but they barely bat an eye at the fact that Herod Antipas, a Jew, is seated with them.

Even more bizarre is that, in one of the scenes with the Romans, they mention how terrible the insurrection was and how hard it was to maintain. This is absurd beyond the norm for this show to have the characters state anything of the sort. First, as I had stated from the beginning, if there were any individuals, let alone small groups, seriously thinking of starting an insurrectionist movement, chances are the crucifixions, if not a scare tactic, would have been used against them. As with Jesus’ followers, they would not hang around as that would run the risk of having them recognized and executed.

This also adds to the continued wishy-washy-ness of Pilate and Caiaphas; they frequently teeter between hatred and resentment of the group of followers from Jesus, to utter fear and worry. How did Caiaphas go from advocating for Jesus’ execution, to lying in his bath tub worrying about the repercussions of his actions, then back to vouching for Pilate? Let us also consider how he let the disciples go, thinking they preached the truth, to then allowing Paul…sorry, Saul, to persecute, imprison, and even murder the followers? Pilate shows an equally uncertain position; going back and forth between being violently defensive of his actions, to then showing fear and concern over his actions in various places, including during his little “trial” in front of the Roman emperor.

Despite the inconsistent positions of those who arranged Jesus’ death and the management of the “insurrection”, these are all instances of things having never happened either historically or even in the historical fiction (if one can consider it that) of the Bible.

And remember last post, when I said the appearance of Jesus would happen soon? Yeah, that did not happen at all this episode. Maybe next episode, or maybe Marty McFly will show up. 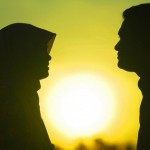 May 16, 2015
Maryam’s Story: A Glimpse Inside the "Modern" Middle East
Next Post 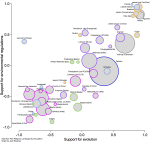 May 18, 2015 New chart shows church member's acceptance of evolution and climate change
Recent Comments
0 | Leave a Comment
"Tom Hughes --- Gee, you're clearly quite intelligent. I bet you're in Mensa. The MAJORITY ..."
markinator Clarification on the now viral Wisconsin ..."
"Source in the Constitution?Again, you have not replied to my argument about any "except for" ..."
Alonzo Donald Trump vowed to destroy the ..."
"Tom, I gave explicit instances when getting ID and registering to vote might be difficult. ..."
Annerdr Clarification on the now viral Wisconsin ..."
"You do realise that the only person we've seen throw the word nazi around is ..."
TheMarsCydonia The Danthropology blog is moving on
Browse Our Archives
get the latest from
Nonreligious
Sign up for our newsletter
POPULAR AT PATHEOS Nonreligious
1