We are five episodes deep into the AD series on TV. There is very little I need to say about this episode, as all four previous posts I have made demonstrate the huge issues this series has. However, we still have a few things to talk about.

For starters, about 90% of the episode is fiction beyond the fiction that the Bible has. In other words, what the episode is made up of is not even included in the Bible. At least not entirely.

For what is included in the Bible, like the imprisonment of the disciples (in Acts [12] it is only Peter that is jailed), an angel comes, their chains fall, and their cell opened. This is almost a direct plagiarism, from the author of Luke-Acts, from the Bacchae, written in the fifth century BCE. Lines 447-8 read,

The chains on their legs snap apart …untouched by any human hand, the doors swing wide, opening of their own accord

There are also sections copied when the author describes the conversion of Paul, but we will save that for when we finally are introduced to Paul in the series.

We also meet our friend, the alleged first martyr of Christianity, Stephen. It is interesting that, in the series, Stephen starts bragging about all the languages he can read, write, and speak. His family must have been loaded! And to a point where he can read, write, and speak four languages? That is uncanny! It seems to be too bad he looked so impoverished…oh wait, this is because what Stephen claims is nowhere to be found in Acts, in either of the two chapters that he is mentioned in.

What is funnier is that, a few moments later, we see Stephen trying to teach Peter how to read scripture. It is a clever call back to Acts 4 where it says Peter is unlettered, or uneducated. But there are a few problems with this; one, in Acts, it says Stephen is one of “the Hellenists”, or a Greek-speaking Jew. That is a problem because, ignoring the illiteracy issue, he is reading a text in HEBREW! More than that, Peter’s native language was Aramaic! So we have a Greek-speaking, illiterate man reading a Hebrew document, to an Aramaic speaking follower of Jesus. My brain melted when I saw this scene.

Stephen approaches the Sanhedrin while they are dictating some need, or desire, to enforce the law, and he starts to yell at them about Jesus bringing the new kingdom of God to earth and people lose their cool. In Acts, however, Stephen is arrested and brought before them. He has a much longer dialogue with the Sanhedrin (we are talking 51 verses), before they sentence him (not with a mob reaction, like how the show projects), and stone him to death. I feel, in Acts, Stephen is a bit more graceful than how he is depicted on the show at his death. But how graceful can a person be with stones being lobbed at them?

The scene with the disciples being flogged, I was surprised to discover, actually is in the Bible (5:40). But, historically, that seems unlikely. Assuming there was any truth to them being concerned about Jesus’ body being taken, coupled with all the soldiers and “witnesses” present at the crucifixion being executed, would we not think that the disciples would meet the same fate? Even if by Jewish standards (stoning instead of crucifixion)? Either way, we can assume that the flogging would not have been a real punishment, given that they were, essentially, continuing the insurrectionist movement Jesus started.

Also, when Caiaphas’ wife goes to Boaz’ fiancee (remember, Boaz is not found in the New Testament, like most of the content of this episode), the likelihood of her calmly trying to persuade the fiancee to turn over Boaz is ridiculous. The producers, or writers for the show, are assuming there was a “Law and Order” style of finding criminals during this time, or at least that is how they present it. Remember during my first post how I wrote about the unlikelihood of there being people present at the cross due to the risk of their own execution as a result? It would be more likely that they take her and execute her. I mean, they were already executing ten Jews a day (according to the producers of the show), so why not make Boaz’ fiancee one to join them?

This show truly is nonsense. No laser guns or aliens yet, but we have not met the apostle Paul yet. 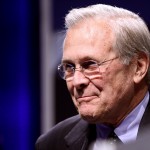 May 2, 2015
Donald Rumsfeld explains perfectly why people riot
Next Post

May 4, 2015 Fox News reports on fake shooting in Baltimore
Recent Comments
0 | Leave a Comment
"Tom Hughes --- Gee, you're clearly quite intelligent. I bet you're in Mensa. The MAJORITY ..."
markinator Clarification on the now viral Wisconsin ..."
"Source in the Constitution?Again, you have not replied to my argument about any "except for" ..."
Alonzo Donald Trump vowed to destroy the ..."
"Tom, I gave explicit instances when getting ID and registering to vote might be difficult. ..."
Annerdr Clarification on the now viral Wisconsin ..."
"You do realise that the only person we've seen throw the word nazi around is ..."
TheMarsCydonia The Danthropology blog is moving on
Browse Our Archives
get the latest from
Nonreligious
Sign up for our newsletter
POPULAR AT PATHEOS Nonreligious
1