Mike Huckabee says as president he would follow the ‘supreme being’ and not the Supreme Court on gay marriage May 24, 2015 Dan Arel

Speaking with Fox News’s Chris Wallace, presidential hopeful Mike Huckabee announced that if elected president, he would not listen to the Supreme Court if they ruled in favor of same-sex marriage because the court is not the “supreme being.”

“You seemed to indicate that as president, you wouldn’t necessarily obey court rulings, even the Supreme Court,” the host asked in an interview Sunday morning. “We have operated under the principle of judicial review since the Marbury v. Madison case in 1803.”

Huckabee replied suggesting that, “Presidents have understood that the Supreme Court cannot make a law, they cannot make it, the legislature has to make it, the executive branch has to sign it and enforce it.”

“And the notion that the Supreme Court comes up with the ruling and that automatically subjects the two other branches to following it defies everything there is about the three equal branches of government.”

“The Supreme Court is not the supreme branch,” he added. “And for God’s sake, it’s not the Supreme Being.”

Huckabee then, with an apparent lapse of memory asked how we would react if the Supreme Court picked the next president:

“We would say, ‘Well, they can’t do that.’ Why can’t they do it? They can’t do it because it’s not in the law,” he opined. “We are sworn to uphold the Constitution and the law. And it has to be consistent and agreed upon with three branches of government. One can’t overrule the other two.”

I assume he forgot that time that the Supreme Court elected George W. Bush president despite election results.

Huckabee has been in the news a lot this week, especially after coming out in vocal support of admitted child molester Josh Duggar.

You can watch Huckabee’s full interview below courtesy of Raw Story.

May 24, 2015
Josh Duggars police records ordered to be destroyed by judge with connection to Mike Huckabee
Next Post 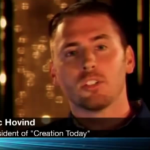 May 25, 2015 Creationist Eric Hovind: If evolution is true, then it wasn’t wrong for Josh Duggar to molest his sisters
Recent Comments
0 | Leave a Comment
Browse Our Archives
get the latest from
Nonreligious
Sign up for our newsletter
POPULAR AT PATHEOS Nonreligious
1