This 7-year-old girl stood up to a homophobic preacher (video) July 1, 2015 Dan Arel 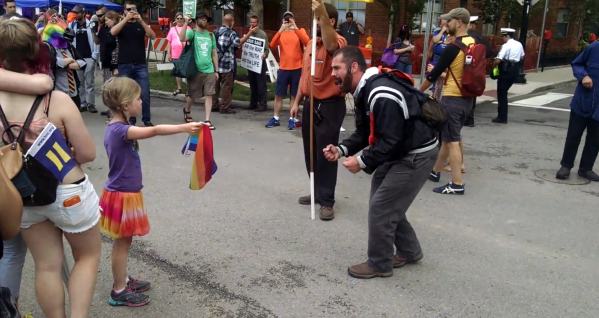 A 7-year-old girl, identified as Zea stood up to a homophobic preacher at a festival this weekend in Columbus, Ohio. The festival took place the day after the Supreme Court ruled in favor of marriage equality.

Comfest is a family-friendly, free, community music festival, not a parade or a march, however, the pastor thought it was appropriate to yell out anti-equality hate speech and Zea decided to confront him.

“Zea didn’t just flash the flag at that hatemonger, and bail. They went toe to toe, for several minutes, while he bellowed all of his fire and brimstone right in her face,” Ryan Bowling, Zea’s father wrote on Facebook. “Grown man vs first grader. She told me afterward that she did feel scared. The one thing the people of ‪#‎comfest2015‬ never let her feel though? Alone.”

A photo of the exchange has also been turned into a t-shirt with proceeds benefiting Zea and an LGBT non-profit of her parents choosing.

Zea’s father happened to catch the encounter on video: 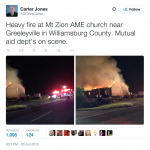 June 30, 2015
Now with a seventh black church on fire, will the mainstream media take notice?
Next Post

July 1, 2015 Sexual assault victim to file lawsuit against Josh Duggar
Recent Comments
0 | Leave a Comment
"Tom Hughes --- Gee, you're clearly quite intelligent. I bet you're in Mensa. The MAJORITY ..."
markinator Clarification on the now viral Wisconsin ..."
"Source in the Constitution?Again, you have not replied to my argument about any "except for" ..."
Alonzo Donald Trump vowed to destroy the ..."
"Tom, I gave explicit instances when getting ID and registering to vote might be difficult. ..."
Annerdr Clarification on the now viral Wisconsin ..."
"You do realise that the only person we've seen throw the word nazi around is ..."
TheMarsCydonia The Danthropology blog is moving on
Browse Our Archives
get the latest from
Nonreligious
Sign up for our newsletter
POPULAR AT PATHEOS Nonreligious
1