I was very pleased when Casper Rigsby asked that I write his foreword. I’ve interacted with him on numerous occasions and have worked closely together since the beginning of this year. His latest book Where’s Your God Now? (published by Atheist Republic) is an excellent piece on the existence of god, a subject I’ve tackled in my book Improbable: Issues with the God Hypothesis. Below you’ll find the foreword I was asked to write and hopefully it will provide an incentive to check out Casper’s book and his other available titles. 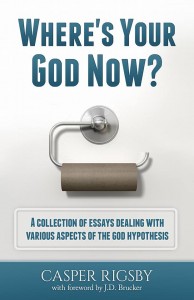 Given the answers we’ve found to many of life’s plaguing questions, we atheists can safely admit to ourselves that a belief in god requires not a smidgen of rational thought. Some may be convinced the reasons they’ve held for so long seem rational on the surface, it is only after a long and arduous journey could one come to realize the fault in their reasoning.

We must consider all options before settling on an answer. The answer we may reach won’t always please the mind. It may be an unpleasant, sometimes scary, conclusion. We may not be ready to accept the answers we find ourselves with. But, as any rational human being should, we must accept them until a more reasonable answer can be reached. This is what most atheists have confronted as they experienced their journey from theism.

The question surrounding the existence of god has troubled mankind for centuries, dating back to the most primitive and archaic civilizations. We’ve struggled in the past to find a reasonable method we can then use to determine the likelihood of the existences of the supernatural, let alone an invisible being said to work as if he was a puppeteer and we were his playthings. Things were mysterious to man in the past, of no fault of their own. They lacked the ability to understand the natural world around them, giving them the freedom to exercise their beliefs in things unseen and unexplainable.

Today, however, we are at a much different place in history. Today we understand the mistakes made by those who are our predecessors. We have corrected their ideas and introduced more viable, substantiated propositions without ignorance. This is possible for everyone to do today, yet so many dine on the emotional appeal of a nurturing god. Most are uncomfortable with the idea we are without the support of a god. From our earliest days as newborns, we cling to a higher power to provide us with love, affection, and meaning. We lose that as we grow older. With that loss, we look past our parents, toward a much greater being.

It is to no surprise to me that adult human beings, with the ability to reach reasonable conclusions, somehow find a way to allow their belief in a god to conform with the reality in which they dwell. We may see the sick and the poor, the theist may say, “God is guiding them through turmoil so as to humble them as he delivers them onto a more prosperous future.” We may see the hurt and the murdered, the theist may say, “If God truly wished for humans to believe in him, would he have made it so obvious?” We may see the evidence for evolution, the theist may say, “God truly works in a miraculous and awe-inspiring fashion,” or “We mustn’t trust in what scientist have discovered, for God is the true provider of knowledge.”

What I mean to express is this: For a belief to be as strong as it has been said to be by the theist, why must special pleading be used so whimsically? Why is retrospection rarely seen among the religious? It is because the belief in God is founded not on evidence but upon faith that is upheld by the emotional appeal certain theistic institutions propagate. This is my biggest grievance with a belief in a personal god, but Casper Rigsby provides a much more eloquent and enthusiastic display of reason in this book.

In Where’s Your God Now?, Rigsby does an amazing service for the atheist community, giving them a chance to reflect on the notion of god’s existence without needing prior knowledge of the subject. He empowers the reader to find the courage to think for themselves, to find the answers many have sought their entire lives. It is such an amazing privilege we have been given, by way of birth, that allows us to even contemplate our own existence, the meaning of our lives, and where we are set to carry on to after we have passed. Rigsby has certainly contemplated these things with much thought and ambition and this work stands as a testament to that fact.

I certainly feel as though a belief in god is purely unreasonable, from beginning to end. This idea is what spurred my own ambitions of writing and arguing for the countless number of voiceless and lost atheists and agnostics. Rigsby and I share the same sentiment, and for that I cannot ignore the influence he has on those who read his work. God is but a figment of the mind, conjured up during a time in which very little was understood. This belief fills gaps in knowledge, offers comfort when needed, and unreasonably builds a bridge between doubt and certainty. If you are a theist, do not hesitate to question your beliefs; honestly approach what Rigsby has to offer. God may or may not exist, but Casper Rigsby has done a damn fine job of crumbling the walls of faith and erecting reason where ignorance once stood.

You can find Casper Rigsby on Twitter at: @GodDoesntMatter

You can find his book on Amazon here: Kindle – Paperback 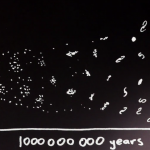 July 22, 2015
In just 8 minutes Neil deGrasse Tyson explains the brief history of everything
Next Post

July 23, 2015 5 of the worst scientific claims to come from the Christian right
Recent Comments
0 | Leave a Comment
"Tom Hughes --- Gee, you're clearly quite intelligent. I bet you're in Mensa. The MAJORITY ..."
markinator Clarification on the now viral Wisconsin ..."
"Source in the Constitution?Again, you have not replied to my argument about any "except for" ..."
Alonzo Donald Trump vowed to destroy the ..."
"Tom, I gave explicit instances when getting ID and registering to vote might be difficult. ..."
Annerdr Clarification on the now viral Wisconsin ..."
"You do realise that the only person we've seen throw the word nazi around is ..."
TheMarsCydonia The Danthropology blog is moving on
Browse Our Archives
get the latest from
Nonreligious
Sign up for our newsletter
POPULAR AT PATHEOS Nonreligious
1