Why the fight over ‘In God We Trust’ is unwinnable

Why the fight over ‘In God We Trust’ is unwinnable July 31, 2015 Thomas Essel

Several stories have been circulating around Patheos and other sites about various Sheriff Departments putting In God We Trust on their vehicles, posting religious imagery on their websites, and putting bible verses on their patrol vehicles. The Freedom From Religion Foundation sent cease and desist letters to many of these departments and the U.S Department of Justice is investigating the Stone County (MO) Sheriff’s Office for misuse of grant funds.

The Laclede County (MO) Sheriff’s Office recently jumped on the bandwagon and put In God We Trust on their vehicles as well. A local paper, The Lebanon Daily Record, conducted an online survey asking if people agreed or disagreed with the decision. The results demonstrate, in microcosm, why departments across the country keep pushing a religious agenda and getting away with it.

As of writing this, 49.6% of respondents answered, “I support the [Laclede County] sheriff’s department’s decision to display the decals because U.S. citizens should defend their right to practice religion publicly.”

In other words, 49.6% of people have absolutely no idea that the Sheriff’s Office is a government agency that does not have the same free speech rights as individual citizens; they cannot separate the person holding the office from the office itself.

A further 24.5% of respondents answered that they, “support the sheriff’s department’s decision to display the decals because it is a patriotic statement — ‘In God We Trust’ is the U.S. motto.”

How the mention of any kind of deity isn’t a religious statement is completely beyond me, but it is a statement that the U.S 9th Circuit Court of Appeals agrees with. In 1970, the court ruled that, “It is quite obvious that the national motto and the slogan on coinage and currency ‘In God We Trust’ has nothing whatsoever to do with the establishment of religion. Its use is of a patriotic or ceremonial character and bears no true resemblance to a governmental sponsorship of a religious exercise.”

Though that particular case, Aronow v U.S, was specifically about the use of the phrase on currency, it set the precedent that In God We Trust isn’t a religious phrase – something quite useful for government agents pushing their religious agenda today. Of course, In God We Trust was adopted as the official motto as a way to set the United States apart from the state-sponsored atheism of the Soviet Union. The court’s decision affirming the motto occurred right in the middle of the Cold War with the Soviet Union and the U.S – Soviet proxy war in Vietnam.

The lie is given to the claim that the phrase isn’t religious by the fact that 50% of respondents do, in fact, view the phrase as religious. After all, they view the use of In God We Trust as the Sheriff “defending [his] right to practice religion publically.”

The moral of the story is this: people will support any injustice so long as it aligns with their beliefs and prejudices. Any mental gymnastics required for justification will be performed with precision; whether that means pretending that freedom of speech extends to government officials acting in their official capacities or pretending that the mention of a deity serves some areligious ceremonial purpose.

In truth, the battle over In God We Trust is probably unwinnable at this moment. We are still living with the effects of Cold War propaganda, and that propaganda was extremely effective; nationalism and religion have become so intertwined in the United States that it is nearly impossible to see where one ends and the other begins. Until there is a shift in the consciousness of people about the role of religion – until people stop thinking that a sheriff has the same religious speech rights as they do, or that deities aren’t religious – expect all but the most blatant separation of church and state violations to go unnoticed or unpunished. 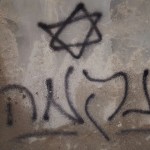 July 31, 2015
Jewish terrorists murder a Palestinian baby in its sleep
Next Post 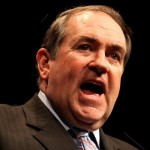 July 31, 2015 Mike Huckabee suggests that as President he would deploy troops to stop abortions
Recent Comments
0 | Leave a Comment
"Tom Hughes --- Gee, you're clearly quite intelligent. I bet you're in Mensa. The MAJORITY ..."
markinator Clarification on the now viral Wisconsin ..."
"Source in the Constitution?Again, you have not replied to my argument about any "except for" ..."
Alonzo Donald Trump vowed to destroy the ..."
"Tom, I gave explicit instances when getting ID and registering to vote might be difficult. ..."
Annerdr Clarification on the now viral Wisconsin ..."
"You do realise that the only person we've seen throw the word nazi around is ..."
TheMarsCydonia The Danthropology blog is moving on
Browse Our Archives
get the latest from
Nonreligious
Sign up for our newsletter
POPULAR AT PATHEOS Nonreligious
1