Answers in Genesis CEO and all around cranky old man, Ken Ham complained in a blog post this week that America is quickly growing intolerant of Christians, citing the legalization of same-sex marriage as evidence.

“It is quickly becoming more and more obvious that religious freedom is declining (quite rapidly) in America,” Ham wrote.

“Christians are increasingly being punished by the government for acting on their sincerely held religious beliefs about marriage that are based on the standard of Scripture. And we are hearing of more and more people being disciplined or fired from their jobs because they profess their Christian faith.”

He argued that a recent case in Ohio in which the Ohio Supreme Court ruled judges may not refuse to oversee a same-sex marriage, regardless of the judge’s religious beliefs.

This is common sense in a secular country in which government officials are not allowed to hide behind their religion when performing a public service.

Ham sees it another way, though. Writing that the ruling suggests that, “those who hold that marriage is for one man and one woman because of their ‘personal, moral, or religious beliefs’ are unfit to be judges.”

You have to have a vivid imagination to read the ruling in that way. Perhaps the imagine of someone who can view the evidence for evolution and see Biblical creation.

Of course, Ham’s crazy imagination doesn’t stop here. He then goes on to warn that should such a court opinion become law, that it would “set up an anti-Christian litmus test for any judicial officer in the state.”

But activist judges are not the only enemy Ham sees. He also attacked Christians who support marriage equality.

“So, judge or otherwise, you are using your religious worldview — God’s Word or man’s ideas — to make your decisions. There is no neutrality! It all depends on your worldview, and Christians shouldn’t be excluded from using their worldview to make decisions any more than a secular judge should be. Sadly, Christians are being increasingly marginalized and punished in this culture — yes, it’s real persecution,”  Ham complains.

Ham is really upset that he cannot be a bigot without consequences any longer. Before the Supreme Court ruling, he felt as a Christian he had a right to deny equality to those he did not agree with and had a rather rude awakening when he realized that being Christian was not a free pass to be a giant asshole.

America has grown tired of intolerance and those like Ken Ham are going to lose one right, the right to discriminate and treat others like second class citizens.

No one forced Ham to move to America. If he doesn’t like the laws passed, I am more than happy to show him the door. 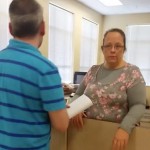 September 2, 2015
Kim Davis should listen to the Bible and issue marriage licenses
Next Post 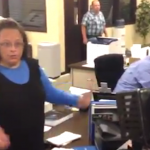