The Original Motto Project sets out to tackle the problem of In God We Trust October 27, 2015 Thomas Essel 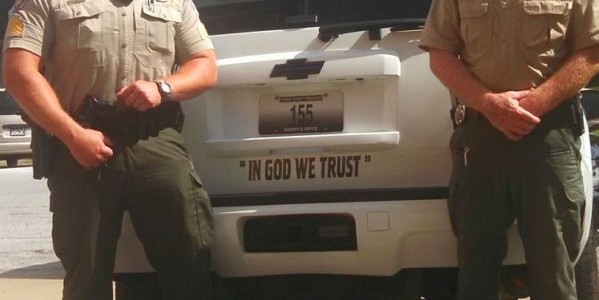 Law enforcement agencies and local governments across the south and midwest cannot get enough of showing off their overly-nationalistic mentalities, and since “America, Fuck Yeah!” would be unprofessional, agencies from south Texas to northern Missouri have chosen In God We Trust as their preferred substitute. It is a trend that has gone viral.

These government agencies plaster the supposedly nonreligious phrase all over their vehicles and call it “patriotism” or “representative of their commitment to the community.” In reality, nearly all of the sheriffs and police chiefs making a show of the phrase are right-wing, tea-partyesque, Jesus lovin’, gun totin’ fundamentalists. They are the kind of people that make Ken Ham feel all warm and fuzzy inside.

For anyone concerned with secularism, but not aware of the extent of the problem, The Original Motto Project has put together a handy map of every single sheriff’s department and police department in the country that displays the obviously theistic motto. The Original Motto project is a nonprofit based in Washington state that opposes the use of In God We Trust and wishes to replace it with the original, less divisive motto E Pluribus Unum. You can check out the map here and also get the addresses for the agencies, should you feel like penning them a love letter.

Soon to come is a map displaying all the city and county governments that display the offending motto, but that may take some time to put together; according to Robert Ray, National Director for The Original Motto Project, there are over 600 agencies to list. Needless to say, he has his work cut out for him. 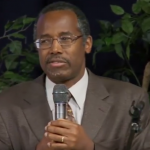 October 27, 2015 5 amazingly ignorant quotes from Republican candidate Ben Carson
Recent Comments
0 | Leave a Comment
"Tom Hughes --- Gee, you're clearly quite intelligent. I bet you're in Mensa. The MAJORITY ..."
markinator Clarification on the now viral Wisconsin ..."
"Source in the Constitution?Again, you have not replied to my argument about any "except for" ..."
Alonzo Donald Trump vowed to destroy the ..."
"Tom, I gave explicit instances when getting ID and registering to vote might be difficult. ..."
Annerdr Clarification on the now viral Wisconsin ..."
"You do realise that the only person we've seen throw the word nazi around is ..."
TheMarsCydonia The Danthropology blog is moving on
Browse Our Archives
get the latest from
Nonreligious
Sign up for our newsletter
POPULAR AT PATHEOS Nonreligious
1