The Christian Right fully support terrorism against Planned Parenthood and many took to Twitter to support and show praise for Robert Lewis Dear after he opened fire inside a Planned Parenthood clinic in Colorado Springs, Colorado killing three people including a police officer responding to the call.

I have a policy to never block out Twitter names, as they have said these things publicly and deserve to be recognized, but I came across some of these on BuzzFeed and they were blocked out already.

This is the “pro-life” movement:

They are obviously fans of Matt Walsh, who probably had a hard-on throughout the entire shooting.

Planned Parenthood employees risk their lives, as MissAmbear correctly points out, but some coward believes those who work and visit the life-saving clinic deserve to die. 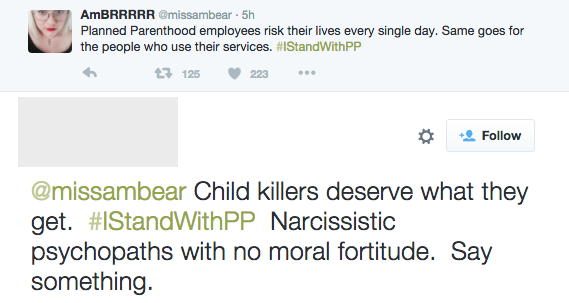 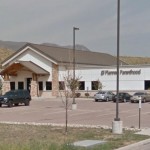 November 27, 2015
Christian terrorism is a bigger threat to U.S. freedom than Islamic extremism
Next Post

November 28, 2015 Planned Parenthood shooter commented 'no more baby parts' according to witness
Recent Comments
0 | Leave a Comment
"Tom Hughes --- Gee, you're clearly quite intelligent. I bet you're in Mensa. The MAJORITY ..."
markinator Clarification on the now viral Wisconsin ..."
"Source in the Constitution?Again, you have not replied to my argument about any "except for" ..."
Alonzo Donald Trump vowed to destroy the ..."
"Tom, I gave explicit instances when getting ID and registering to vote might be difficult. ..."
Annerdr Clarification on the now viral Wisconsin ..."
"You do realise that the only person we've seen throw the word nazi around is ..."
TheMarsCydonia The Danthropology blog is moving on
Browse Our Archives
get the latest from
Nonreligious
Sign up for our newsletter
POPULAR AT PATHEOS Nonreligious
1